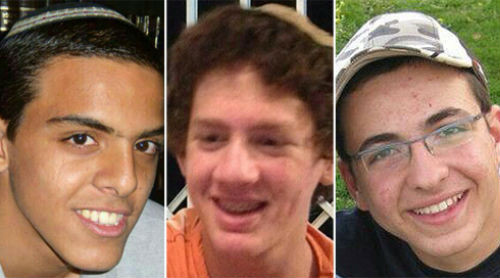 Shuls from the Five Towns and Far Rockaway called on members to pray and adopt additional good deeds in a spiritual effort to help find and free three Israeli boys kidnapped by terrorists last week.

Two 16-year-old students of Yeshivat Mekor Chaim in Kfar Etzion joined a 19 year old student of Yeshivat Shavei Hevron at a recognized hitchhiking spot on the road by Elon Shvut in Judea Thursday night at about 10 pm. Bus rides are infrequent in the area and residents and students often get rides from passing cars driven by Jewish residents of the many towns in the Gush area and beyond.

On Long Island and in New York, inboxes were flooded with desperate emails calling on recipients to say certain chapters of tehillim (psalms) and to resolve to study Torah for the captives and undertake to increase the doing of good deeds.

At Kneseth Israel — the White Shul in Far Rockaway — Rabbi Eytan Feiner held a kenes tehilim at mincha on Monday, and then spoke to the men and women gathered there. He spoke of Moshe Rabbeinu who the Torah first describes as a boy and then as Moshe, that the change in what “defines him” was when “his emotions fused with his brothers” and he saved the Jew being beaten by the Egyptian.

“Had he not sacrificed and saved that one Jew he never would have been Moshe Rabbeinu,” cried out Rabbi Feiner. “When one Jew needs your help you stop what you’re doing and help. If a non-Jew is attacking one of your brethren, take out a siddur, a tehilim and give your all, your mesirus nefesh (self-sacrifice) as if this is your only son! If one, then al achas kama vkama (even more so) three! Show Hashem we are one. Take a picture of these boys, stare at their faces, the tza’ar (suffering) they and their families are going through.

Rabbi Feiner quoted Naftali’s mother, “We know the Jews are tearing the Heavens with their prayers.”

“Hashem wants us to change, this tragedy to three bachurai yeshiva (yeshiva students) is a wakeup call,” he continued. “They are your children, your brothers. Don’t waste time, Hakadosh Baruch Hu (G-d), bring them home safe and sound. Pour our hearts out to Avinu Bashamiyim (our Father in Heaven). Please bring them home tonight!”

Rabbi Feiner later told The Jewish Star, “We do not have neviim (prophets) in our time, we don’t know why this is happening. We are seeing that it’s bringing us together, we care for every Jew regardless of background and how they dress. Achdus (unity). Sinas chinum (purposeless hatred) destroyed Bayit Shaini (the second Temple)”

Unity must “occupy center stage,” along with mercy and good deeds, rachmanus and gemilas chasadim, he said. “We have to genuinely care for them, davening, crying, losing sleep over them. We have to nurture this unity without any calculations, get rid of the senseless hatred.”

Rabbi Adin Even-Israel Steinsaltz, founder of Yeshivat Mekor Chaim, called the kidnapping “shocking, painful and frightening” and noted his gratitude for the IDF and calling on Jews to “add more holiness and learn more Torah. If we can, each of us should take upon ourselves something additional, no matter how small, especially and explicitly devoted for the sake and well-being of the missing boys.” He also called for reciting Psalms 142 and 143.

Naftali Frankel, 16, has dual U.S. and Israeli citizenship. His mother, Rachel Frankel, who lives in Nof Ayalon near Modiin, spoke to her son through the media on Sunday, telling Naftali that “Mom and Dad love you to no end, and Israel will bring you back.”

She thanked everyone for their prayers and the Israeli forces, officials and media for their efforts to find the boys. The other parents spoke to their sons through the media with similar messages.