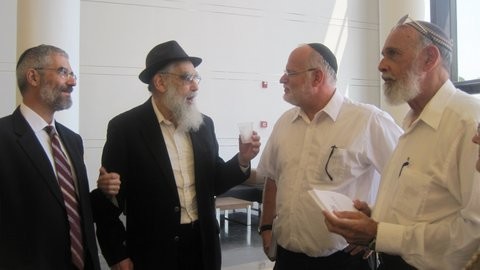 They quietly and matter-of-factly describe the fierce battles that led to their injuries, but their eyes relive the events and the pain at the injuries and deaths of their fellow soldiers, their brothers. Yet they are determined in what they have to do, wanting to recover and return to their duties, although some, due to injuries, will not.

During a ceasefire in Protective Shield, the battle with Hamas in Gaza, The Jewish Star accompanied a small group of American expatriate rabbis and one current American rabbi to visit wounded IDF soldiers at Tel Hashomer Hospital in Ramat Gan, Israel.

Most of the soldiers are deep within the healing process; some were injured severely and those who see them now are astonished at their miraculous recoveries.

The visitors came to thank these young men who willingly walked into the line of fire to destroy the mechanisms, the tunnels, whose sole purpose was to terrorize and kill Jews in farms, homes and kindergartens and to kidnap and hold hostage.

After weeks of rockets pummeling Israeli cities and towns and terrorists emerging from tunnels to kill, Israel had no choice and launched a counter attack to attempt to stop the incessant bombing and dastardly threat of underground invasions.

During the torrent of rockets from Gaza, when Israel launched a ground invasion to locate and destroy the terror tunnels and missile launchers and counter air strikes with targeted fire, many Israelis and visitors came to show their appreciation to the soldiers. By last week, the flood had turned to a trickle.

The rabbis listened to the soldiers’ stories and took their Hebrew names; they said a Mi Shebairach (blessing for healing) for each soldier, with everyone else in the room responding, “Amen.”

One soldier lost his leg under the knee in a rocket attack; he calmly described the intense burning pain, a medic’s placing of the tourniquet and, as he patted the bandaged stump, that he will receive and then walk with a prosthesis.

Another noted that the medications he was taking suppressed his appetite and he lost 11 kilo so far. When he was told of the love and support of the New York Jewish community, his eyes widened and moistened, surprised that a visitor would choose to spend a day in Israel in a hospital.

Another described a booby trapped house in Gaza at the mouth of a tunnel, the device triggered by terrorists, the site engulfed in flames.

There were soldiers with shrapnel; a soldier without fingers, one with a stapled skull, with skin grafts, their bodies speckled with shrapnel wounds. Family members maintain a vigil at each soldier’s bedside.

Meyer and the rabbis handed out letters of gratitude and support to the soldiers from a pile of a thousand, written by supporters of the IDF worldwide on the Young Israel website. One letter was from Tammy Friedman of Woodmere.

One soldier said that he saw G-d’s hand, miracles, that he was showered with shrapnel in an attack but the area where his tzitzit and his friend’s tzitzit were were free of shrapnel. He said a bullet pierced a soldier’s helmet, from one side to the other in the space over his head, but didn’t graze him.

As the group turned to leave, two soldiers lined up in their wheelchairs, maneuvering down the hall, demonstrating wheelies, balancing, tilting the wheel chairs up on their back wheels.