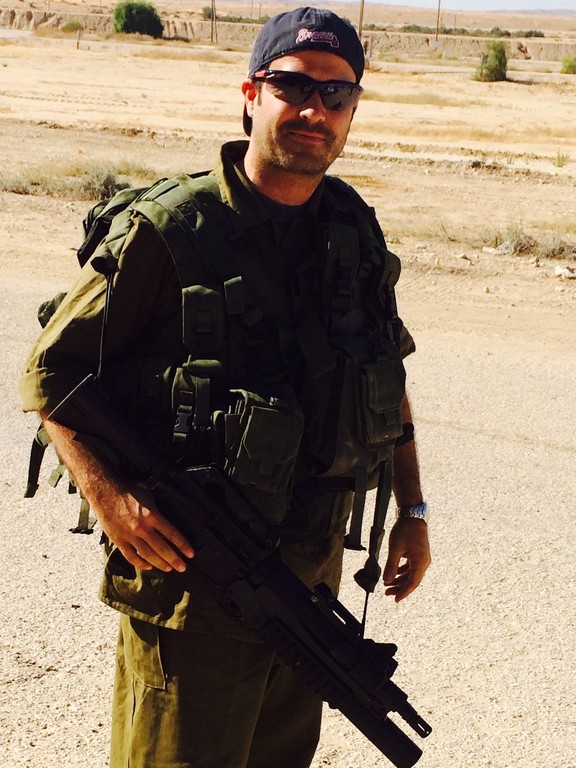 Sergeant Major Rabbi Jeremy Gimpel of the IDF’s Givati brigade drew a standing room only audience after Shacharit last Shabbat when he spoke of his unit’s action in Gaza and of his perspective on Jewish history, religious Zionism, and clarity of vision in combat. He drew returning crowds two more times during the afternoon at the Young Israel of Woodmere.

Throughout the Torah, Jews are exhorted to zachor (remember) — be it the Exodus from Egypt, creation, Shabbat, Amalek — all part of our national consciousness, he said.

Gimpel stressed the unity of the Jews in Israel and worldwide during the recent war against Hamas, noting that Jews from 40 nations are represented in his unit.

He said he sees the words of the Prophets in the blossoming of the land and the return of Jews to Israel and in the growth in Torah learning in Israel. He marveled at the Iron Dome, describing how the missiles from Gaza explode on their own with great noise in empty fields but when they are headed for population centers and are intercepted by the missiles from the Iron Dome defensive system, their destruction is almost silent.

Gimpel described the smoke trail as the rocket flies towards Israel and it is almost as if the finger of G-d silently touches and destroys it in the sky above.

Gimpel opened the Tanach in his second talk to compare the events described in the book of Ezra from 450 BCE, the return of Jews after the destruction of the first Temple and the 70 years of exile, to the return of Jews to Israel and the flowering of the land in the last 70 years. The similarities of the rebirth of Hebrew among the Jews, the struggle to rebuild Jerusalem and of foreigners who recently moved to the land trying to claim it as their own and sabotage the Jews’ efforts to rebuild, enlisting foreign powers to hinder the reconstruction.

He said that the book of Ezra is “the greatest piece of advocacy for the State of Israel and Zionism” and that “anti-Zionists haven’t spent much time delving into the Tanach.” He also quoted from chapter 36 of Ezekiel describing G-d bringing the Jews back first and then purifying them and returning them to the Torah and describing the flowering of the land only when the Jews are in it.