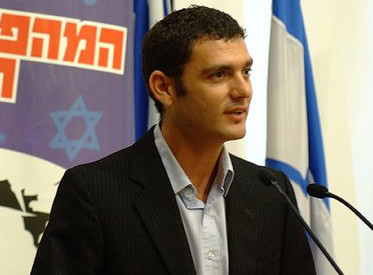 Matan Peleg, CEO of Im Tirtzu, spoke on Shabbat at the Young Israel of Woodmere.
By Malka Eisenberg

The battle for the hearts and minds of college students and the future of the Jewish nation is currently being waged across college campuses not only in the U.S. but now in Israel as well.

Im Tirtzu (If You Will It), a student-led organization founded in the wake of the Second Lebanon War in 2006, is at the forefront of that battle in Israel and has come to the United States to open the eyes of Jews here as well.

Wearing a talit and kipa seruga, Im Tirtzu CEO Matan Peleg spoke after davening on Shabbat in the Joseph K. Miller main shul at the Young Israel of Woodmere. Rabbi Hershel Billet stressed the vital importance of the work of this organization.

Peleg, pointing out how Zionism was being undermined by various groups in Israel, said Im Tirtzu was represented on 13 campuses there in a bid to restore Israelis’ ties with the ideals of the country’s founders.

During a conversation with The Jewish Star in Hebrew after Shabbat, Peleg said that Im Tirtzu’s goal is to raise awareness of efforts to delegitimize Israel, he said.

“The Knesset members don’t realize that every anti-Zionist organization gets funding from Europe and the New Israel Fund (NIF). It is the involvement of outside forces from foreign countries,” he said.

He also cited the notorious and since discredited Goldstone report that falsely defamed Israel’s actions in the previous Gaza War, Cast Lead-Oferet Yetzuka, and hurt Israel with unfounded charges of racism. “We work hard against this and in academia to expose this.”

He cited a recent report that law students at the University of Haifa are required to work as lawyers in legal aid clinics and that some of these clinics are primarily geared to helping terrorists who have actually hurt Israelis. He said that it negatively affects the students, and teaches delegitimization to students who served in the army. “We are fighting against this, it is happening all the time,” he said.

Peleg said his group is working against the proposed second Goldstone-type report regarding the most recent conflict in Gaza, Operation Protective Edge, and is collecting thousands of signatures from people in southern Israel to attest that Israelis suffered from war crimes.

The biggest problem in the U.S., said Peleg, is the organizations that call themselves Zionist but are the opposite, like J Street and the NIF.

“They are more dangerous than BDS,” he said. “They call themselves pro-Israel but aren’t. They are more influential. The Jews have no answers [to them], it influences them and takes Jews away from Israel and Judaism. We have to fight this. J Street is a big problem, they injure the Jewish nation.”

Peleg said that Im Tirtzu works to fight their actions by “exposing them, what they are doing, their lies.”

“The light of the sun is the true purifier to every problem,” he said. “In my father’s era it was clear that Israel had a right to exist. Because of propaganda it is not so clear to students now.”

Im Tirtzu is working with college and high school students to reeducate them on the importance of the State of Israel, working to “make a new generation of teachers to be Zionist,” he said.

For leaders of the future, “the elite, the public discourse shapers, we want to see that Zionism burns in them, the spirits of Israel and Judaism.”

Peleg lives with his family in Jerusalem, served in the army in the armored division and has a degree in Middle Eastern History and Government from Haifa University and a Masters degree in conflict resolution from Hebrew University.

Ronen Shovel founded Im Tirtzu when he was a student at Hebrew University, realizing that the State of Israel cannot thrive without Zionism.

“Many people joined and wanted to open other branches. It is the strongest and most active group against anti-Semitism and anti-Zionism in Israeli society and currently has 16,000 members and thousands of supporters, with 45,000 on Hebrew Facebook.”