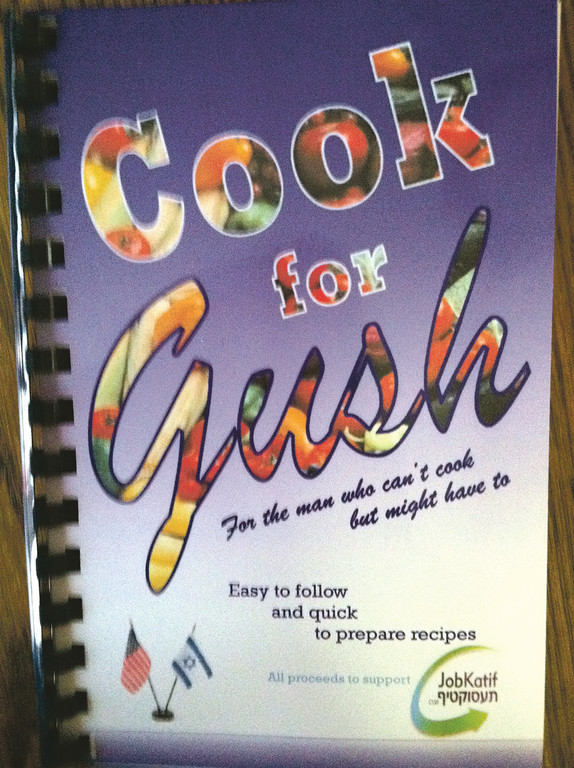 Miriam Baum-Benkoe has once again cooked up a way to act on her principles, and turn motivation into action to help others.

The Oceanside retired school teacher has launched her second charity raising cookbook, this one to raise funds for JobKatif. “I made up my mind to do something,” she said.

“Cook for Gush: For the man who can’t cook but might have to,” has 54 pages of recipes, most with three recipes per page. It is divided into five sections: main dish entrees, vegetables and sides, soups, salads, sauces and spreads, desserts and breakfast is ready. Each section divider has the biography and story of someone who lived in Gush Katif but was forced to leave at the time of the expulsion in August 2005.

Two years ago, Miriam went to visit Israel; she hadn’t been there in 43 years. She was astounded by the changes and growth that she saw there. “My husband said that my mouth was open the entire journey,” she recalled. One of her stops was to the Gush Katif Museum in Jerusalem that describes the painstakingly built up 30-year-old Jewish communities in the Gaza Strip that were forcibly evacuated and destroyed in 2005. The land and infrastructure were given to the Arabs there who plundered and destroyed whatever remained and used the sites for launching missiles and rockets into Israel.

She said that what she saw at the museum was “emotional and heartbreaking.”

Miriam resolved to help the 9,000 residents who lost their homes, businesses and livelihoods by launching and selling this cookbook. But this was not her first chesed, fund raising project. “After 9/11 I got a button making machine,” she recounted. She made buttons with the phrase “united we stand” printed on them and stood in shopping malls selling the buttons. She gave the money to Newsday who had pledged to double whatever money was sent to them for 9/11 to help first responders injured or killed there and their families.

Eight years ago, Miriam produced a cookbook during the “Second Intifada,” a time when Arabs increased their terror attacks against Israel. “I started collecting family favorite recipes from the United States and Israel, many from Gush Katif families,” she said. “It was before the displacement; the communities there were going well. Some of the recipes called for two cups of Gush Katif broccoli. One Family Fund contacted me—they found out about the project. The funds were fed through them. They knew who was in the hospital and where the money should go. There were no administrative costs. That cookbook raised $25,000. I was very excited about that. People still stop me on the street and ask ‘can you reprint it?’ It was reprinted three times. People were very excited to help the bombing victims. It was my idea.” The cookbook was called “United We Cook: the American Jewish community cooks for Israel.” Recipes came in on websites from all over, from Kansas, California, Canada, and locally, the Five towns, Teaneck, West Hempstead. She sent out notices via community websites, on bulletin boards, in mikvehs, shuls and word of mouth. She used the services of a typesetter and graphic artist and printed the spiral bound book through a cookbook publisher. “They were wonderful,” said Miriam. “We went to them for this book, too.”

The success of that initiative motivated her to “try to do something for the people of the Gush who are practically forgotten already,” she noted. “It moves me to do things even if I can’t go there to volunteer. It’s one thing to talk, another thing to do, to move to action. You can feel sad and be moved but moving to action, getting off your duff and moving” is what’s important.

All the funds go to JobKatif, an organization whose goal is to provide rehabilitative employment services to the displaced families from Gush Katif and Northern Samaria. Called to assist the evicted families, Rabbi Yosef Tzvi Rimon from Alon Shvut, Yeshivat Har Etzion and the Midrasha L’Nashim at Migdal Oz, gathered volunteers to help the evictees to restructure their lives economically and recover from the emotional trauma they experienced, retrain and find jobs and homes. JobKatif is recognized officially by the Israeli government as the organization that works to solve the problems of the expulsion from Gush Katif. Rav Rimon received the 2008 Presidential Award for Volunteerism for his role in JobKatif. As of November 2012, over 2,300 people have found new jobs, 531 took vocational retraining courses and 230 new businesses were launched in Israel via JobKatif.

“Those people went to live there to make a stronghold,” stressed Miriam. “The government pulled the rug out from under them. JobKatif is dedicated to helping these people retrain and get other occupations. It’s certainly worthwhile to channel funds to them and help them.”

Miriam Baum-Benkoe stressed that she has “a sincere passion for chesed. It directs my life. What’s my next project? I’m keeping it under wraps for now. You don’t realize until after the fact the impression your activism has on your children. My daughter is active in chesed in her shul.” Miriam also volunteers in South Nassau Communities Hospital.

As for the cookbook, “they are simple recipes, easy to follow and quick to prepare. It took two years to produce. I started selling the book Purim time and already sent over $1,000 to JobKatif. A page in the book tells where to write a check for a charitable donation. I asked for easy family favorites. If it was too complicated it didn’t go in. If a wife is not able to cook, if she is away, or ill, the man can cook himself with his own two hands. It’s expensive to buy—just make.” Her husband gave her the idea to produce a cookbook for men. Some of the recipes include potatoes Ana, crumb-topped baked chicken, roast/grilled seasonal vegetable, and the best parve ice cream.

All the $36 for each cookbook goes directly to JobKatif, she said. Call 516-678-1585; email miriambaum@optonline.net: send a check to Central Fund for Israel, with JobKatif in the memo to 3530-44 Long Beach Road, Oceanside, NY 11572. For more information go to: jobkatif.org.il/english/