Kosher and then some 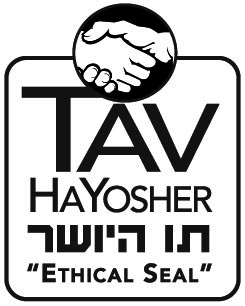 At Café Nana, a quaint, privately owned restaurant in the Columbia University Hillel, a new type of certification adorns the wall. Unlike the eatery’s hechsher, which certifies that the food being prepared is strictly kosher, this one, known as the Tav HaYosher, ensures something entirely different, best explained in the words of Alex, a Mexican immigrant who works in the kitchen: “It’s good,” he said. “They come here and ask how much [I get] paid.”

Tav HaYosher, an initiative by the Orthodox social activism group Uri L’Tzedek, is a hechsher for workers’ rights. It ensures that basic labor conditions in restaurants are met: workers are paid at least minimum wage and given overtime, and restaurants maintain a safe work environment. Each restaurant that has the seal receives a visit every four to six weeks by a compliance officer who goes through the restaurant payroll and speaks confidentially to employees about working conditions. So far six restaurants in New York City have signed up alongside one supermarket.

Uri L’Tzedek reached prominence last May after launching a boycott against the Rubashkin meat processing plant following a federal raid that netted some 500 illegal immigrants and reports of poor working conditions. The date of Tav HaYosher’s launch this past Tuesday coincided with the anniversary of the raid.

“Rubashkin showed a lack of internal transparency and accountability,” explained Shmuly Yanklowitz, the co-director of the organization, over a bowl of green Café Nana soup. “It showed how unprepared the Orthodox leadership is to tackle our problems.”

The program is available at no cost and is administered entirely by 100 or so volunteers led by Yanklowitz, who is over six feet tall and speaks in the commanding tones of a military officer. He hopes the certification will develop an economic clout that persuades other kosher establishments to sign on.

“What these people will realize is there is power in the seal and they’re only going to get business if they have it,” he explained. “We want to win Manhattan, then expand into New York, beyond Manhattan and into other cities.”

Yanklowitz said that he had inquiries about the seal from restaurants in Washington, D.C. and Chicago. The certification also marks a practical step for the organization.

“Social change is pragmatic,” Yanklowitz declared. “The majority of restaurants are horribly abusive and very few are paying minimum wage. We have to move away from naïve idealism to work towards having money in pockets and dignity in the kitchen.”

Letters about the Tav HaYosher were sent to every kosher restaurant in New York City; many were visited by Uri L’Tzedek representatives, Yanklowitz said. “It is highly unlikely that any establishment does not enter into the Tav for any reason other than not meeting the standards,” he noted.

The initiative has so far met with praise. In a statement released on the Uri L'Tzedek web site, Rabbi Haskel Lookstein condoned the effort and said that the Cong. Kehilath Jeshurun kosher list, considered the authoritative list of kosher eateries in Manhattan, would mark those restaurants that do have the seal.

A past critic of Uri L’tzedek has also offered praise: “Any effort to protect worker's rights is certainly praiseworthy,” said Rabbi Avi Shafran, a spokesman for Agudath Israel. “If the standards the certification plans to use are those of American law, it will simply be assuring consumers that dina dmalchusa [local law] is being observed by an establishment. That is a worthy thing.”

In the Five Towns, most restaurants hadn’t heard about the certification, but weren’t opposed to it. “I want to be Zagat certified,” joked Moshe Orlofsky, the owner of Off the Grill. “You should see how the customers treat my waiters.” Then he added, more seriously: “I treat my workers well for ethical reasons and from classic business philosophy.  You treat your workers well and they treat you well.”

Feeding your pets on Passover

Gourmet Glatt Emporium,Prepping for Pesach: Behind the scenes at LI’s premier kosher market