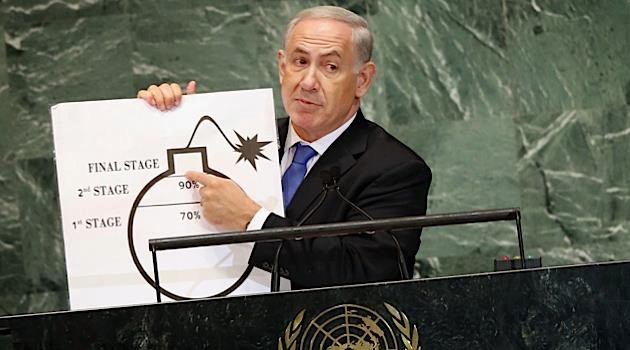 In all the traffic and confusion that is New York on the week the United Nations General Assembly is in town, there were some very important events that occurred that few may have paid attention to. Some people have become all worked up over the timing of the final address of Iran’s President Mahmoud Ahmadinejad to the Assembly, for it was on Yom Kippur; the highest and most solemn of the Jewish holidays. Echoing the war that was launched on October 6, 1973, while Jews prayed the future and took stock of their past, some saw the timing as an affront.

I saw it differently, who cares what he has to say and it is better that we give as little credence to him as possible. We know what he thinks, we understand his hatred for the west and for Israel, and nothing he said came as a shock. We are prepared for his vitriol and appreciate the risks that his regime pose whether or not we heard him speak.

There was a speech that when largely unnoticed though, and maybe it should have been given more attention, and that was the one by Egypt’s new President Mohammed Morsi. The voice of the Moslem Brotherhood spoke with a clear intent to show his dominance over a new Arab world, and in his words, made some very strong statements that he probably did indeed make knowing that his speech would be largely underreported.

His speech, which dealt heavily on Palestinian and Syrian issues and equally as strong on the desire to protect and defend Islam around the world, never mentions Israel once but talks about peace and human rights, dignity for Palestinians. It is alluded to, and in its allusions are either an attempt at double speak or a genuine positive overture.

Morsi attacked the makers of the YouTube video that was claimed to be the reason for the murder of the United State’s Ambassador to Libya Chris Stevens and three other diplomats, as well as the other embassy attacks across the Arab world. While he said that his country had tolerance, it would not tolerate attacks on Islam from anywhere, “We will not allow anyone in word or deed that insults and harms Islam,” and he followed it with the warning, that they will “not to accept or allow foreign concepts to interfere with that,” alluding to the U.S. right to free speech.

Yet, his words left the door open to more tolerance, “[we] must move together to confront extremism discrimination or incitement to hatred on basis of religion or race.” Morsi proudly addressed his new Egypt’s desire to defend tolerance; “Egypt respects freedom of expression that is not used to incite hatred against anyone, and not a freedom of expressions that targets a specific religion or a specific culture.”

Will he be held to his word if Jewish interests and Israel are attacked or did he mean everyone else but Jews? That remains to be seen, but the lack of coverage on the day of his speech offers some cover for him if this was classic Arabic double-speak.

The day after Yom Kippur, it was Israel’s turn and Bibi Netanyahu lit up the stage with a tremendous presentation that went clearly over his allotted timeslot, noted by the long-blinking red light on the speaker’s podium. Maybe he did it on purpose to match the red light to his call for a clear redline on Iran’s nuclear ambitions.

Netanyahu offered what may have been the clearest pitch for forewarning of the potential for the days of a radicalized Islamic hegemony. He laid out the differences between what he referred to as the battle between modern and medievalism; a world in which women are subjugated, knowledge is suppressed and death is glorified or a world where we embrace the new while respecting and enhancing traditional values. He talked about the printing press and how it changed the world and said that medievalism will be beat, but “how many lives will it take before that happens.”

In what was the highlight of the United Nations speeches for everyone, judging by the chatter on the Internet, Netanyahu took out a simple chart – a picture actually – of a bomb. He showed where he believed was Iran’s progress on achieving nuclear bomb , at 70% and said that the next was the second stage which would be 90%, then the fuse – 100%. He drew a redline on the 90% line and said that we had to stop Iran before completing the 90% stage.

To make his point, Netanyahu raised the comparison to the Marxists Russian regime of old and said that self preservation came before idealism, and raised the worlds of Bernard Lewis that declared, “mutually assured destruction is not a deter ant, but an inducement” for radical Islam. Then reiterated the words of Akbar Hashemi Rafsanjani, an influential Iranian politician and writer and fourth President of Iran who said something like, a nuclear bomb in Israel will destroy Israel, but will only slightly harm the rest of the Middle East.

There were no softballs by Netanyahu, he came with fire and brought a chart. While Egypt’s new president made some promises we doubt he plans to truly deliver on, Netanyahu emphasized that Iran’s president and radical Islam will indeed deliver on all that they say. The redline must be drawn now.

While declaring to anyone who challenges the Jewish place in Israel and in history, Netanyahu declared that the “Jewish people have come home, and we will never be uprooted again. He drew a line in the sand, saying that he will defend Israel with the indomitable courage of Joshua David and the Maccabees of old. That message was heard loud and clear.

Juda Engelmayer is an executive with the NY PR agency, 5W Public Relations