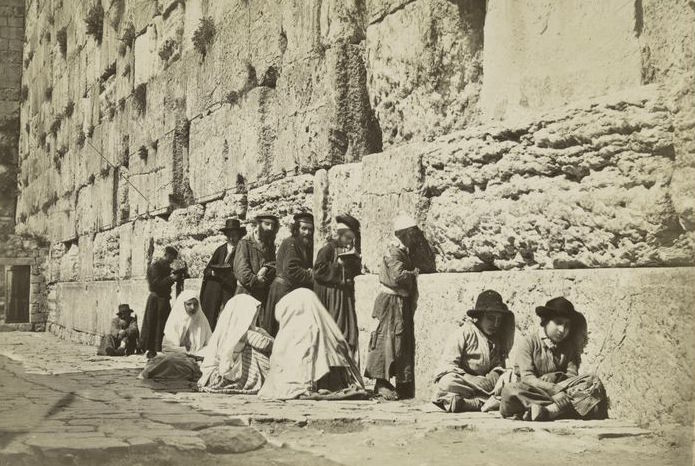 Jews pray at the Western Wall, circa 1880.
Félix Bonfils via WikiCommons
By Morton A. Klein, National President, Zionist Organization of America

It’s time to end the propaganda myth that Jerusalem is holy to Muslims.

Jerusalem was the capital of the Jewish nation under King David and other Jewish kings for hundreds of years. The U.S. Jerusalem Embassy Act of 1995 stated: “In 1996, the State of Israel will celebrate the 3,000th anniversary of the Jewish presence in Jerusalem since King David’s entry.”

Jerusalem was never the capital of any other nation. After the Arab conquest of Israel in 716 CE, the Arabs made Ramla their capital, not Jerusalem.

Jerusalem is the Jewish people’s holiest city. Jerusalem’s Old City (in the eastern portion of Jerusalem, the real Jerusalem — Western Jerusalem was built in recent years) contains the millennia old Jewish quarter and Judaism’s holiest site, the Temple Mount, where the first and second Jewish Temples stood, long before the birth of Islam. And eastern Jerusalem also contains the world’s oldest and largest (3,000-years-old) Jewish cemetery on the Mount of Olives.

Jerusalem is mentioned almost 700 times in the Torah, the Jewish holy books. Jerusalem is never mentioned in the Koran — not even once.

Throughout the millennia, Jews have been praying for Jerusalem 20 times each day, remembering Jerusalem in holiday and wedding ceremonies, and praying facing Jerusalem. By contrast, Muslims pray facing Mecca. There are no Muslim prayers for Jerusalem.

Significantly, neither the Palestinian Liberation Organization (PLO)’s original National Charter (drafted in 1964, during Jordanian Muslim rule), nor the PLO’s 1968 National Charter, nor the Fatah (Yasser Arafat’s terrorist group) Constitution even mention Jerusalem, let alone call for its establishment as a Palestinian Arab capital.

Muslims make their pilgrimages to Mecca, while Jewish pilgrimages are to Jerusalem. One of the five pillars of Islam (the five obligatory fundamental Muslim practices) is the “Hajj” pilgrimage to the Kaaba in Mecca, Saudi Arabia. The Torah commands the Jewish people to make pilgrimages to the Temple in Jerusalem three times each year, on Judaism’s three pilgrimage festivals (Passover, Shavuot, and Sukkot).

Jews have lived in Jerusalem throughout the millennia. Since at least the mid-1800s, the majority of the people living in Jerusalem were Jews. Theodore Herzl wrote in his diary about his arrival in Jerusalem on the evening of Oct. 31, 1898: “The streets were alive with Jews sauntering in the moonlight.” The 1907 prestigious Baedekers’ Travel Guide reported that at that time, Jerusalem had 40,000 Jews; 13,000 Christians and 7,000 Muslims.

In an attempt to create an Islamic religious connection to Jerusalem, Muslims point to Koran and hadith passages referring to Muhammad’s dream (not an actual event) of journeying to heaven on his steed Buraq from “Al Aqsa” — the “farthest mosque.” However, the “farthest mosque” could not possibly have meant Jerusalem because the Koran refers to Palestine as the “nearest” place, and Jerusalem was a central crossroads in the Middle East — not a “farthest” place. Moreover, Jerusalem’s “Al Aqsa Mosque” was built long after the Koran and the Hadith were written. The mosque was named Al Aqsa after the fact, to create a myth about the location of Mohammed’s dream. During Mohammed’s day, Jerusalem was ruled by Byzantine Christians, and a Byzantine Christian church stood on the Temple Mount.

So little did Jerusalem mean to the Muslim Ottomans that, during the First World War, they abandoned it to the British without a fight and even contemplated entirely destroying the city before leaving it.

Significantly, neither the Palestinian Liberation Organization (PLO)’s original National Charter (drafted in 1964, during Jordanian Muslim rule), nor the PLO’s 1968 National Charter, nor the Fatah (Arafat’s terrorist group) Constitution even mention Jerusalem, let alone call for its establishment as a Palestinian Arab capital.

During Jordan’s 19-year illegal occupation of Jerusalem, Jordan also kept its capital in Amman, built Jordan’s first university in Amman, as well as the King’s numerous residences, and made its Friday prayer radio broadcasts from Amman – not from Jerusalem. Arab leaders did not even bother visiting Jerusalem (with the brief exception of King Hussein). Jordan allowed eastern Jerusalem to fall into disrepair — to become a slum, with virtually no water or plumbing or electricity. This is of course not how an Islamic nation would treat a city that was really holy to Islam.

Tellingly, in the not-so-distant past, Muslims recognized the Temple Mount as the site of the biblical Jewish temples. Thus, the Jerusalem Muslim Supreme Council’s publication, ‘A Brief Guide to the Haram Al-Sharif’ (1925 edition, page 4), states about Jerusalem’s Temple Mount: “Its identity with the site of Solomon’s Temple is beyond dispute. This, too, is the spot, according to the universal belief, on which ‘David built there an altar unto the Lord, and offered burnt offerings and peace offerings’.”  (The quotation is from 2 Samuel 24:25.)

The same Muslim publication notes on page 16: “In the west wall of the chamber, a door opens into a staircase descending to Solomon’s stables. This is a vast subterranean chamber. … It dates probably as far back as the construction of Solomon’s Temple. According to Josephus, it was in existence and was used as a place of refuge by the Jews at the time of the conquest of Jerusalem by Titus in the year 70 A.D.” (After 1954, all such references to the biblical Temples were excised from this publication.)

Mideast scholar Prof. Francis Peters of NYU said that Muslims have always regarded Jerusalem “with careless indifference.” There has never even been an important place of Muslim learning built or established there.

However, Leon Uris, famed author of “Exodus” wrote, “Jerusalem has known only two periods of true greatness and these have been separated by 2000 years. Greatness has only happened under Jewish rule … Jews have remained constant in their love throughout the centuries. It is the longest and deepest love affair in the history of the world.”

It’s only by the reunification of Jerusalem under Israeli rule since 1967 that the city has been revitalized, enjoyed stunning growth, and finally enjoys full freedom of religion and access to holy sites for people of every faith. This would be threatened by its re-division, as is already obvious in the massive Christian exodus from Palestinian Arab controlled Gaza and Bethlehem.

Whatever form a final peace deal may one day take, there is no morally just, religiously or factually based, or legally sound reason to dignify the falsified, fabricated Muslim claims to Jerusalem.

This useful recap was originally published by ZOA earlier this year. Clip it now and send to any uninformed friends and colleagues.