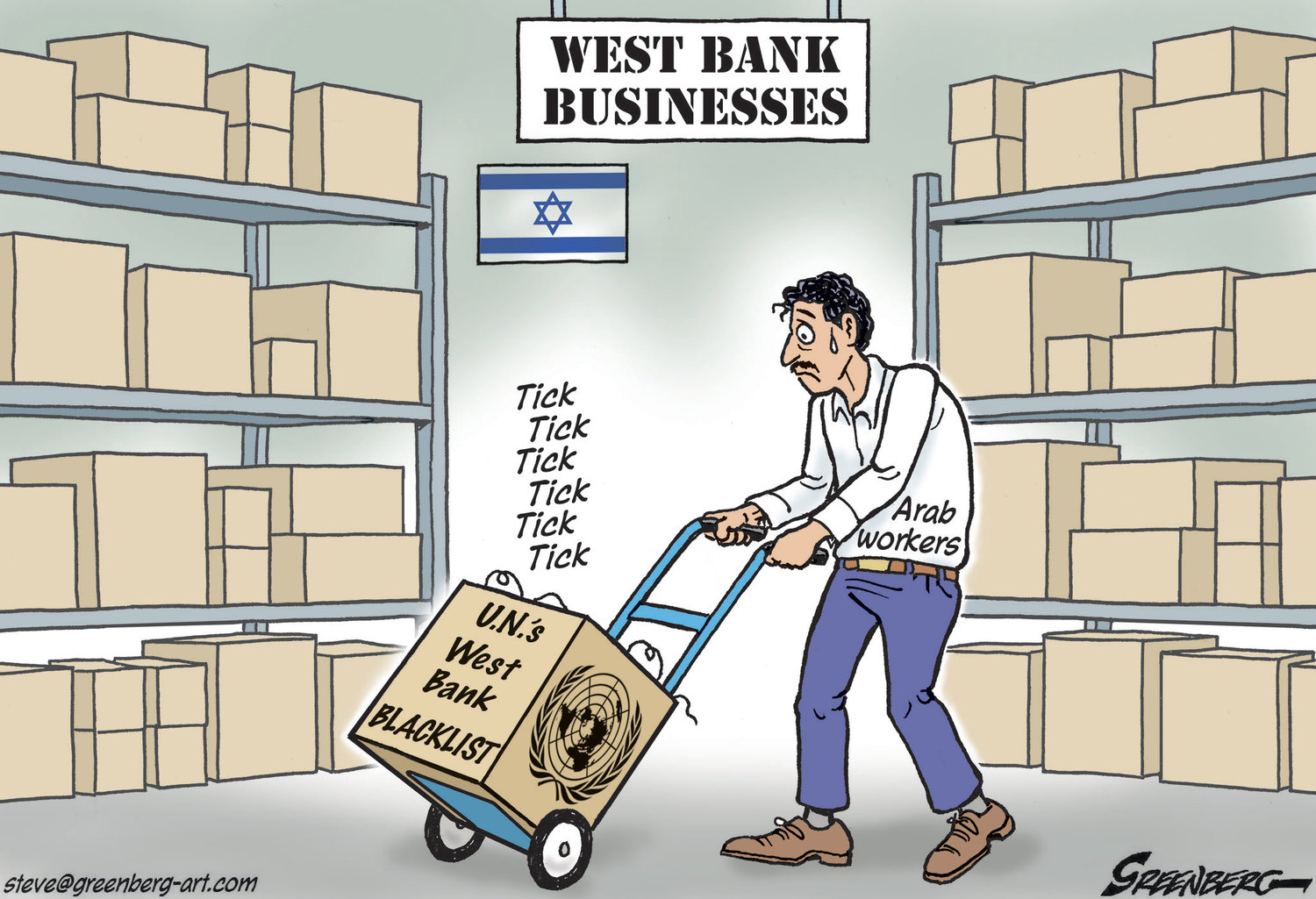 On Feb. 12, the United Nations Human Rights Council (UNHRC) published a blacklist of more than 112 companies operating in Judea and Samaria, which the UN calls “occupied territories.” The blacklist’s publication will aid those engaging in the anti-Semitic Boycott, Divestment, and Sanction movement.

The Office of the High Commissioner for Human Rights Michelle Bachelet said it had identified 112 business entities – 94 are Israeli companies and 18 call other countries, including the United States, Great Britain, France, the Netherlands, Thailand and Luxembourg, home. (As of this writing, there is no word whether or not France agreed to surrender, and turn over the country’s Jews to the UN.)

Among the American companies on the UN’s anti-Semitic naughty list are General Mills (Häagen-Dazs and Lucky Charms) Airbnb (which had been boycotting Judea and Samaria for a while), Expedia, Motorola, and TripAdvisor, among others.

“This list was made in conjunction with pro-BDS and PFLP-linked NGOs,” explained NGO Monitor Legal Adviser Anne Herzberg. “All countries targeted by OHCHR, particularly Israel and the United States, should reassess their relationships with Commissioner Bachelet’s office, including canceling all cooperation and the millions of dollars and euros provided to her each year in funding. The maligned companies should begin assessing plans to take legal action against the UN officials who prepared the list and those who will propagate their false claims.”

Secretary of State Mike Pompeo slammed the release of the list: “I am outraged that High Commissioner for Human Rights Michelle Bachelet published a database of companies operating in Israeli-controlled territories. The United States has long opposed the creation or release of this database, which was mandated by the discredited UN Human Rights Council in 2016. Its publication only confirms the unrelenting anti-Israel bias so prevalent at the United Nations.

“The United States has not provided, and will never provide, any information to the Office of the High Commissioner to support the compilation of these lists and expresses support for US companies referenced. We call upon all UN member states to join us in rejecting this effort, which facilitates the discriminatory boycott, divestment, and sanction (BDS) campaign and delegitimizes Israel. Attempts to isolate Israel run counter to all of our efforts to build conditions conducive to Israeli-Palestinian negotiations that lead to a comprehensive and enduring peace.”

Long Island Republican Rep. Lee Zeldin, who has been a House leader in fighting anti-Semitism and BDS, joined two other members of the House Foreign Affairs committee Michael McCaul (R-TX) and Joe Wilson (R-SC) to slam the UNHRC action.

“The UN’s abrupt and inappropriate release today of a list of companies doing business in the West Bank is yet another anti-Israel stunt that will not further peace in the region,” they said. “The Israeli-Palestinian conflict will not be solved as long as the UN is used as a forum to bash Israel. The purpose of such a list is clear: it is a how-to guide for international boycotts designed to pressure Israel to make concessions outside of direct negotiations with the Palestinians. The United States cannot allow this list to be operationalized to undermine our ally Israel. Congress should pass HR 5595, the bipartisan Israel Anti-Boycott Act, which updates existing US anti-boycott laws to include boycotts fostered by international organizations.”

While publishing this list is a disgusting example of the UN’s hatred of Jews and Israel, sadly, it is not surprising. The UNHRC has a history of anti-Israel actions. During her term at the UN, former US Ambassador Nikky Haley called the UNHRC the United Nation’s “greatest failure” and condemned it as a “cesspool of political bias.” Ambassador Haley was too kind.

The UN Human Rights Council has been biased against Israel since it was created in 2006, replacing the equally anti-Israel United Nations Commission on Human Rights. The UNHRC has passed nearly 80 resolutions condemning the Jewish state, virtually the same number as it has levied against all other countries combined.

An item in the UNHRC’s standing agenda (item 7) requires that Israel’s human rights record be debated at every meeting, something no other nation faces. More than a quarter of the council’s special sessions have focused on Israel.

In March 2016, the council passed a resolution taking the first step toward creating a boycott of Israel. The resolution directed the creation of a database of companies conducting business beyond the 1949 Armistice line, including in East Jerusalem. That resolution was behind the publishing of last week’s “BDS” list.

As Hillel Neuer of UN Watch pointed out, “Doing business in disputed territories has never been prohibited under international law nor, until today, subject to a UN blacklist. For example, the EU has business and financial dealings in Moroccan-occupied Western Sahara and Turkish-occupied Northern Cyprus.”

The International Holocaust Remembrance Alliance (IHRA) definition of anti-Semitism, which President Trump turned into an executive order in December 2019, says in part that applying double standards to Israel by requiring of it a behavior not expected or demanded of any other democratic nation is anti-Semitic. This UNHRC blacklist is a clear example of that anti-Semitic double standard.

Many of the 47 countries presently on the UN’s Human Rights Council are human rights violators themselves. These nations include Angola, Bahrain, Cameroon, the Democratic Republic of the Congo, Eritrea, Indonesia, Libya, Pakistan, Philippines, Qatar, Senegal, Somalia, Sudan, Togo, and Venezuela. The 2016 resolution to create the BDS list was pushed for by some of the worst human rights offenders in the world, including Venezuela, Pakistan, and two countries that are no longer in the UNHRC, Iran, and Cuba.

This BDS list is a new low for the United Nations. But as long as the UN remains dominated by anti-Israel countries, expect it to attempt to go lower.