Wishing on a Koranic verse for Israel’s demise 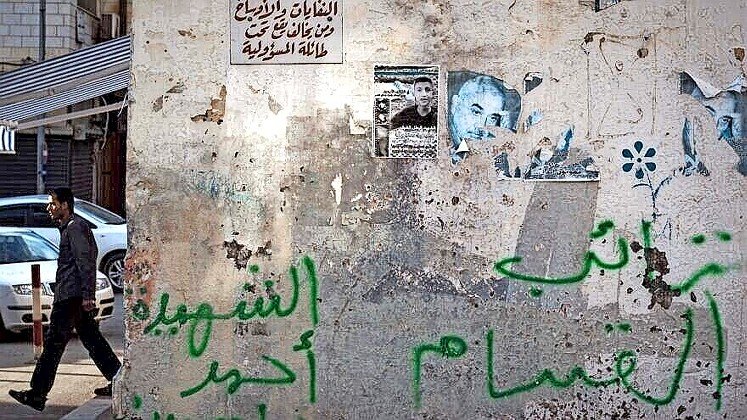 Graffiti displaying Koran verses seen in the center of Nablus in 2016.
Sebi Berens/Flash90

A disparate group of Islamist clerics has been busily predicting that the State of Israel will disappear in 2022, citing the Koran for support. The prediction has been circulating in earnest since March, when Muslims around the world marked the holy month of Ramadan.

According to an article on the pro-Hamas MEMO website by Mohammad Makram Balawi, a Palestinian writer living in Istanbul, the belief that Israel will be removed from the map at some point this year “is widely spread by some Muslim religious scholars, Palestinian and non-Palestinian.”

Balawi mentioned two clerics in this regard. One of them, Sheikh Bassam Jarrar, preaches at a mosque on the outskirts of Ramallah in the West Bank. The sheikh is apparently “97 percent” certain that Israel will vanish in 2022 due to calculations based on an ancient numerical system that assigns number values to the 28 letters of the Arabic alphabet.

Of course, March 5 has been and gone, and Israel is still there.

As for the second cleric discussed by Balawi, Iraqi Sheikh Mohammed Ahmed Al-Rashed, he provided little that would bolster Jarrar’s claims. Among Al-Rashed’s reasons for Israel’s imminent collapse is a story about a Jewish neighbor of his in Baghdad in 1948, the year of Israel’s creation, when he was just a child. The woman, who was said to be “wailing” at the time, told Al-Rashed’s mother “that Jews had declared a state in Palestine, and there is a Jewish prophecy that stated that if Jews established a state, it would be a sign of their destruction and would not last more than 76 years.”

Islam is not the only faith to dress up superstition as credible assertion. Still, the significance of such beliefs is better gauged by measuring their popularity rather than debating their contents. Among Palestinians, the belief that Israel’s disappearance will be a feature of 2022 is not uncommon.

We know this because a survey conducted last week by the Ramallah-based Palestinian Center for Policy and Survey Research (PSR) included a question about the prediction. One in four Palestinians is certain that the prediction will come to pass, while 63 percent believe otherwise. Most tellingly, according to the PSR, a “vast majority” of 78 percent believe that the Koran contains such a prophecy, while only 17 percent do not.

This particular response needs to be seen within the context of the entire poll. The view of a clear majority that Israel’s demise is religiously sanctioned, along with the view of a notable minority that such an event is expected as soon as this year, would probably not have registered were the Palestinians engaged in a meaningful peace process with Israel that provided both sides with some grounds for hope.

The opposite is the case. The overall picture of Palestinian society that emerges from the PSR poll is an alarming blend of cynicism and extremism.

The biggest loser in the poll is the Palestinian Authority head Mahmoud Abbas, whose personal ratings have been at rock bottom for several years now, as he clings to the post he first won in 2005. If an election was held tomorrow, Abbas would garner 33 percent of the vote, with 55 percent opting for his Hamas rival Ismail Haniyeh, but the kicker is that only 49 percent of those eligible to cast a ballot would bother turning up. The Palestinians, the poll demonstrates, are fed up with their leaders and with their existing political factions.

That should not come as a surprise, given the systemic corruption and political repression that has marked Fatah rule in the West Bank and Hamas rule in the Gaza Strip. Still, any hope that this disillusionment might generate a movement for a historic reconciliation with Israel is sorely misplaced.

Just 28 percent of Palestinians currently agree with the two-state solution — about the same as those who believe in the Koranic prediction of Israel’s coming demise — while a whopping 69 percent oppose it. In a similar vein, an overwhelming majority (77 percent) doesn’t think there is a ghost of a chance that a Palestinian state will be created alongside Israel within the next five years.

Separately, 55 percent of respondents urged a return to armed confrontation with Israel, although support for violence is far more pronounced among Gazans (77 percent) than West Bankers (46 percent). Asked what the immediate priority for the Palestinians should be, a plurality of 46 percent answered in favor of creating a state with eastern Jerusalem as its capital. However, another 32 percent expressed their backing for the scorched-earth approach to the conflict in the form of a full return of more than 5 million descendants of the original 750,000 Arab refugees of Israel’s 1948 War of Independence.

There is little indication that these attitudes will shift in the near future, deepening Palestinian frustration with the international community even further. Their views on the Russian invasion of Ukraine — a plurality of 42 percent are sympathetic to Moscow — suggest that the Palestinians see their interests as aligned with adversaries of Western democracy, as was the case during the Cold War.

When it comes to the issue that has bedeviled peace efforts for nearly a century — whether the Palestinians can acknowledge and accept that Israel’s existence is legitimate — the world is as far away from a positive resolution as it has ever been.

While it is correct that a minority of Palestinians think that the Koranic prediction of Israel’s collapse is accurate, a much greater number clearly wishes the prediction was true, even if their reasoned judgment leads them to a different conclusion. In such an environment, defined by Palestinian incitement against Israel’s very presence, the swords won’t become ploughshares anytime soon.