Where Har Habyit fits in Jewish and Israeli law 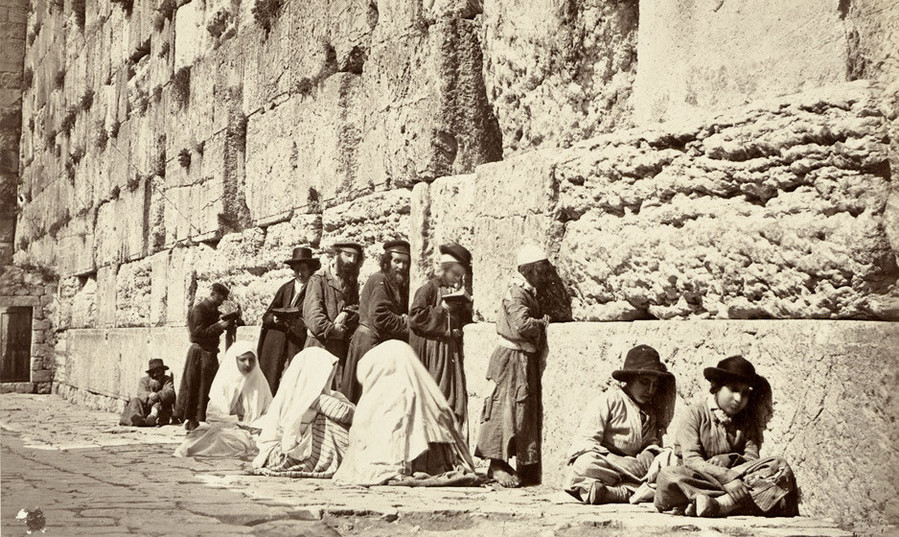 Jews pray at the Kotel, adjacent to the Temple Mount, circa 1880.
Commentary by Rabbis Natan Tzvi Brinn and Yehuda Levi, and Dr. Milissa Jane Kronfeld

Rabbi Avi Shafran, director of public affairs for Agudath Israel of America, recently wrote in Religious News Service that according to “Israeli law, non-Muslims may go up to the Temple Mount to visit, but not to pray or conduct rites,” and also that there are “complex” “religious reasons” for prohibiting prayer on the Mount.

There is no such law. The Israeli Supreme Court does allow the Israel Police to limit freedom to worship on Har Habayit if it might cause a “disturbance of public order” but, in practice, Jews are free to pray quietly and use a prayer book on their smartphones.

As for the “religious reasons,” Rabbi Shafran claims that “to enter such a holy place, Jewish law requires any Jewish man or woman who has had contact with or been under the same roof as a deceased person to undergo a purification ritual that involves, among other things, a perfectly red heifer that has never been worked in any way.”

This is inaccurate. Most of the Temple Mount complex does indeed have a purification procedure that is required before entry, but it is not the procedure that requires the ashes of the red heifer.

This is because there are two separate areas on the Mount. The more stringent procedure is required for the holiest area — the Shechina Camp, which is slightly less than 15% of the site. The less onerous purification is required for the Levitical Camp, which is the remaining 85%. This procedure requires only immersion in a ritual bath. These laws are universally accepted and clearly laid out in Maimonides’s Mishneh Torah.

Jewish visits to the Mount are “a provocation without a justification” and “a gift to Muslim extremists the world over who loathe Israel and search for anything they can portray as insulting,” according to Rabbi Shafran.

Where and who are these extremists? The highly regarded Muslim activist Noor Dhari, for example, supports Jewish prayer on the Mount and has stated that opposition to it is a political stance exclusive to eastern Jerusalem, Gaza and Jordan, rather than Islam itself.

Rabbi Shafran also decries “another provocation” — the removal of a controversial sign at the gate of the Temple Mount, placed by Israel’s Chief Rabbinate, that warns Jews against ascension.

This sign was removed by an unknown party last summer. While an identical sign was installed last month, it is one of two signs. The second sign states that entrance to the Temple Mount is permitted after ritual immersion. This sign has existed for years, is still there at this time and no one has ever tried to remove it.

What is most troubling about Rabbi Shafran’s article is his use of the word “provocation.” We cannot comprehend how a Jew who wishes to ascend the Temple Mount in holiness and purity after ritual immersion; is careful to walk exclusively on the 85% outer area of the Mount; and while on the Mount bows down before his Creator in a manner and in a place where not a single Muslim can see him, could be labeled a provocateur.

The Talmud refers to prayer as “the service of the heart,” but to pray on the Temple Mount is more than just service. Five commandments are fulfilled by it.

•As Ramban explains, the first of these commandments is to seek His presence, “Only on the site that G-d your L-rd will choose from among all your tribes as a place established in His name.” (Devarim 12:5).

•Second, as Rambam explains, to serve Him. As the verse says, “The Lord your G-d you shall fear Him and you shall serve him” (Devarim 6:13).

•Third, as the Torah states, “You shall observe My Sabbaths and revere My Sanctuary” (Vayikra 19:30). This, as the Sages stated, implies, “Just as we are to keep the Sabbath forever, so are we to revere the Temple forever” (Yevamot 6b).

•Fourth, as the Torah demands, “lo tekhonem” (Devarim 7:2), which is interpreted to mean, “do not give them a foothold in the land” (Avoda Zara 20a). As Rabbi Shlomo Goren noted, “Our halachic authorities established that loss of sovereignty is like destruction. It turns out that when the government forbids Jews from going up freely it is redestroying our Temple.”

•Fifth, as Rambam writes, “We should not leave it in the hands of the nations, or desolate,” for the verse says, “inhabit the land” (Bamidbar 33:53). As Rabbi Elisha Wolfson elucidates, “When we go up to the Temple Mount, we merit to fulfill the positive commandment of settling the land.”

Rabbi Shafran quotes from the prophet Isaiah, “a wolf and a lamb shall graze together,” indicating that he longs for this day and stating that it can be achieved through simple prayer “at the Western Wall and in synagogues and homes across the planet.”

We who ascend the Temple Mount also long for this day. But we understand that this verse is dependent on another verse, from the same chapter, which states:

“But you … that forget My holy mountain, that prepare a table for Fortune … I will destine you to the sword, and you shall all bow down to the slaughter; because when I called, you did not answer.”

This stirring prophecy must not be fulfilled again. As such, we understand that our longing for that ultimate day of peace can only be fulfilled by not being those people who “forget My holy mountain.”

We humbly remind Rabbi Shafran, as stated in the Mishna, “Scholars, be careful with your words, lest … the Name of Heaven will be desecrated.”

The authors live in Israel.