What Qatar learned from the Hitler Olympics 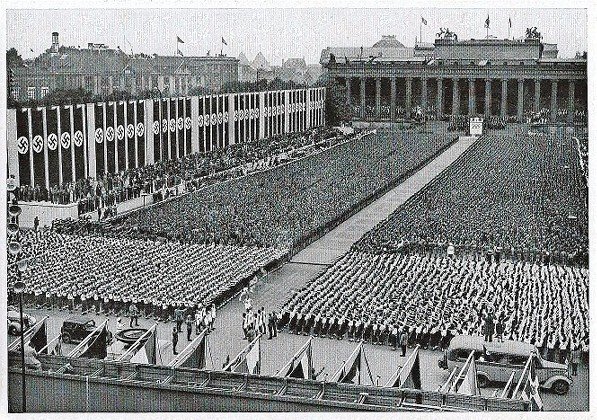 The Jewish community in the United Arab Emirates opens Rimon, the first-ever kosher supermarket in the Gulf.
By Rafael Medoff

The government of Qatar reportedly has been pressuring Hamas — which it finances — to refrain from launching rockets into Israel during the World Cup soccer matches presently underway in the Gulf state. Sound familiar?

The use of temporary deceit as a political weapon has a long and ignoble history. It originated with Grigory Alexandrovich Potemkin, a Russian cabinet minister who is said to have built fake villages — or deceptively redecorated existing ones — along the route traveled by Czarina Catherine II, during her visit to Crimea in 1787. As a result, Potemkin’s name has come to be associated with this particular kind of deceit.

Soviet dictator Josef Stalin was a master at this game. In the 1920s and 1930s, Western visitors to the USSR were taken to see “Bolshevo,” which was presented as an example of a “progressive” Soviet prison that needed no walls or guards, because criminals were educated and inspired to become productive citizens.

The Nobel laureate author George Bernard Shaw, duped by this fiction, claimed the only problem in dealing with a Bolshevo prisoner was “inducing him to come out at all” when his jail term concluded. In reality, Bolshevo had been created to impress foreigners. It was populated largely by informers whose reward was to live in the fake prison. Thus the slave labor camps of the Soviet gulag remained hidden from foreign eyes.

During the Holocaust, the Nazis used Potemkin-style deception to help camouflage the mass murder of the Jews. In June 1944, Hitler invited a delegation from the International Red Cross to visit Theresienstadt (Terezin), the Jewish ghetto that had created in Czechoslovakia as a transit point for Jews being shipped to the gas chambers of Auschwitz. But the Nazis told the Red Cross that the camp was an “Endlager,” a final destination where Jewish prisoners lived happily.

In “he Terezin Diary of Gonda Redlich” (edited by the late Prof. Saul S. Friedman), a Theresienstadt inmate described the Nazis’ preparations for the Red Cross visit: “They rain down order after order. Kindergarten children are to sing during the visit, the workers are to return home. Plays and cultural events and sporting activities must take place. Even the few lambs left here roam about on the grass around the city. The children, the workers, the sheep — a perfect idyll.”

Another prisoner recalled: “A playground was laid out with sandboxes and swings, a ‘children’s pavilion’ was built and painted from inside with big wooden animals as toys. Behind a glass veranda you could see a dozen cribs. It was like a story book — but children were only allowed to enter this little paradise on the day the commission visited Theresienstadt.”

Houses were freshly painted—but only the portions that would be visible to the Red Cross inspectors. The visitors’ final report to Red Cross headquarters characterized conditions in the camp as “relatively good.” Nobody seemed to wonder why the population of Theresienstadt at the time of the visit was 30,000 less than what the Red Cross knew it had been just a few weeks earlier.

In the 1950s, the North Korean regime built a village called Kijong-dong in the demilitarized zone separating North Korea from South Korea. The North Koreans called it a “peace village” that supposedly was inhabited by two hundred families, but to this day Kjong-dong actually has no civilian residents; it houses soldiers, artillery and underground bunkers.

A Washington Post correspondent who visited the area in 1998 reported that “if you squint through your binoculars, you’ll see that the buildings [in Kjong-dong] don’t even have glass in the windows. It’s a lie, a huge Potemkin village.” The sidewalks are empty; automatic timers turn lights on and off in the buildings in order to create the illusion that people live there.

Perhaps the closest historical analogy to Qatar and its soccer matches was the Berlin Olympics of 1936. For Hitler, the Olympics were an opportunity to make the Nazi regime seem reasonable and distract from his oppression of German Jews. The antisemitic newspaper Der Sturmer was briefly removed from newsstands and “Jews Not Wanted” signs that had been posted along major thoroughfares were taken down. Once the games were over, the signs and the newspapers returned.

Likewise, the Olympics hosted by China earlier this year gave the ruling regime a chance to turn the world’s attention away from what the has said is China’s genocidal persecution of its largely-Muslim Uyghur minority. In advance of the games, according to the Washington Post, the Beijing government even temporarily closed some of the notorious “re-education centers” where an estimated one million Ugyhurs have been interned. By now those centers undoubtedly have been reopened.

We can expect the same thing from Qatar and Hamas. The Qatari government, which is the world’s largest financial supporter of Hamas, evidently has no problem with the firing of rockets from Gaza into Israeli nursery schools. The problem is merely a matter of timing. When the World Cup matches are over, the rocket attacks from Gaza undoubtedly will resume. Qatar has learned from Hitler, and too many other historical precedents, that the Free World is easily fooled.