What constitutes ‘last resort’ as time runs out 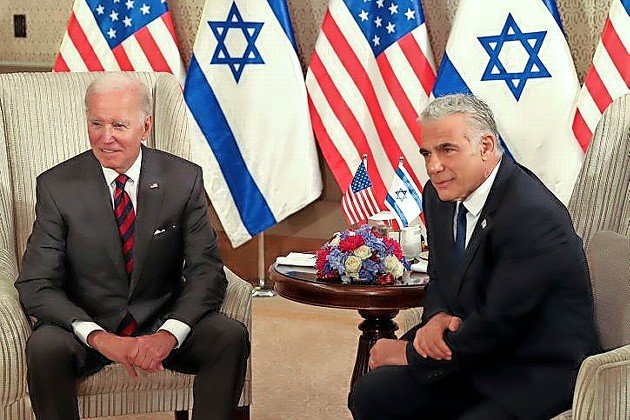 The sand has already filled the bottom of the hourglass.”
By Ruthie Blum

In an interview last week at the White House with Israeli Channel 12’s Yonit Levi, President Joe Biden reiterated his administration’s desire to return to the Joint Comprehensive Plan of Action (JCPOA), the 2015 nuclear deal with Iran.

“The only thing worse than the Iran that exists now is an Iran with nuclear weapons,” he said during the one-on-one chat that was taped on the eve of his trip to the Middle East and broadcast in Israel after his arrival in the country. “And if we can return to the deal and hold them tight…”

He never finished that sentence. Instead, he proceeded to criticize President Trump, without mentioning him by name.

“I think it was a gigantic mistake for the last president to get out of the deal,” he said. “[The Iranians are] closer to a nuclear weapon now than they were before.”

Raising the issue of the Islamic Revolutionary Guard Corps, which Iran demanded be removed from the State Department’s list of Foreign Terrorist Organizations, he insisted: “It doesn’t have anything to do with whether or not the Quds Force is going to stop, going to continue to be engaged. We can act against that and still have a deal where they curtail their nuclear program. And so, I still think it makes sense. We’ve laid out on the table; we’ve made the deal; we’ve offered it. … It’s up to Iran now.”

None of this was particularly earth-shattering. Biden, who served as former President Barack Obama’s second-in-command, never changed his mind about the JCPOA. This is probably why his following statement made such a stir.

When asked by Levi whether his assertion that he will do everything to prevent Iran from acquiring nuclear weapons includes the use of force, he replied: “If that was the last resort, yes.”

That this statement from the leader of the free world provided fodder for front-page headlines is in itself worrisome. It should be a given that stopping the ayatollahs from producing weapons of mass destruction could — and will — require military intervention.

Nevertheless, Israeli Prime Minister Yair Lapid was heartened by these words. He was even more buoyed by the “Jerusalem US-Israel Strategic Partnership Joint Declaration” that he and Biden signed on Thursday.

The passage of the document relating to the Islamic Republic reads: “The United States stresses … the commitment never to allow Iran to acquire a nuclear weapon, and that it is prepared to use all elements of its national power to ensure that outcome.”

All well and good, except for what’s missing: a deadline for Biden’s patience. This renders his “last resort” comment meaningless.

Meanwhile, the clock is ticking, possibly past the point of no return. If the regime in Tehran is to be believed, the sand has already filled the bottom of the hourglass.

“In a few days we were able to enrich uranium up to 60 percent, and we can easily produce 90 percent enriched uranium,” Kamal Kharrazi announced. “Iran has the technical means to produce a nuclear bomb, but there has been no decision by Iran to build one.”

It’s a threat worth taking seriously. Even America’s diplomacy-obsessed Special Envoy for Iran Robert Malley, who called the latest indirect talks with Tehran “more than a little bit of a wasted occasion,” claimed that it is only “a matter of weeks” before Tehran has enough enriched uranium for a nuclear weapon.

That was two weeks ago. What, then, is Washington waiting for? What in Biden’s mind constitutes a “last resort” — a missile with a nuclear warhead launched at Tel Aviv?