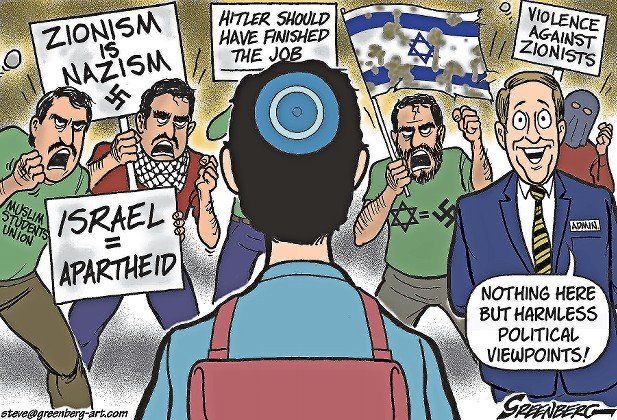 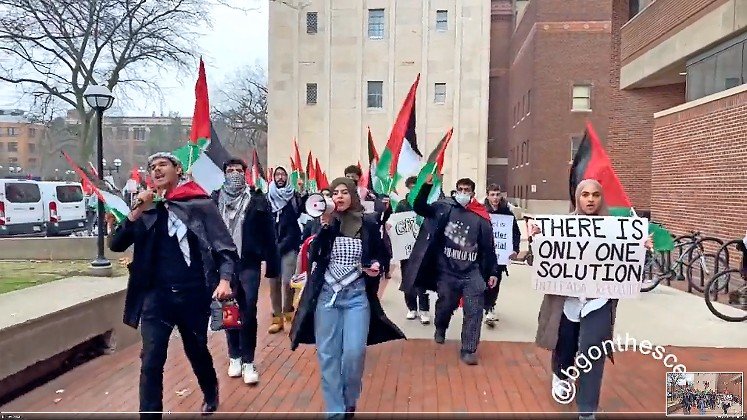 Marchers parading with Palestinian flags at the University of Michigan in Ann Arbor call for a Jew-killing intifada that would judenrein the land of Israel “from the river to the sea.”
Previous Next

The Nazis murdered six million Jews in their blitzkrieg toward a “Final Solution.” Last week, students at the University of Michigan advanced their own “Solution”: an “intifada” leading to the demise of Israel and the death of Jews.

Scenes from the Palestinian-driven anti-Israel protest on the Ann Arbor campus shook social media. Mainstream media, except for some conservative outlets, largely ignored it.

Video of the protest showed marchers yelling “Intifada, Intifada! Long live the Intifada,” a call for the violent overthrow of the Jewish state inspired by deadly Palestinian riots in the late 1980s, early 1990s, and early 2000s.

As a marcher chanted “There is only one solution!” the crowd behind her responded, “Intifada! Revolution!

Marchers, screaming into bullhorns and waving Palestinian flags, chanted the infamous cry to judenrein the land of Israel: “From the river to the sea, Palestine will be free!”

Another video depicted the marchers chanting, “Not another nickel, not another dime, no more money for Israel’s crimes.”

The anti-Jewish march was held to protest an appearance on campus by Vice President Kamala Harris. She spoke there about climate policy, environmental justice and student activism.

“Kamala, Kamala, you can’t hide, you’re committing genocide,” the protestors chanted outside the auditorium where the vice president was speaking.

The unvarnished call to overthrow Israel drew reactions on Twitter.

Popular conservative account AG tweeted, “I don’t think most people truly comprehend the level of hate and hostility for Jewish students in several of the top liberal Universities because the school administrations tend to support/enable this stuff.”

Hollywood producer and The Spectator columnist Daniella Greenbaum Davis empathized with the Jewish students at University of Michigan. She tweeted, “The first and second intifada saw terrorists brutally murder innocent civilians. Can’t even imagine being a Jew on Michigan’s campus right now.”

“At the University of Michigan, a call to murder Jews,” tweeted Jewish Journal columnist Blake Flayton.

“Terrifying. Echoes of what happened in Charlottesville, except the violent anti-Semites are cut from a different cloth,” wrote Boris Ryvkin, former national security adviser to Sen. Ted Cruz. “I expect major media to give this the saturated, wall-to-wall coverage it gave that event with the WH, Democratic leaders and the Squad members condemning it.”

Very little about this rally was published in mainstream media.