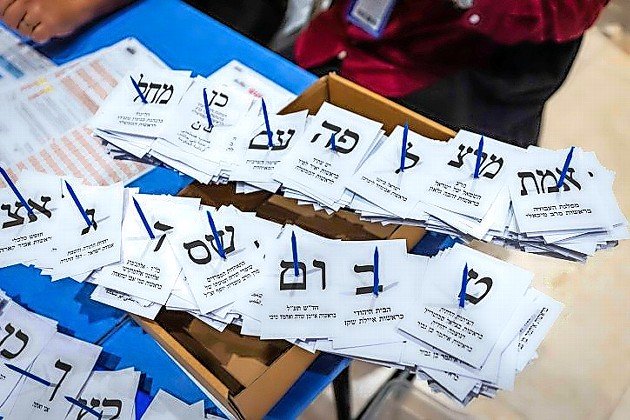 Central Election Committee workers count the remaining ballots at the Israeli parliament in Jerusalem, after the general elections, on November 3, 2022. Photo by Olivier Fitoussi/Flash90
Olivier Fitoussi

If Americans shared the Israeli daily experience they might better understand why Israelis elected a right-wing government.”
By James Sinkinson

Americans — especially American Jews — have expressed dismay at the results of last week’s Israeli elections. They seem to believe that Israel has been transformed suddenly from a thriving democracy into a “semi-fascist” state.

Yet Americans distraught at the results of last week’s Israeli elections are at a profound disadvantage: They don’t live in the Jewish state. Many Americans can’t understand why Israelis voted for the parties they did … or hysterically misinterpret the implications for Israel’s democracy.

If Americans actually shared the Israeli daily experience, they might better understand why Israeli voters — in a record turnout — overwhelmingly elected Netanyahu’s rightist Likud Party and several further-right parties predicted to govern with him.

While I did not vote for any of the parties in the presumed winning coalition, I understand and sympathize with the many who did. Nor am I in the least worried about Israel’s political health.

•Two Palestinian terrorists armed with a knife and an ax attacked seven religious Jews in Elad  — three men, fathers all, died in the bloody attack. (Police captured the killers, with their ax, a week later.)

•At a light-rail station in Jerusalem, a Palestinian terrorist stabbed a 20-year-old man. The attacker was killed.

•A Palestinian driver intentionally runs over five Israeli soldiers waiting at a bus stop. A bystander fatally shoots the terrorist.

•September sees a record of more than 200 terrorist attacks against Jewish residents of Judea and Samaria.

•A Hamas official vows that the Palestinians will “return” the entire land of Israel to its “original” owners.

It’s no wonder voting Israelis in general are in the mood for more law and order. But Americans should appreciate another background factor in the Israeli elections. Unlike in the United States, where the left and the right battle each other bitterly in a 50-50 tug-of-war, in Israel, the right has come to dominate the playing field.

Why have Israeli Jews come to take a harder line on Palestinian violence than American Jews? Because those Palestinian attacks are just two or 10 or 20 miles from their front doors.

Why do the majority of Israeli Jews scoff at the illusory two-state solution, while their American counterparts continue to nurture the idea? Because Israelis see and hear every day the consistent, decades-long refusal of Palestinians to make peace … or even speak of peace.

Finally, why do most Israelis accept without question the right of Jews to create communities in Judea and Samaria?

But what of Israel’s democracy? Why has Israel had five elections in the last four years? Why does it have such a big problem electing a stable, right-wing government?

The reason Israeli governments have been so shaky and tentative, even seating a blended left-center-right-Arab coalition after the previous election, is because many on the Israeli right so disdain Netanyahu politically that they will never support him. They may share his values, but they distrust the man.

The question now is whether Israel will experience and survive the political implosion predicted by leftist American politicians and media as well as by a good number of leftist Israelis.

To answer, first consider this fact: Israel is ranked the twenty-third most successful democracy on earth — scoring higher even than the United States. Its electoral process is secure and inclusive; its government functions reliably; its political culture is vibrant; it aggressively protects civil liberties; and it has a high degree of citizen participation — which in last week’s election was over 71 percent, much higher than the normal US turnout.

Give this robust strength, it’s a real show of chutzpah for American leftists to be doomsaying Israel’s democracy. One is tempted to believe that this prediction is more based on political distaste for Israeli rightist values than hard analysis.

What’s more, the ultra-right Religious Zionist Party — now Israel’s third largest — whose hard-line positions on immigration, terrorism and judicial reform so offend the leftists, has no planks in its platform that oppose the structure of Israel’s democracy.

Much criticism against Religious Zionists attributes to them positions not in their platform, but which critics claim are hidden by “spin” and “ambiguity.”

Just as the US Congress accommodates radical legislators like Bernie Sanders, Elizabeth Warren, Rashida Tlaib and Alexandria Ocasio-Cortez, who advocate extreme socialist schemes and anti-Zionist measures, so should Israel be allowed its fringe elements.

We can have confidence in both the American and Israeli systems to temper — and even quash when necessary — measures and people who seek to overturn the protections firmly embedded in our democratic systems.