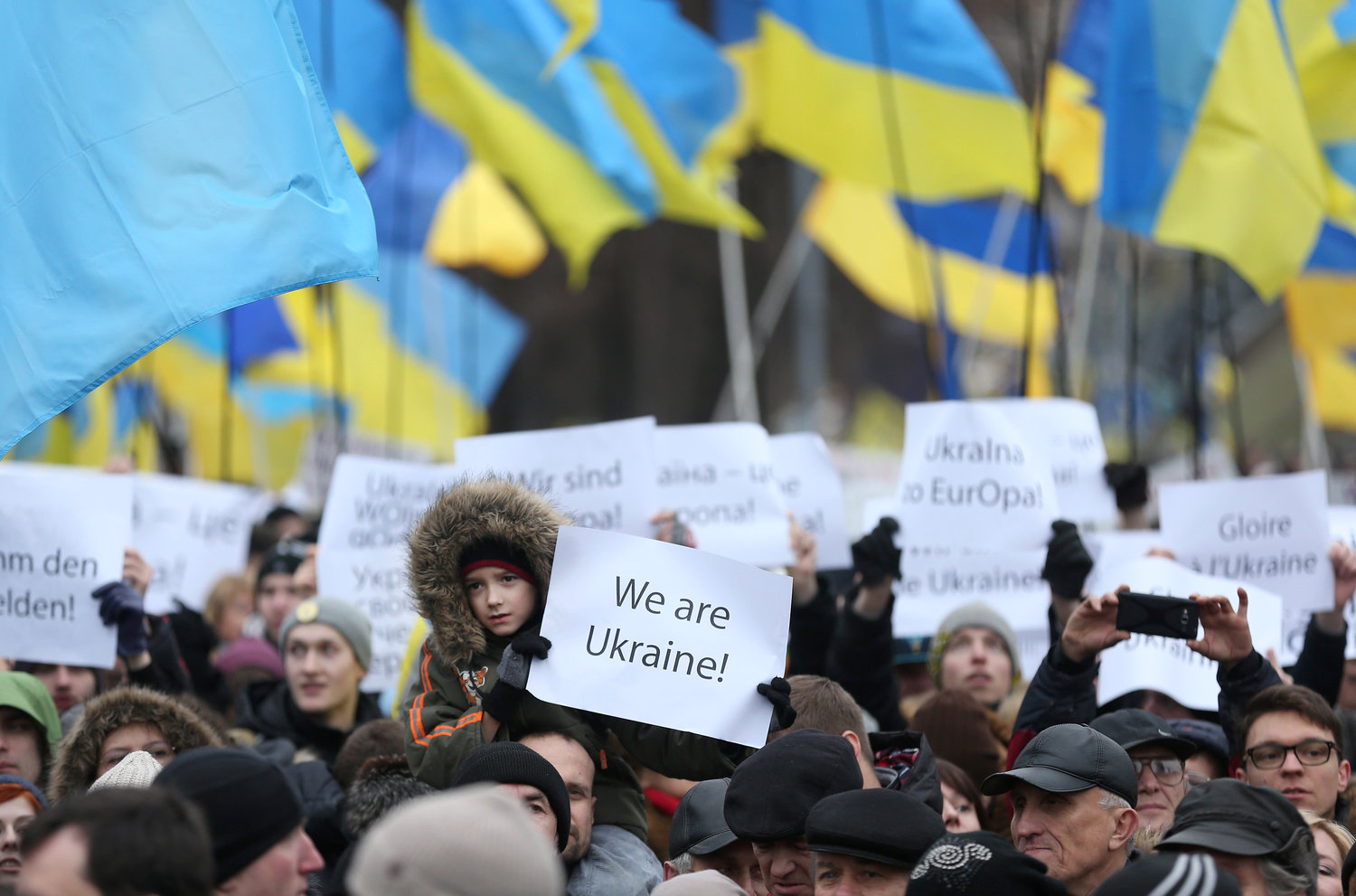 Participants in the March of Dignity gather in Kiev’s Maidan Independence Square for ceremonies marking the first anniversary of the Maidan Revolution that led to the ouster of Ukrainian President Viktor Yanukovic, on Feb. 22, 2015.
Sean Gallup/Getty Images 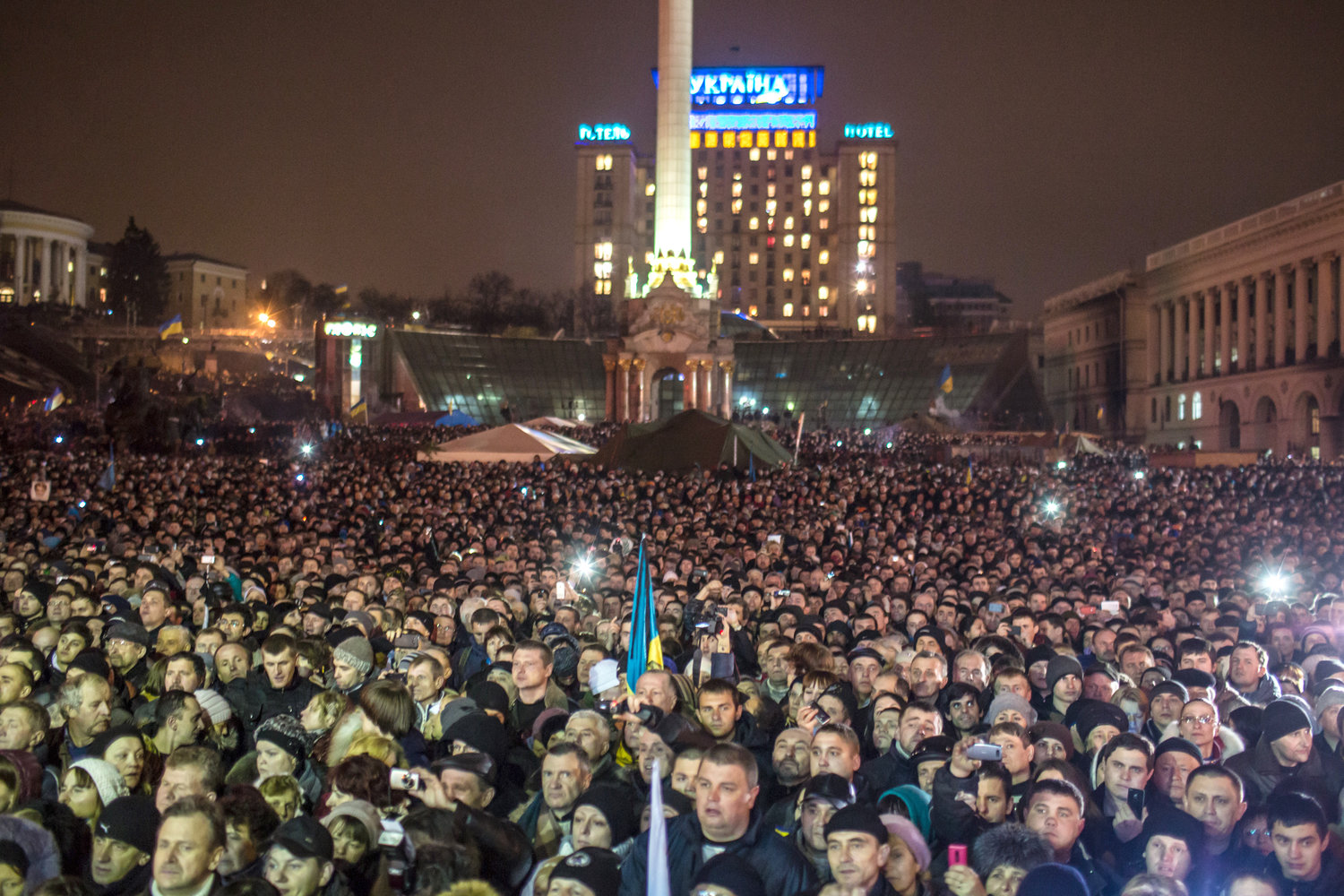 See also: Who are the Jews of the Ukraine?

A member of Kiev’s large Jewish population and a longtime activist for its causes, Dolinsky had hoped that the bloody street fights of the Maidan Revolution would free his country of its rampant corruption and dependency on Russia – two of the main issues that sparked the unrest.

Despite sorrow for the lives lost and damage sustained in the fight between protesters and police, Dolinsky, 49, was proud of the unity and dignity on display at Maidan.

That square was gave its name to a revolution in which students braved live ammunition and police savagery in the winter of 2014. Its potholed sidewalks — protesters had pried out the tiles to hurl at police — hosted a barricaded tent city full of music, self-sacrifice and vindication when the fight finally ended with the overthrow of President Viktor Yanukovych that year.

But at the height of the euphoria, Dolinsky spotted a portending sign.

“From day one, they were celebrating Stepan Bandera, and it surprised me,” Dolinsky, who runs the Ukrainian Jewish Committee group, recalled Monday. Bandera was one of numerous Ukrainian collaborators with Nazi Germans, including SS volunteers and mass murderers of Jews and Poles, who are now celebrated as anti-communist heroes in Ukraine and by its government.

The glorification of Bandera at Maidan marked the beginning of a trend. Streets have been named in this city for Bandera and other collaborators. In 2015, a law passed making it illegal to insult the memory of any anti-Soviet fighter declared a national hero, including war criminals.

In Lviv last year, hundreds of men marched wearing the SS uniforms of Ukrainian collaborators in a city-approved event. At least three Ukrainian municipalities in recent years have unveiled statues for Bandera’s deputy, Yaroslav Stetsko, who during the Holocaust openly called for “the extermination of the Jews.”

Coinciding with a “resurgence of virulent anti-Semitism in Ukraine,” as the Simon Wiesenthal Center defines it, the glorification of Jew killers has divided Ukrainian citizenry and its Jews and exposed the country to unprecedented criticism abroad. It has made many locals, including Dolinsky, uncomfortable in their native country.

“It has become a problem not only for Ukrainian Jews but for the society this issue polarizes,” said Tzvi Arieli, a 39-year-old Jewish translator and father of two from Kiev, who fought during the revolution against police.

Arieli saw his income halved following the revolution, which triggered a territorial conflict between Russia and Ukraine, a country with more landmass than California and a population of 45 million.

Amid fighting in secessionist provinces held by Russian-backed rebels, the Ukrainian currency, the hryvnia, has lost two-thirds of its value against the dollar.

Still, Arieli said Ukraine is better off than before the revolution “because it put the country on a path, not an easy path, toward true independence and lower corruption.”

On the revolution’s fifth anniversary, though, some Ukrainian Jews are feeling cautiously optimistic again following yet another change in leadership: Vlodymyr Zelensky, a Jewish actor, won a landslide victory in an election last month against the post-revolution president, Petro Poroshenko, whose critics say pandered to nationalists and failed to uproot corruption.

A self-deprecating comedian who has spoken critically of the celebration of Nazis, Zelensky is giving local Jews and liberals hope for change in a society that is more sharply divided than ever by language, ethnicity, religion, ideology and socioeconomic gaps.

The fact that Zelensky’s Jewish origins, on which he spoke openly during the campaign, played no major role in the elections was held up as evidence of Ukraine’s immunity to anti-Semitism during the Kyiv Jewish Forum last week.

A two-day event devoted to discussing various aspects of Ukrainian Jewry, the conference was a rare show of unity by a fractious community deeply divided on many issues, including on how to respond to the glorification of Nazis.

“How many of us would have thought that Ukraine would become the least anti-Semitic country in Europe?” asked Boris Lozhkin, president of the Jewish Confederation of Ukraine, the group that hosted the event.

Prime Minister Vlodymyr Groysman is Jewish too, making Ukraine the only country in the world except Israel where both positions are occupied by Jews.

“It shows that Ukraine is on the right path,” said Yaakov Dov Bleich, a chief rabbi of Ukraine.

Meylakh Shoychet, the Ukraine director for the Union of Councils for Jews in the Former Soviet Union, is less certain.

“Zelensky hasn’t said anything concrete on how he gets this country’s economy moving forward,” said Shoychet. “He’s inexperienced and I think that there’s a good chance he will fail.”

If that happens, Shoychet said, it could unleash anti-Semitism because Zelensky is Jewish.

But to Elan Carr, the U.S. special envoy to monitor and combat anti-Semitism, the “absence of anti-Semitic rhetoric during the campaign is a miracle, a stunning fact that shows how far Ukraine has come,” he said during the conference.

Lena Liebiedieva, a 42-year-old Jewish mother of one from Kiev who works for an international airline, said she feared that Zelensky’s vagueness veils a willingness to put Ukraine back in Russia’s sphere of influence. That, she said, “would be a return on everything that was achieved at Maidan.”

Before Maidan, Liebiedieva said, she did not trust the courts and police.

“Now I feel confident about the judiciary, that it won’t take money, and I think of the police as working to protect me,” she said.

Liebiedieva said she feels safe as a Jew in Kiev and that the issue of glorifying Nazis “is about the past, in the past, not a part of everyday life that affects me in any way.”

There is no consensus, though, on whether Ukraine actually has made any great strides in the fight against anti-Semitism.

Last year, Israel’s government singled out Ukraine as a regional trouble spot in its annual report for 2017 on anti-Semitism.

“A striking exception in the trend of decrease in anti-Semitic incidents in Eastern Europe was Ukraine,” the report said, adding that the approximately 130 anti-Semitic attacks recorded there in 2017 was double from 2016 and surpassed the tally for all the incidents reported throughout the entire former Soviet Union.

Also, in 2018, more than 50 members of the U.S. Congress condemned Ukrainian legislation that they said “glorifies Nazi collaborators.” It is “particularly troubling that much of the Nazi glorification in Ukraine is government-supported,” they wrote.

One leader of Ukrainian Jewry, Josef Zissels of the Vaad group, dismissed the report as amateurish and suggested the Congress members’ letter was the result of Russian lobbying. Zissels’ comments drew ire from counterparts across the Russian-speaking world.

Some see a link between the glorification of Nazis and Ukraine’s anti-Semitism problem.

“When the government says it was basically all right to kill Jews a few decades ago, it’s not surprising that some people assume it’s OK to target them now,” Dolinsky said.

The bleak reading of reality by Dolinsky and others is in stark contrast to the hopeful analyses of other observers, including Yale historian Timothy Snyder.

“Ukraine looks much, much better today than before Maidan,” he told the Jewish Telegraphic Agency in January. “In the intervening five years, good things have happened, just not enough of them,” with problems in the rule of law being the country’s main problem.

“As to whether the revolution has produced more anti-Semitism, I think the answer to that is clearly no,” Snyder said, adding that the phenomenon there is “basically within European norms, I would say.”