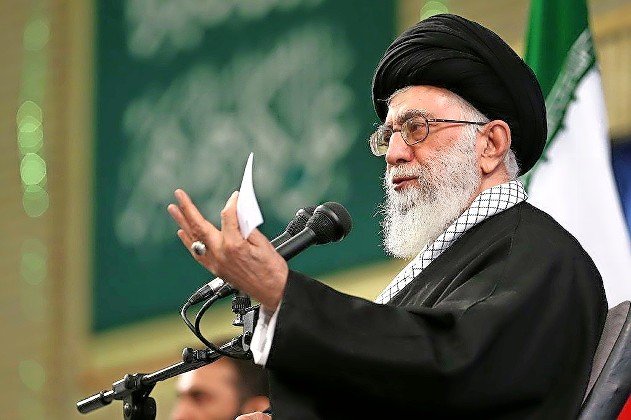 Iran’s Grand Ayatollah Ali Khamenei, pictured in 2016, tweeted in 2019 that the 1989 fatwa “is based on divine verses and just like divine verses it is solid and irrevocable.”
WikiCommons

Twitter censors speech that provokes dissenting thought but allows that which incites violence.”
By David Suissa

Twitter must be the epitome of hypocrisy. It bans the New York Post’s reporting of Hunter Biden’s laptop, and columnist Paul Sperry’s recent take on the FBI’s raid on Mar-a-Lago, but allowed this 2019 tweet by Grand Ayatollah Ali Khamenei endorsing Iran’s murderous fatwa against author Salman Rushdie:

“Imam Khomenei’s verdict regarding Salman Rushdie is based on divine verses and just like divine verses it is solid and irrevocable.”

Now that Iran sympathizer Hadi Matar has been arrested for stabbing Rushdie up to 15 times at a conference in Buffalo, I wonder if Twitter will call an emergency meeting. Willthe higher ups will ask things like:

Are we going too far with our selective censorship? If we’re cracking down on speech we dislike here in the United States, should we also crack down on Islamist speech that incites violence? Should we establish new guidelines?

They may start by actually reading the fatwa that Khamenei endorsed on Twitter’s platform, calling for the heads of Rushdie and others associated with a book that offended them:

“In the name of Allah … I am informing all brave Muslims of the world that the author of The Satanic Verses, a text written, edited, and published against Islam, the Prophet of Islam, and the Qu’ran, along with all the editors and publishers aware of its contents, are condemned to death. I call on all valiant Muslims wherever they may be in the world to kill them without delay, so that no one will dare insult the sacred beliefs of Muslims henceforth. Whoever is killed in this cause will be a martyr, Allah willing. Meanwhile if someone has access to the author of the book but is incapable of carrying out the execution, he should inform the people so that [Rushdie] is punished for his actions.

“May peace and blessings of Allah be upon you.”

It doesn’t matter if only a small percentage of Muslims are triggered by this call to kill in the name of God. Violence is violence. Whether the incitement comes from an imam or rabbi or priest or white supremacist or anyone else, it is dangerous and unacceptable.

But because Twitter is a private company, it has the right to censor or allow any speech it likes. If it decides that “misinformation” regarding Hunter Biden’s laptop or COVID vaccines or election irregularities is more of a threat to society than a call to murder an author, that may be idiotic, but it’s their choice.

Just as Twitter has its rights, however, we have the right to publicly condemn the company for its brazen hypocrisy — for censoring speech that provokes dissenting thought while allowing speech that incites violence from the world’s No. 1 sponsor of terror.

With Rushdie in the hospital after being attacked, will Twitter finally ban the man calling for his murder? Deleting a tweet is hardly enough.

And what about the tweet by Asif Aziz, who tweeted, “Don’t worry you are next” to J.K. Rowling after she tweeted her reaction to the attack on Rushdie: “Horrifying news. Feeling very sick right now. Let him be ok.” Does he not deserve to be banned?

Americans who champion fairness and liberty must hold Twitter’s feet to the fire and call out its blatant double standard and lack of transparency regarding what it chooses to censor. If it’s going to censor anything, it ought to at least target the obvious — speech that kills.

Rushdie has been afraid for his life since his book and the fatwa came out 33 years ago. It’s unconscionable that any social media company would give terrorist leaders a global platform.

Ironically, before Rushdie was attacked, he was scheduled to discuss the United States as a refuge of free expression for writers and other artists. Even more ironically, Twitter, an American company that enjoys the fruits of this refuge, is censoring free speech while enabling those who aim to destroy an author’s very freedom of expression.

Twitter must be counting its blessings that Rushdie will likely survive his horrific ordeal. Until it fixes its policy, it should immediately ban those calling for violence against Rushdie and then send him flowers and an apology.