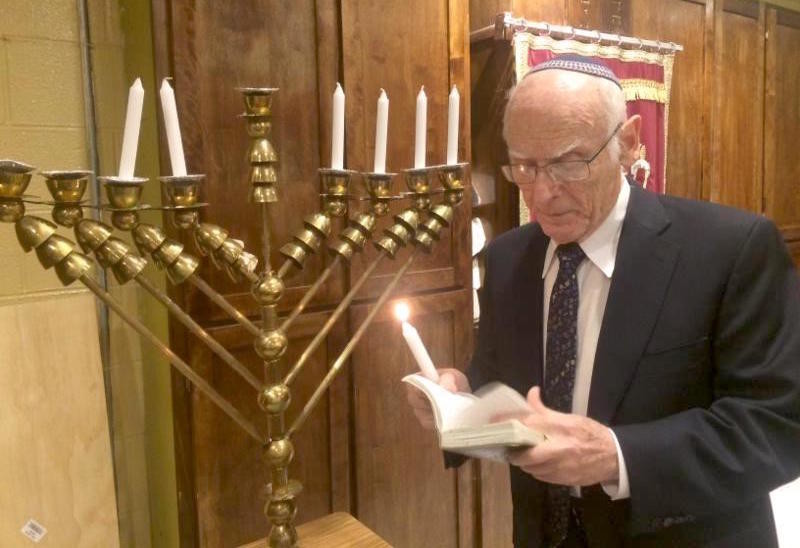 In 2016, Rabbi Moshe Gottesman lit a menorah at HANC that was dedicated in 2003 in his honor. 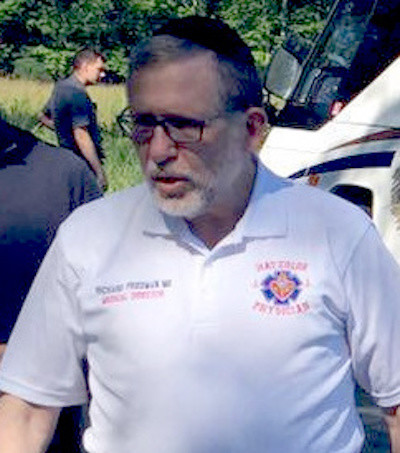 Richie Friedman, active in Hatzalah, was niftar after being hit by a car walking home from shul on motzei Shabbos.
Previous Next
By The Jewish Star

Two pillars of the South Shore Jewish community were lost over the weekend.

•Dr. Richie (Nochum Tzvi) Friedman, 56, active in Hatzalah organizations for more than 30 years, was struck by a car in Lawrence while walking home from shul on motzei Shabbos. His levaya took place on Sunday at the Bobover Beis Medrash in Boro Park and at Yeshiva Darchei Torah in Far Rockaway.

•The levaya for Rabbi Moshe Gottesman, 86, former dean of the Hebrew Academy of Nassau County, who was active in numerous chessed organizations, took place on Tuesday at the Young Israel of Oceanside.

Before moving to the Five Towns from Manhattan, Friedman had been medical director of Chevra Hatzalah for New York City, Monsey and the Catskills, was a founding member more than three decades ago of Hatzolah of the West Side, and was later a member of the East Side Hatzolah.

He was struck by a 2016 BMW at 5:39 pm on Saturday as he was walking north in the roadway on Washington Avenue between Donmoor Road and Broadway in Lawrence, Nassau County police said.

He suffered a traumatic head injury and was rushed to a local hospital where he was pronounced dead, police said. They added that the driver, a 44-year-old man, had remained at the scene and was not injured, and that an investigation was ongoing.

“A void has been left in the Five Towns and us first responders have lost a valued, loving member of our family,” Town of Hempstead Councilman Anthony D’Esposito said on Twitter. “He will remain in my prayers.”

During his tenure with Chevra Hatzalah, Friedman “served as mentor and guide to thousands of EMTs and paramedics,” the organization said in a statement. “He worked tirelessly to ensure that our responders were always at the forefront of emergency medicine best practices. … [He] was pivotal in crafting politics and procedures followed by Hatzalah, as well as several other emergency medical agencies, related to equipment, medications, and protocols used by our responders.”

Chevra Hatzalah concluded that “as it says in the Talmud, ‘Anyone who saves a life is as if he saved an entire world.’ Through his tireless dedication and devotion to saving lives, Dr. Friedman has truly saved an entire world, and his impact will be felt for many years to come.”

The longtime dean of the Hebrew Academy of Nassau County, Rabbi Gottesman remained active with the school in the years since his retirement. He was also the director of tours for Camp Sdei Chemed International for 35 years, was head of Bikur Cholim in South Nassau, active in early Achiezer initiatives, fought to establish the Oceanside mikvah, and helped run the Pearl Greene Sunday Morning Smile Program for special needs children in the West Hempstead area.

“Throughout the years, Rabbi Gottesman has served as inspirational role model, exemplifying the highest ideals, and bearing the torch of Torah on Long Island,” HANC said in a statement.

“Through his vision, relentless passion and endless hard work, the lives of thouands of young Jewish students have been forever enriched.”

His kevurah was to take place in the Eretz Hachaim Cemetery in Har Tuv near Beit Shemesh, on Wednesday. Shiva began on Tuesday at the Regency, 260 Central Ave., Apt 105, Lawrence, with aveilim returning from Israel sitting in Lawrence starting on Thursday morning. Shivah ends after Shacharit on Monday, Dec. 10.