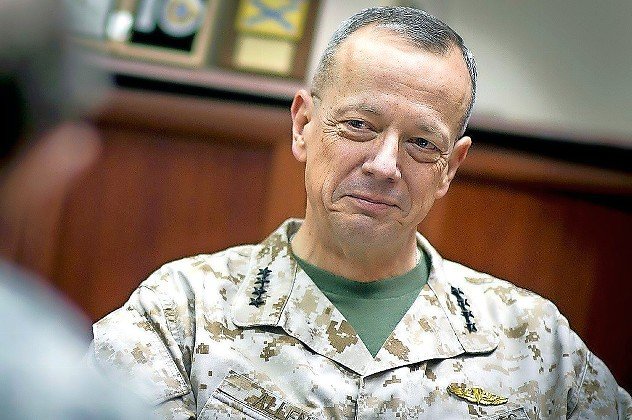 The resignation from the Brookings Institute of former commander of NATO forces in Afghanistan Gen. (ret.) John Allen could have massive implications for Israel.”
By Caroline Glick

A drama now unfolding in the United States has massive implications for Israel. Unfortunately, since there is no anti-Netanyahu angle to the story, the media are ignoring it, and the police are pretending there’s nothing to see here.

Last Monday, former commander of NATO forces in Afghanistan Gen. John Allen resigned his position as president of the Brookings Institute under a cloud of criminal suspicion. Allen has been the subject of an FBI probe for the past several months. He is suspected of deliberately failing to register as a foreign agent while acting as an agent of Qatar in 2017. Under US law, a citizen is permitted to serve the interests of a foreign government only if he registers as its agent with the relevant federal authorities. Failure to register is a felony.

Allen’s resignation was precipitated by an AP story earlier in the month that set out the contents of a 77-page search warrant for his electronic communications that the FBI submitted to federal court in April. The warrant, which was removed from the court’s online docket after the AP published its report, set out the evidence the FBI had gathered in support of its request to search Allen’s electronic communications.

According to the warrant, Allen had connected with the Qatari regime through a top political donor and influence peddler in Washington named Imad Zuberi. Zuberi is currently serving a 12-year sentence in federal prison following convictions for illegal campaign contributions, including on behalf of foreign donors, and failure to register as a foreign agent. Among other things, according to federal prosecutors Qatar paid Zuberi $9.8 million for illegal lobbying efforts on behalf of the Doha regime.

During the period in which Allen is suspected of unlawfully representing Qatar, the Gulf state’s relations with its Arab neighbors were in crisis. Doha’s ties with Saudi Arabia, the United Arab Emirates, Bahrain, Egypt and other Arab states had been disintegrating for years due to Qatar’s role as the chief sponsor of the Muslim Brotherhood and its associated terror groups, including Al Qaeda, the Taliban and Islamic State.

Qatar is Hamas’s chief state sponsor, headquarters and financier. Qatar’s Al Jazeera satellite network serves as an arm of the regime in promoting jihad, the Muslim Brotherhood and the overthrow of non-jihadist Arab regimes, including Qatar’s neighbors. Qatar has also long stood in alliance with Iran, and is Tehran’s closest Arab partner.

Shortly after Trump’s visit, in early June 2017, Saudi Arabia, the UAE, Bahrain and Egypt cut off diplomatic ties with Qatar. They announced a ground and air blockade of their hostile neighbor. Ties would be restored and the blockade would end only after Qatar cut its ties with Iran and the Muslim Brotherhood and shut down Al Jazeera, they said.

The Trump administration initially responded supportively to the Saudi-led campaign. Israel, which was not a party to the campaign, had a clear interest in its success given Qatar’s sponsorship of Hamas and partnership with Iran. It is the assessment shared by Israel and the Sunni states that Iran and the Muslim Brotherhood are the chief threats to their survival. That assessment is the basis for the Israeli-Sunni partnership that spawned the Abraham Accords. Israel designates Qatar an enemy state.

According to the FBI search warrant, shortly after the Sunnis launched their campaign against Qatar, Zuberi (who was then at the top of his influence game) flew to Doha with Allen for a meeting with Qatari Emir Tamim bin Hamad Al Thani and his intelligence and defense ministers. The warrant revealed that during the course of their meeting, Allen advised the Qataris on how to influence US policy. He told them they should “use the full spectrum” of information operations, including “black and white” operations.

Upon his return to Washington, Allen called Trump’s then-national security adviser and fellow Marine general, HR McMaster. Allen convinced McMaster to exchange the initial policy of support for the Sunnis with a more neutral position. Allen did not tell McMaster at the time that he was working as a Qatari agent.

Around the same time these events were transpiring, Al Jazeera announced it was about to broadcast a documentary series called, “The Lobby,” whose goal was to demonize American Jewry by painting the operations of Jewish organizations as a conspiracy to seize the reins of US foreign policy. The series was based on the work of an agent provocateur the network had hired to infiltrate Jewish groups and film their operations. The plant was apparently an anti-Zionist Jewish activist from the United Kingdom who reinvented himself as a pro-Israel student and insinuated himself as an intern in a number of Jewish groups in Washington.

Also during the same period, Qatar hired a politically conservative Orthodox Jewish politico named Nick Muzin to work as its agent. Muzin was a former top adviser to Sen. Ted Cruz and had strong ties to the pro-Israel community in Washington. Muzin’s mission was to draw communal leaders closer to Doha.

In the face of the Qatari network’s threat to broadcast “The Lobby,” Muzin reportedly also struck a deal with the Jewish organizations Al Jazeera targeted that brought about the cancellation of the broadcast.

This bad cop, good cop operation against American Jewry is a shining example of the “black and white” information operations Allen described to the Qatari leadership.

This brings us to the Israeli part of the story.

Allen’s name is familiar to Israelis because in 2013–2014, Allen served as then secretary of state John Kerry’s military adviser in the peace process Kerry tried to initiate between the Palestinians and Israel. Allen devised a security plan that was supposed to convince Israel to relinquish its sovereign rights to the Jordan Valley and to eventually relinquish its military presence on its eastern frontier. To convince the Israeli public to support his radical proposal, Allen recruited retired senior IDF commanders, led by Maj. Gen. (ret.) Gadi Shamni, to sell his plan to the public (in a “white” information operation).

Despite the best efforts of Shamni and his fellow US-funded colleagues, Allen’s plan was rejected by the government. Then defense minister Moshe Ya’alon said of it, “The American security plan that was presented to us isn’t worth the paper it was written on. There’s no security in it and no peace in it.”

But while his efforts failed to convince either the Israeli government or public of the wisdom of rendering Israel vulnerable to foreign invasion from the east, Allen apparently succeeded in making lasting friendships, or business relationships, with the security establishment’s left-wing alumni.

Allen did not receive payment for his trip to Qatar with Zuberi (although Zuberi promised to pay him $20,000 for his efforts). But the FBI warrant shows that the Qataris intended to also pay Allen indirectly for his services, by purchasing the product of an Israeli technology firm he was representing.

According to the FBI search warrant, in 2016, the Fifth Dimension security software firm, led by its then-chairman Benny Gantz, signed a retainer agreement with Allen. Allen was to receive $10,000 a month, and 1.5 percent of the value of any contract he concluded for Fifth Dimension. During the time Allen was putting together his plan for Kerry, Gantz was IDF chief of general staff. Gantz raised a lot of eyebrows in the government and beyond at the time for refusing to join Ya’alon in condemning the Allen plan.

Currently, several former senior employees of the Fifth Dimension are under investigation by Israeli Competition Authority. They are suspected of providing a fraudulent presentation of the company’s artificial intelligence-based spyware to the Israel Police during a 2017 meeting at which they convinced the police to agree to a multimillion-shekel pilot project. The Competition Authority is charged with carrying out the investigation because several of Fifth Dimension’s senior employees were retired senior police commanders, including a former inspector general.

Fifth Dimension claimed it had developed an espionage program based on artificial intelligence technology which could infiltrate a target’s electronic communications, learn the target’s thought patterns and so predict his future behavior.

According to the FBI search warrant, Fifth Dimension tasked Allen with selling its spyware to Qatar. The warrant documents how in November 2016, Allen wrote an email to Fifth Dimension informing his (unidentified) interlocutors that “the Qataris had asked Allen to endorse 5D’s product to Qatar’s Head of Intelligence and Minister of Defense—two of the Qatari government officials with whom Allen later met in Doha in June 2017.

Allen opined that his endorsement would ‘likely complete their decision making and result in Qatar deciding to buy the 5D product.’ According to the Fifth Dimension proposal, phase one of the project was valued at $72 million.”

So in Allen’s case, serving Qatar was worth at least a million dollars in fees from Fifth Dimension. And while this speaks ill of Allen’s character, at least he can argue that he didn’t view Qatar, an ostensible US ally and home of Al-Udeid Air Base, CENTCOM’s headquarters in the Middle East, as a security threat to the United States.

In Israel, there is no question that Qatar is an enemy. At least in 2017, and arguably today as well, Qatar’s actions left no question on this point. Saudi Arabia, Bahrain, the UAE and Egypt were already Israel’s strategic partners against Iran and the Muslim Brotherhood in 2017.

The Qatari spying operation against American Jewry made clear that Doha had Jews worldwide in its crosshairs and could be expected to use Fifth Dimension’s product against Jews in Israel and worldwide. So what were Gantz and his fellow generals thinking?

Writer Armin Rosen, who has closely followed Qatar’s influence operations in the United States, surmised last week that the firm must have been acting in coordination with the Defense Ministry and the wider security community as part of an effort to appease Hamas by keeping its state sponsor happy. But again, this surmise doesn’t accord with Israel’s interests and its clear policy at the time.

There are really only two options: Greed and stupidity. But since there is no Netanyahu angle to the story, we aren’t likely to get answers from either the Competition Authority, whose investigation is in deep freeze, or from the media, which has done everything in its power to silence discussion of Fifth Dimension.

So long as this remains the case, what may be the most egregious corruption case in Israeli history will remain uninvestigated. For now, then, we’ll just have to wait to see what the FBI’s probe of Allen turns up.