The big Negev event was a two-state summit 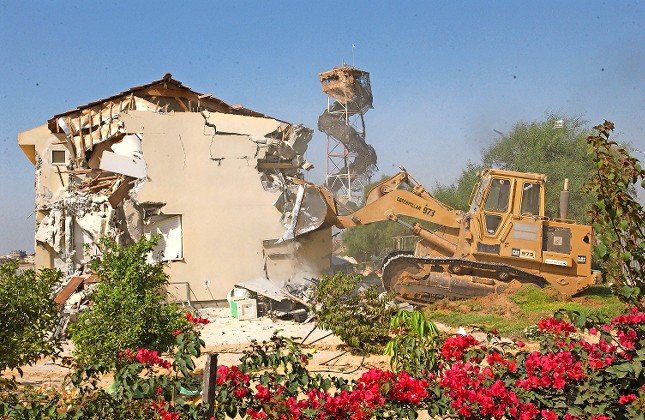 Demolition of Ganey Tal settlement in Gush Katif, Gaza, during the disengagement on Aug. 22, 2005.
Yossi Zamir/Flash90

Blinken’s aim at the summit was to neutralize the Israeli-Arab anti-Iran strategic alliance. He used the two-state solution to achieve this goal.”
By Caroline Glick

The “two-state solution” has made a comeback. That’s the main take-home lesson from the Negev Summit last week. The final remarks of the four Arab foreign ministers, and US Secretary of State Anthony Blinken’s remarks at the summit and throughout his visit, make this glaringly obvious. All of Israel’s guests demanded that it be advanced.

The so-called two-state solution has a hundred-year history of uninterrupted failure. In 1920, the League of Nations gave Britain the mandate for Palestine, which they were legally required to administer as the future homeland of the Jewish people. In 1922, the British carved out the majority of the land set aside for the Jews and established the Arab state of Transjordan, now known as the Hashemite Kingdom of Jordan.

Britain’s initial two-state solution was supposed to end the Arab conflict with Israel. But of course, it didn’t. The Arabs pocketed Transjordan and expanded their war, as they have with every subsequent attempt to implement a two-state solution.

Many Israelis and friends of Israel assumed the so-called two-state solution had finally been exhausted in 2000, when PLO chief and Palestinian Authority chairman Yasser Arafat rejected the Palestinian state that Israel offered him at the Camp David Summit and launched a terror war against the Jewish state.

Israel won Arafat’s terror war by the skin of its teeth in 2004. Last week we marked the 20th anniversary of Israel’s counter-terror offensive,“Operation Defensive Shield,” which began Israel’s long, painful advance to victory. It was launched on March 31, 2002, after a month in which 130 Israelis were massacred in nearly daily suicide bombings countrywide. In all, more than 1,000 Israelis were killed and more than 10,000 were wounded in the Palestinian terror war.

But rather than abandon the disastrous two-state solution and set off on a new course, just months later, Israel resuscitated it with its “disengagement plan.” The plan involved surrendering the Gaza Strip, lock, stock and barrel to the PLO, expelling 10,000 law-abiding Israeli civilians from their homes in Gaza and laying waste to their villages and farms while removing all IDF forces from the area, including the border between Gaza and Egypt.

In other words, then-prime minister Ariel Sharon’s disengagement plan involved the establishment of a wholly independent Palestinian state in Gaza, in keeping with the two-state solution.

Like the establishment of Transjordan and the failed Oslo peace process before it, Israel’s surrender of Gaza and establishment of what became Hamastan in Gaza did not placate the Arabs of the land of Israel — or even in Gaza. They pocketed the concession and used the territory they had received to escalate their war against Israel.

Since the failed Gaza withdrawal, we have seen dozens more plans, peace conferences and envoys all committed to advancing the two-state solution.

There was a sense that the long nightmare with the failed policy paradigm had finally and permanently died during Donald Trump’s presidency and Benjamin Netanyahu’s premiership. But now that Trump has been replaced with Biden and Netanyahu with the Bennett-Lapid-Gantz-Abbas government, last week it came roaring back.

The question is, why? What is it about the colossally failed two-state solution that makes people refuse to abandon it?

The two-state solution is based on two premises. First, that it’s possible to appease the Arabs, that there is an upper limit to their demands and that it is possible to reach it without destroying Israel.

The second is that the Jews and Israel are solely to blame for the conflict with the Arabs, and as a result bear full responsibility for implementing the two-state solution. The reason there is no peace is that Israel is greedy and evil and has offered the Palestinians too little. Accordingly, the job of the international community is to compel Israel to be more generous.

People who want to be viewed as great statesmen, but are unwilling to confront Israel’s enemies for their hostility not only to Israel but to the West, also like the two-state solution. From Henry Kissinger to Blinken, secretaries of state have been able to use the two-state solution as a justification for kowtowing to aggressors from Arafat to Iranian dictator Ayatollah Ali Khamenei. Many have hoped to win the Nobel Peace Prize for their bullying of Israel. All hoped to win the United States immunity from Palestinian terrorists by effectively legitimizing their terrorism against Israel.

Many Israelis have also found it convenient, for various reasons, to support the two-state solution, which blames their country for their enemies’ aggression. If Israel is to blame for the absence of peace, then Israel also has the power to bring peace, and to solve the Palestinian conflict without war. By the same token, if Palestinian antagonism is the fault of Israelis who refuse to accept the blame for Palestinian antagonism, then Israelis who accept Israel’s guilt can join forces with the governments of the world that demand Israel surrender lands it controls to the Arabs.

Blinken’s visit to Israel last week was a challenging moment for him. Like his Biden administration colleagues, Blinken is committed to implementing the Obama administration’s plan to realign the United States away from Israel and the Sunni Arab states and towards Iran.

When Israel learned of then-president Barack Obama’s plans in 2014, Netanyahu opened a diplomatic offensive against them. The pinnacle of that offensive was Netanyahu’s speech before the joint session of Congress in March 2015, where he set out the dangers of the administration’s nuclear deal with Iran.

Led by Saudi Arabia, the Sunni Arab states saw Israel’s outspoken efforts and decided the time had come to set the two-state solution aside. The entire Palestinian issue was dwarfed by the existential threat Iran posed — to them, no less than to Israel.

Indeed, as Israel squared off against the United States and Iran, the Saudis, like the United Arab Emirates, Bahrain, Egypt and other Arab states, wanted Israel to be as powerful as possible, since its fight was their fight as well.

To block criticism of the nuclear deal the United States is now concluding with the Iranians, Blinken’s challenge last week was to neutralize the Israeli-Arab anti-Iran strategic alliance. And he used the two-state solution to achieve this goal.

Before Blinken arrived at the Negev Summit, he held another summit in Ramallah with PLO chief and PA chairman Mahmoud Abbas. When he arrived in Sde Boker, Blinken used his meeting in Ramallah to make the Palestinians the main subject of conversation.

Given the existential threat that Iran poses to the nations of the region, Blinken’s efforts wouldn’t have had a chance of success without Israeli support.

Without a doubt, Blinken’s greatest Israeli supporter is Defense Minister Benny Gantz. Gantz has been carrying out an independent foreign policy aligned completely with the US administration’s anti-Israel positions. Gantz’s independent diplomatic forays have included meetings with Abbas and King Abdullah of Jordan. Media reports last week indicated Gantz was working to bring both men to the Negev Summit, a move that would have ended all talk of Iran.

Gantz is not the only Israeli leader who has been ably assisting Blinken. Prime Minister Naftali Bennett and Foreign Minister Yair Lapid also helped Blinken when they failed to defend Israel against Blinken’s libelous statements about “settler violence,” which is all but non-existent.

In the face of Israeli Arab terror in Beersheva and Hadera, putting Blinken in his place and ending talk of a two-state solution would have been easy. The Israeli Arab terror shows that the two-state solution’s first premise — that there is an upper limit to Arab demands — is false. If Israel surrenders Judea, Samaria and large parts of Jerusalem, the move won’t bring peace. It will move the war to the Galilee, the Negev and the rest of what will be left of Israel. Indeed, it is already there.

But Lapid and Bennett said nothing as Blinken accused their country of imaginary crimes in furtherance of the two-state solution.

Blinken’s two-state solution offensive enabled him to ignore whatever protests over Iran that Lapid and the Arab foreign ministers expressed at the Negev Summit, and to change the subject.

In their final statements at the end of the summit on Tuesday, the Arab foreign ministers ignored Iran and joined Blinken in voicing their support for the two-state solution.

In truth, the main reason the fake policy of “two-state solution” keeps going is that some Jews of Israel have yet to accept the truth about the Palestinian Arab conflict with Israel and what it means. The two-state solution is inherently and necessarily anti-Israel. In a situation where the majority of Arabs living west of the Jordan River (whether in Gaza, Judea, Samaria, Jerusalem, the Negev, the Galilee, the Dan Region, or the Sharon) are unwilling to accept the Jewish state’s right to exist in any borders, you can’t be pro-Israel and pro-Palestinian. You have to choose.

The proper and indeed only adequate response to the anti-Israel two-state solution is Zionism.

To contend with the Palestinians, the Iranians, the Americans and everything in between, Israel must adopt and maintain Zionist policies across the board, whether in military policy, foreign affairs and public diplomacy, in the legal system, in economics or in social affairs.\Without Zionism, Israel will be incapable of defeating the new terror onslaught. It will be unable to block Iran’s path to nuclear-armed regional hegemony. And it will be unable to contend with the Biden administration, which is facilitating both.