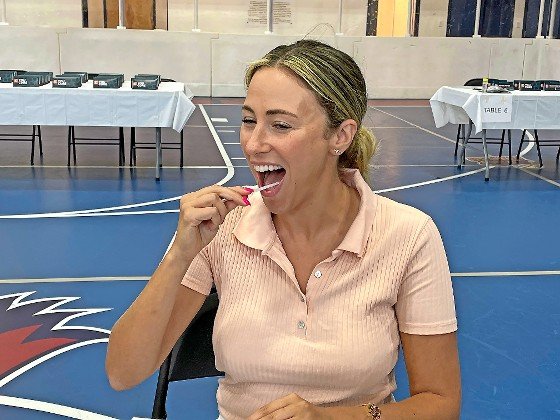 Tzipporah Zimmer of West Hempstead swabbed the inside of her mouth at the Gift of Life Marrow Registry drive at HAFTR High School in Cedarhurst on Sunday.
Jeffrey Bessen
By Jeffrey Bessen

By simply taking four swabs of cells from the inside of your mouth, it’s possible to save someone else’s life, because for every 400 swabs there’s a bone marrow match.

That’s how the Gift of Life Marrow Registry put it as the organization teamed up with the Hebrew Academy of the Five Towns and Rockaway to hold a bone marrow testing event on Sunday.

The collection was intended to help a Cedarhurst resident named Shlomo who was previously diagnosed with chronic myelomonocytic leukemia. His son, Daniel, donated stem cells last November, but the cancer returned, so Shlomo, 61, and his family turned to the community for support. CMML is a cancer that begins in blood-forming cells of the bone marrow and invades the blood. It affects mainly older adults.

Four tables were set up on the floor of the Scott Satran Arena, which is part of the HAFTR High School sports complex. Volunteers instructed donors on the proper swabbing technique, and helped them place the elongated swabs in small envelopes.

“Frequently, when you have … one person who’s ill whose name and picture is attached to a drive, it becomes a driving force in of itself,” said Dr. Adam Lish, a past president of HAFTR and the local coordinator of the drive, who in 2003 made a donation that helped save a young man’s life. Lish is an eye surgeon.

“That’s incredible, considering how hard it is to match,” said Valerie Janovic, the Jewish community engagement coordinator for the Gift of Life Marrow Registry.

The primary demographic for donation is 18- to 35-year-olds, but New York, New Jersey and Florida allow 17-year-olds to donate as well. Donors remain in the database until they turn 60.

The registry, headquartered in Boca Raton, Fla., was founded in 1991 by Jay Feinberg, a foreign exchange analyst for the Federal Reserve in New York, who was diagnosed with leukemia that year. The organization is dedicated to saving lives by facilitating bone marrow and blood stem cell transplants for patients with leukemia, lymphoma, sickle cell and other blood-related diseases.

Feinberg, then 22, learned that he would need a bone marrow transplant, but there was no matching donor in existing registries. His family and friends, including people in the Five Towns, mobilized a drive that tested more than 60,000 people worldwide.

“Ashkenazi Jews were so decimated in the [Holocaust] that when you needed a match for bone marrow, it was difficult,” explained Lish, noting that the last person tested in Feinberg’s case was a match. Feinberg, now 52, has been recognized a number of times by various organizations for his efforts, and has expanded the registry to help ensure that all ethnic groups can try to find bone marrow matches.

It was a slow afternoon at Sunday’s drive, as expected on a hot summer day, but that didn’t matter to Yehudah Meisels of Woodmere.

Tzipporah Zimmer, who came from West Hempstead, said she had seen an ad for the bone marrow drive and wanted to help Shlomo, a father of three who also has two grandchildren.

“I feel as people we have a right to help, so for me that’s what life’s about,” said Zimmer, 33. “If I can help another human, why not? It’s such an easy thing. I’d hope someone would do the same thing for me if I needed it.”

The event was also a meeting of the databases, as YU Connects, a Jewish matchmaking group run at Yeshiva University and open to the general Jewish public, joined forces with the Gift of Life Marrow Registry for the drive.

“The Gift of Life was looking for people under age 35 to help be volunteers, to help be swabbed, and we have a large database,” said YU Connects special projects coordinator Marjorie Glatt, a Woodmere resident. “Our members, the young men and women who are involved there, are always looking for volunteer opportunities and ways to meet each other.”

Those who are interested in donating bone marrow can request a swab kit for home delivery giftoflife.org/Shlomo. To hold a virtual or in-person donor recruitment drive, email Traci Ackerman at tackerman@giftoflife.org.