Shameful HIAS should return to its roots 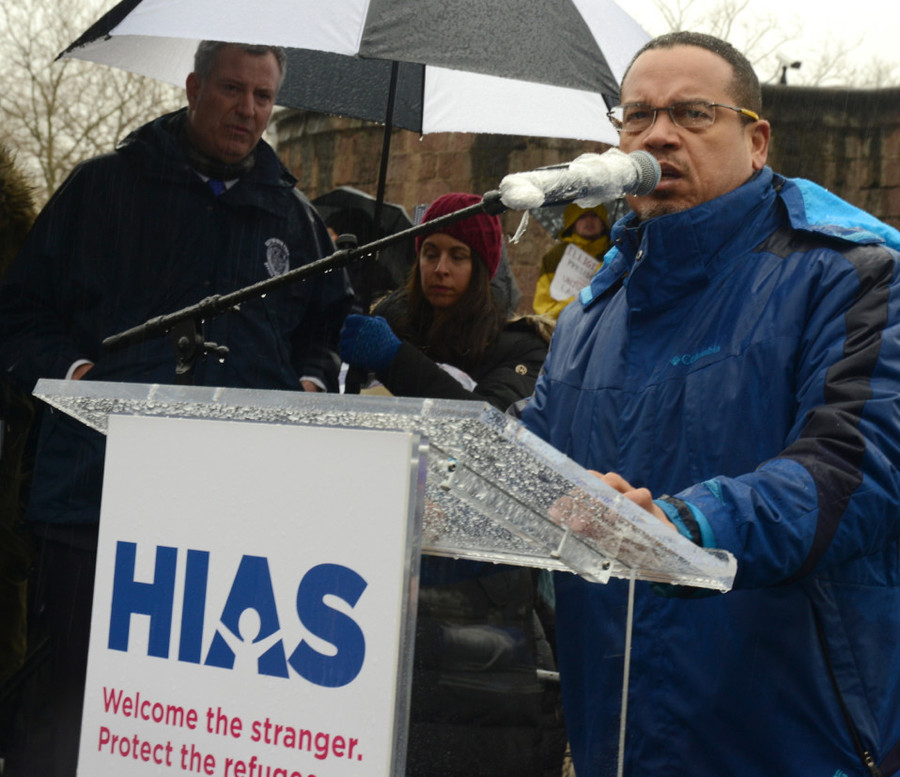 Speaking at a HIAS-organized pro-refugee rally in New York on Sunday: Michigan Rep. Keith Ellison, a contender to head the Democratic National Committee whose past links to the Nation of Islam and recent unsupportive views of Israel have worried Jewish leaders.
By Abraham H. Miller

Imagine you are an impoverished religious Jew living in Paris. You can no longer wear religious garb out of fear of being set upon by assailants from North Africa who will beat you to within an inch of your life, if not take it. Your children are bullied in school, as their teachers ignore their complaints, and might even take perverse satisfaction in their plight.

Even though French political figures make speeches condemning anti-Semitism and police are routinely sent to protect Jewish institutions, the anti-Semitism grows on the body politic with the onslaught of migrants from Muslim-majority countries who carry anti-Semitism with them as part of their cultural and religious socialization.

When immigrant mothers are angry at their children, they unabashedly call them “Jews” as if it were an invective, not caring who hears.

In 2014, a survey of 1,580 French respondents found that Muslims, who comprised one-third of the interviewees, were two to three times more likely to be anti-Jewish than French people generally.

You too would like to leave France, but you don’t want to go to Israel, where the standard of living is more down to earth than luxurious, where there is terrorism and a state of siege, and where the language is difficult to learn.

Who will help you? In your grandmother’s day, there was the Hebrew Immigrant Aid Society—the one and only agency that, with the help of private contributions, came to the aid of European Jews.

But the Hebrew Immigrant Aid Society of your grandmother’s day no longer exists. It has dropped the “Hebrew” and has become simply “HIAS,” avoiding the word “Hebrew” because its clients are no longer Jewish, although the last fundraising letter I received flaunted painful scenes of Jews trying to escape Europe on the eve of World War II.

The Jewish roots of HIAS go back to rescuing Jews from the Russian pogroms of the 19th century. Its role as a lifeline for Jews who had nobody else to help them is prominently displayed in its fundraising pitched to Jews, but the word “Hebrew” might “offend” the Muslim refugees from the Middle East that HIAS is now busy resettling in America.

No longer headquartered in New York, HIAS has moved to the Washington Beltway to be near its new source of funding—the federal government. Refugee resettlement is big business, so much so that it is difficult to parse whether the emphasis is on doing well or doing good.

HIAS is the only “Jewish” organization approved by the federal government to resettle refugees, but it is a small player compared to the other religious and secular organizations in the business of refugee resettlement.

Still, HIAS CEO Mark Hetfield, in 2014, commanded a salary of more than $318,000, plus $22,000 in benefits. In the eight years of the Obama administration, HIAS received funds exceeding $157 million, most of which came from the federal government. A small percentage of this funding is used to lobby the public at the grassroots level and to lobby legislators. Consequently, members of the American public pay for HIAS to convince them, and their elected representatives, to continue to sustain HIAS refugee programs with tax dollars.

There are 65 million displaced people in the world, so this is not a business that is going away. And after 120 days, when organizations like HIAS that bring in refugees can no longer support them and they have not found employment, the resettlement organizations take them to the local welfare office. The majority of Middle Eastern refugees are on some form of assistance, with 90 percent getting food stamps, 73 percent getting medical assistance and some 63 percent receiving outright cash welfare. Middle Eastern refugees cost the American taxpayer more than $64,000 per person.

Now HIAS, with the help of the American Civil Liberties Union, is suing the Trump administration over its travel ban. From his lofty perch, Hetfield is lecturing the American public on how refugee resettlement is the fulfillment of American values. This hectoring earned Hetfield a place on Tucker Carlson’s TV show, where he was asked to explain what values are being celebrated by bringing in refugees. He could not remotely articulate what those values are.

In my value system, there are Jews throughout Europe who are living lives all too reminiscent of the pogroms that gave birth to HIAS. Yet HIAS does nothing for them. Half the Jews of Malmo, Sweden—a favorite destination of Muslim immigrants—have found life there intolerable and have left. HIAS was not there to help.

European Jews will not qualify for refugee status as it is currently defined. The American government will not provide grants to assist them. But they are condemned to lives filled with ongoing terror. The difference between the pogroms of Russia and the violence against Jews in Paris is that in France, the government still attempts to protect Jews.

But as the percentage of Muslims increases in France and throughout Europe, the pogroms launched by them—like the locking of Jews in a synagogue—will get worse. Maybe next time, the mob will burn the synagogue as the French gendarmes are overwhelmed by the sheer number of attackers.

It’s time for HIAS to rediscover its roots. If it is concerned about rescuing the most victimized of people, it should begin with the Jews of Europe who are eager to escape the anti-Semitism of Islam and for whom there is no help in the West. The organization should do this even though there are no government subsidies for these people and, perhaps, no lofty salaries in the offing.

When that is done, I will be most pleased to be lectured not only about American values, but also Jewish values. And my grandmother and mother, who fled the pogroms of Russia, would have been proud of such a version of HIAS.

Abraham H. Miller is an emeritus professor of political science, University of Cincinnati, and a distinguished fellow with the Haym Salomon Center. Follow him on Twitter @salomoncenter.