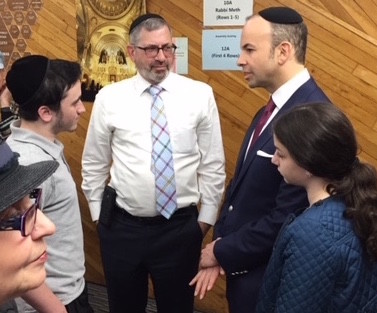 Rambam students, parents, and community members heard Sander expose the history and efforts to get the Taylor Force Act signed into law.

Taylor Force was an American servicemen who did a tour of duty in Iraq and Afghanistan, and then returned to the United States to pursue a Master’s degree. As part of that program at Vanderbilt University, he traveled to Israel with his schoolmates. While there he was brutally murdered by a Palestinian terrorist during a stabbing attack.

Shockingly, the terrorist responsible for this atrocity, Bashar Massalha, was buried with a hero’s funeral. His family now receives monetary payments for his murderous activities. While some people in America and in Israel were aware of Palestinian terrorists being incentivized to attack and murder Jews through local payment programs, few if any were aware of the institutionalized nature and the magnitude of this heinous policy.

Gerber, CEO of Hudson Bay Capital, began to research the issue and was shocked to find that Palestinian LAW mandates that terrorists be rewarded for killing, maiming, and attacking Jews.

Gerber outlined for the Rambam family the extent of those payments and the operational structure supporting them. He demonstrated that in 2017 the Palestinian Authority, which is funded in part by US tax dollars, paid out 350 million dollars to terrorists.

Not only is this outrage codified in Palestinian Law, it shows up in their official annual budget books, representing approximately 8% of their budget. Money paid to terrorists outstrips the money the Palestinian Authority pays to those needing ordinary social welfare and government aid.

Gerber showed a number of video clips of Mahmoud Abbas decrying violence and speaking of peaceful coexistence with Israel, while at the very same time urging Palestinians to take up weapons and use them as needed.

Gerber also spoke about the failure of American elected officials and many in the Israeli government to know about this problem of rewarding terrorists. However, when Taylor Force was murdered, Gerber felt he had no choice but to dedicate his resources, time, money, and efforts to stop this policy, which eventually became known as “Pay to Slay.”

Lobbying members of Congress from both parties, providing them with information including visuals, documents, and spreadsheets from the Palestinian Authority, Gerber was effective in winning over the votes to get the legislation passed as part of the Omnibus Spending Bill on March 23.

Rosh Mesivta, Rabbi Zev Meir Friedman, who introduced Gerber, spoke glowingly about his efforts, highlighting how much one single individual can achieve. Presenting him with a plaque of appreciation at the end, Rabbi Friedman said, “Imagine how much nachas we will have in 10 or 20 years from now when one of our boys sitting in the audience will end up taking the lead, standing up and doing something of tremendous importance for the Jewish community.”

Despite the bell signaling the end of the day, students sat in rapt attention during the presentation, and many even stayed afterwards, surrounding Gerber and asking questions, hoping to learn more about how he accomplished what he did, and how they can get involved.