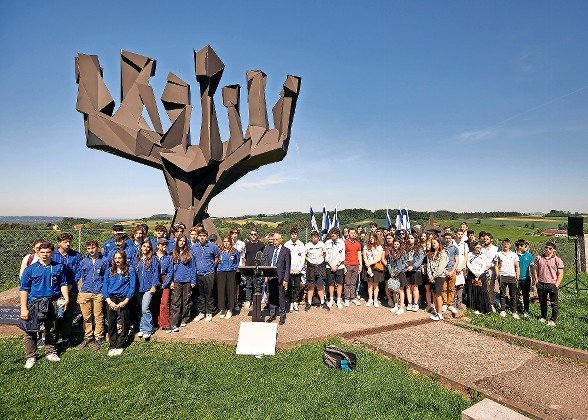 SAR with students from Viennese Jewish youth groups, including B’nei Akiva, at the Mauthausen Concentration Camp.

This article was authored by Gabby Blechner of Scarsdale (right), pictured with and Dahlia Bernstein of Riverdale. 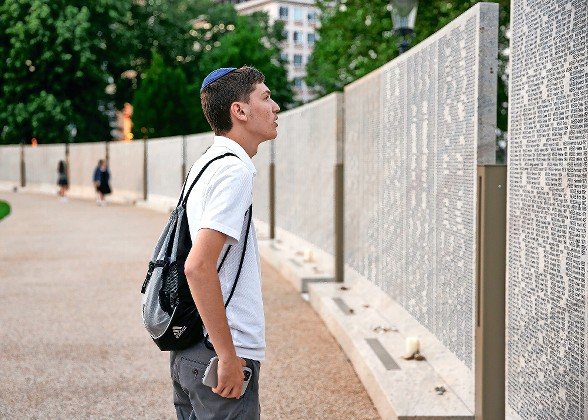 Eytan Saenger, of Riverdale, reading names at the Holocaust memorial in Vienna. 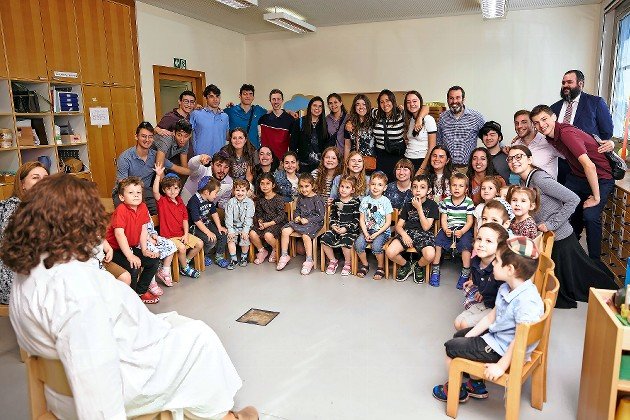 I buzzed with excitement as I boarded the plane to Vienna. Along with 23 other SAR High School seniors, I would be spending the next week working “with school age Ukrainian refugees, provide Shabbat programming for children, prepare and serve Shabbat meals, infuse a sense of ruach and learn about the Austrian Jewish community pre-WWII and contemporary society.”

This would be a chesed mission to Vienna to support Ukrainian refugees. I assumed that just by being in Vienna we would pick up an understanding of the culture and history, but our primary goal was to do chesed. I imagined we would do some touring of the Jewish community, but our focus was really going to be on spending time with the Ukrainian refugees.

I did not understand that I was about to receive an intense education in a part of Jewish history that I really knew very little about.

Austria has a rich but also extremely difficult Jewish history. On Shabbos, a walking tour of Jewish Vienna began in Judenplatz, the town square that was the center of Jewish life in the middle ages. We learned about the killing of Jews that occured in the very spot where we stood. We walked through places where shuls, Jewish owned stores, and Jewish homes stood before being burned or bombed during Kristalnacht and the Holocaust.

We were joined by Greg Schneider, executive vice president of the Conference on Jewish Material Claims Against Germany (Claims Conference), who described the first time he traveled to Austria along with a colleague who happened to be a Shoah survivor from Vienna. His colleague said that though Vienna is an objectively beautiful city, when he looks at the city, he does not see its beauty — he still sees Nazis and Austrians tying up Jews, throwing them in the Danube River, and drowning them. That very disturbing story had an effect on every single person listening.

It framed and helped us understand our trip to the Mauthausen Concentration Camp the following day.

I was shocked when we walked into Mauthausen. I expected to walk into a dark and gloomy place. However, the views as we walked into the camp were among some of the prettiest views I have ever seen. I could not grasp how I could be walking down a path in a place of death on one side and look at the beautiful country views on the other.

Though Austrian Jewish history is quite disturbing, understanding the history made me appreciate the immense kindness that is occuring right now. The Jewish community in Vienna, from which Jews were expelled in the past, has now opened its arms to Jews in need of a safe space, absorbing over 1,000 Ukrainian Jews, providing them with everything from basic living needs to a community. Witnessing the heroism that is occuring in Vienna helped me understand what we, as a group, were doing in Vienna — “Kol Yisrael erevim ze baze,” All Jews are responsible for one another.

We were fortunate to meet and hear from many individuals who exemplify this concept.

We spent time at the Chabad school and heard from Rav Yisrael Wolosow about the role it has played supporting the Ukrainian refugees, taking in over 150 Ukrainian children for free, adding to their previous 400 students. By taking in these students, the school has given them a safe place to be during the day and alleviated some of the parents’ worry.

The school gives the children so much support, from intensive education in German language to social and emotional support, along with regular academic studies. There are even a handful of high school age Ukrainian girls who have chosen to help by teaching the younger children.

On one of our visits to the Chabad school, we heard from one of those girls. She and her family stayed in Ukraine taking care of family and neghbors until the buildings surrounding their house were bombed and they realized they were no longer safe and had to leave. It was a difficult journey for them because they had to smuggle her father out of Ukraine and her new baby sibling did not have a passport. They were able to illegally cross into Moldova and eventually made their way to Israel to stay with her grandparents. She and her friends traveled to Vienna because they speak Russian and wanted to help children who just arrived from Ukraine. Her story was extremely inspiring.

On the last night of our trip, we went out for dinner, which became one of the most meaningful moments on our trip. We walked into the restaurant and noticed some of the Ukrainian refugees we ate Shabbos dinner with at Chabad, including a Ukrainian Chabad rabbi and his wife. The Rabbi was so excited to see us and somehow we ended up standing in the middle of the restaurant with our arms around each other and the refugees, singing Am Yisroel Chai.

This is the work that we came to Vienna to accomplish. We came to bring ruach and lift the spirits of the refugees. We were able to accomplish this because we share the connection of being Jews.

Throughout the trip, the language barrier was difficult, but we had something in common that bonded us together — our Jewish identities. The unification of Jews across the world to support the Jewish Ukrainian refugees is an example of Jews taking care of each other and this is why we always survive and flourish.