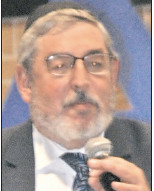 Altabe, 57, is principal of the lower school of the Hebrew Academy of Long Beach, which he attended as a child. The school recently relocated to Woodmere

Altabe received the Audrey Pheffer Lifetime Achievement Award from the JCCRP, an organization that aims to “improve the cultural, educational, social, communal and religious welfare” within its communities, accord-ing to its mission statement. Pheffer is the mother of Rockaways Assemblywoman Stacey Pheffer Amato. For more than 25 years, Audrey held the seat her daughter now occupies.

“I spent 18 years as general studies principal at Yeshiva Darchei Torah, and I view Rabbi Yakov Bender as my mentor in education,” Altabe said. “He taught me that education is much more than academics, rather it is the ability to foster the growth of the whole child.”

Altabe’s career in education nearly didn’t get started. After graduating Hillel High School in Lawrence (now the Hebrew Academy of the Five Towns and Rockaway), he was accepted into New York University’s six-year dental program. His experience as a counselor at the old Hartman Young Men’s Hebrew Association in Far Rockaway helped him realize his true passion.

“I had the privilege to work with newly arrived Russian-Jewish children, and I helped them learn how to read Hebrew and to daven. That success inspired me to pursue education.”

He helped to found the TOVA (Torah Viable Alternatives) Mentoring program in Cedarhurst. Based on the Big Brother/Big Sister concept, it’s an Orthodox Jewish program that matches students with young adults to help them overcome the challenges they face. Altabe is also vice president of CAHAL, a yeshiva-based program of self-contained classes for children with learning differences from kindergarten through high school, also based in Cedarhurst.

“Richard Altabe brings the warmth, the knowledge, the ability and the know how to better deal with children,” said HALB Executive Director Richard Hagler, who has known him for more than 25 years. “He knows the latest techniques in education, and is a warm, caring and devoted principal and person.”

Altabe said he grew up in “a non-Orthodox family,” and said he appreciated the efforts by others such as the late Perry Fish, then the regional director of the National Congregation Synagogue Youth, who guided him through his teenage years.

“I created TOVA Mentoring program to provide that type of guidance to children knowing that without a positive role model children can become at-risk,” Altabe said. NCSY uses social and recreational programs to develop a positive identity in Jewish teenagers.

“He is a very, very special person who doesn’t see twenty-five children in a class, he sees twenty-five individuals,” said Rabbi Bender, the dean at Yeshiva Darchei Torah.

A married father of four adult children and a grandfather of eight, two of whom attend HALB, Altabe has said to his son-in-law Zoli Honig: “Some good people may make money, however good educators make people. If that quote resonates with you and you want to be part of a lifetime of meaningful work then come join us!”

The JCCRP breakfast was held at the White Shul in Far Rockaway.