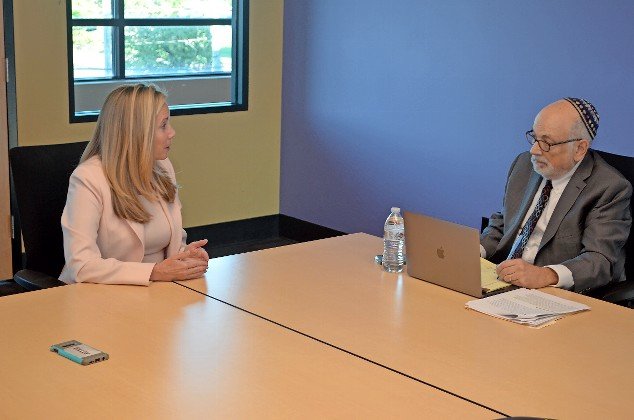 Laura Gillen, Democratic candidate for Congress in the 4th CD, is interviewed by The Jewish Star Editor-Publisher Ed Weintrob.
The Jewish Star photos by Tim Baker

Anthony D'Esposito, Republican candidate for Congress in the 4th CD, is interviewed by Herald Community Media reporters and by Ed Weintrob (right), editor-publisher of The Jewish Star.
The Jewish Star photos by Tim Baker
Previous Next
By The Jewish Star

Candidates running to succeed retiring Rep. Kathleen Rice in the 4th CD — representing Nassau County’s South Shore in Congress — each pledged to support Israel and oppose BDS, during interviews with reporters from The Jewish Star and Herald Community Media at the news organizations’ offices in Garden City last week.

Excerpts from responses by Democrat Laura Gillen and Republican Anthony D’Esposito to questions posted by The Jewish Star Editor Ed Weintrob appear below. The Jewish Star will continue to report on this contest through election day.

Gillen served one term as Supervisor of the Town of Hempstead, the largest township in the US. When elected in 2017, she was first Democrat so chosen in more than a century.

D’Esposito is a Town of Hempstead councilman whose district includes the Five Towns. He is a retired NYPD detective and former chief of the Island Park Fire Department.

The Jewish Star: On your website, all of your priority issues are domestic. In Congress you’d deal with foreign policy. So specifically for my readers, we would like to know your position on issues involving Israel, the United States’ relationship with Israel, and the deal the President has been trying to work out with Iran.

Laura Gillen: I believe that Israel is one of our greatest allies. I would represent, I think, one of the largest Jewish populations outside of Israel.

But I believe supporting Israel is not just my duty as a representative; as an American, I think Israel is a key ally. Israel is unique as a democracy in the Middle East. Israel is very progressive. It has a really diverse government.

In terms of Iran, one of the things that keeps me up at night is a nuclear Iran.

My uncle worked in Iran at the time of the fall [of the Shah, in 1979] and had to flee Iran with his family and luckily he got out. He was working for Grumman over there.

I feel like the prior deal, I wouldn’t have voted for it — because I thought that sunset provisions were too weak, I thought the regulation and oversight was too weak.

We have to have more inspections, rights to inspections; we have to extend those sunset provisions. That deal would have to be really clear that we are keeping Iran away from developing a nuclear weapon for me to even consider it.

Star: What about Iran’s involvement in terror activities apart from its nuclear ambitions?

Gillen: That’s part of the reason why I lose sleep about a nuclear Iran. I don’t think Iran can be trusted. Iran is a major funder of terrorism throughout the world. And honestly, I don’t have a lot of optimism about the new deal with Iran. And I think that the recourse is going to be sanctioning Iran — really, really stringent, strong sanctions on Iran.

Star: There’s been legislation passed in various states and in the Town of Hempstead [sanctioning those who support BDS. Some have criticized this] on civil liberties grounds. Where do you stand on restrictions against BDS

Gillen: I’m fine with restrictions against BDS. I don’t support BDS. I think it’s being promoted with an anti-Semitic agenda.

The Jewish Star: International politics doesn’t seem to be at the top of everybody’s agenda these days. I want to know your view of the American relationship with the Jewish state.

We have done a lot in the Town of Hempstead; we passed anti-BDS legislation — one of the first of its kind. It was something that we were proud of and hoped that we’d never have to use it. A couple of months ago, we had the Ben and Jerry’s issue where we literally directed every commissioner and director in the Town of Hempstead to begin cutting any purchases with Unilever [which owns Ben & Jerry’s].

My relationship with the Jewish community has always been one that I think is very welcoming. I have great relationships with the religious leaders in the Five Towns, the area that I represent now. At least when it comes to Israel and the Jewish community, I’ve been someone that has always been there, always spoken out against hate, always promoted the relationships that we need to maintain with Israel. And that will always continue if I’m elected.

Star: Do you see a path or solution to the conflict there involving Israelis and Palestinians and others?

D’Esposito: I think that the progress that was made during Ambassador Friedman’s reign has somewhat halted, and I think taken maybe not a different direction, but I don’t think as much interest has been served in it.

I’m hoping that with some louder voices and bipartisan action with maybe a [Republican] majority in the House, we’ll be able to push that message a little further.

Star: On BDS, do you see a concern about blocking the civil liberties of individuals who want to advocate for BDS ideas in this country? Do you feel that people and corporations in America should not be allowed to advocate any of the platform points that BDS is pushing?

That’s one of the reasons why we put the legislation in place that we did in the town.

Star: As far as what’s happening with the Iran deal, do you see a role for Congress in this?

D’Esposito: I would hope so. We have to get to a point where there’s conversation, because right now, it seems like the New York delegation is not having conversations about it. …

Congress needs to step up and push legislation, push agendas, push their power to influence the White House to get to a place that we need to be.