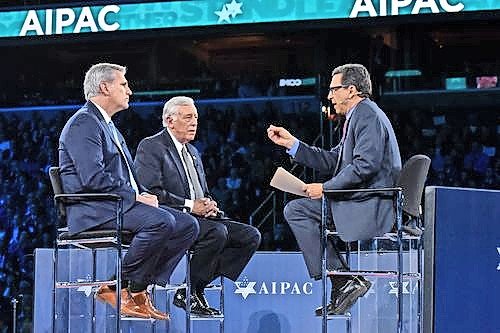 Former Ambassador to the United Nations and South Carolina governor Nikki Haley was preaching to the choir when she fired a shot over the bow of AIPAC at the annual conference of the Republican Jewish Coalition in Las Vegas this past weekend. Along with other GOP 2024 hopefuls and political celebrities, Haley was at the RJC event to reach out to the pro-Israel community and demonstrate her pro-Israel bona fides. [Click here to read story.]

Like the other speakers there, she was eager to deride the Biden administration, woke leftists and warn about the dangers of the Democratic Party’s influential anti-Israel faction. But Haley struck a nerve when she mentioned AIPAC.

“I have spoken at AIPAC events many times, and they’ve always been unbelievably supportive to me,” she said. However, she then added that “if a politician supports the disastrous Iran deal, opposes moving the American embassy to Jerusalem and is embraced by anti-Semites who support the BDS movement, then your pro-Israel group should have absolutely nothing to do with him.”

That was catnip to the RJC, many of whose activists have given up on AIPAC and what they consider its unhealthy obsession with bipartisanship. They think that the lobby’s belief in bipartisanship as the foundation for the pro-Israel community’s influence is at best outdated, and at worst, merely a cover for a slow-motion abandonment of Israel.

Jewish Republicans view most Democrats’ embrace of former President Barack Obama’s Iran nuclear deal as an act of treachery that undermined the security of Israel and the West. They regard Jewish Democrats, who used to loudly cheer false promises by past presidential candidates from both parties about moving the embassy to Jerusalem but then dismissed former President Donald Trump’s historic tilt towards Israel on that issue and others, as hypocrites.

Just as important, they are shocked by the tolerance that many liberal Democrats have demonstrated for influential members of their party who are open Israel-haters and anti-Semites, like “Squad” members Reps. Ilhan Omar (D-Minn.) and Rashida Tlaib (D-Mich.). They say it demonstrates that not only do they care more about partisanship than the Jewish state but that their claims to sound the alarm on Jew-hatred are utterly insincere.

In its defense, AIPAC’s focus on building a broad coalition of supporters of Israel regardless of party affiliation was the foundation of its success. The conceit of AIPAC was to encourage people across the ideological spectrum to befriend politicians from both parties. With AIPAC’s help, officeholders came to understand that joining the ranks of the pro-Israel movement didn’t just help them raise money from Jewish donors, but placed them in the mainstream in a country where love of the Jewish state is baked deep into America’s political DNA.

That formula worked well for decades. In a country in which there are two major parties that have exchanged control of Congress and the White House several times in the last 30 years, it made no sense for supporters of Israel to concentrate on one to the exclusion of the other.

Though AIPAC’s mythic status as the all-powerful “Israel lobby” that Jew-haters obsessed over was highly exaggerated — its influence did not compare to lobbies that represented various powerful industries and didn’t cancel out the support that the Arab lobby could count on in the State Department and much of the government bureaucracy — the group’s ability to get results was real.

But the AIPAC formula that was conceived and first achieved success in the 1970s and 1980s is no longer working.

Part of the reason for that is that the two parties have more or less exchanged identities on Israel in the past half-century. Democrats were once the solidly pro-Israel party. Now, its members are deeply divided over it with its left-wing activist wing increasingly influenced by intersectional ideology that falsely claims that the Jewish state embodies “white privilege” and that the Palestinian war to destroy it is somehow akin to the struggle for civil rights in the United States.

At the same time, the GOP is now nearly unanimous in its affection for the US-Israel alliance. That trend reached its apotheosis under Trump, who can lay claim to being the most pro-Israel president to date, even if Democrats and the majority of Jewish voters give him no credit for it.

While the congressional leadership of the Democrats still firmly identifies as pro-Israel — as demonstrated by the determination of House Speaker Nancy Pelosi and House Majority Leader Steny Hoyer not to let the opposition of the so-called progressive wing of their party stop funding of the Iron Dome missile-defense system earlier this year — members of the party are just as likely to be found among Israel’s most fervent ideological opponents as its friends.

It is wrong to label all Democrats as being as bad as the “Squad.” But when push has come to shove on key issues of interest to the pro-Israel community, most of them fell short.

That meant that some who are not only Jewish but who have long claimed to be Israel’s most ardent defenders either joined the other side on the Iran deal — as did former Democratic National Committee Chair Rep. Debbie Wasserman-Schultz (D-Fla.) — or simply acquiesced to their party’s betrayal, as Senate Majority Leader Chuck Schumer did.

With courageous exceptions to this standard few and far between, such as Rep. Ted Deutch (D-Fla.), who both opposed the Iran deal and called out Tlaib and others for their anti-Semitic invective during the House debate about Iron Dome, it’s possible to argue that perhaps those cheering Haley’s comments are right about AIPAC’s failure and the need to reject bipartisan advocacy.

Yet it’s both premature and unwise to completely write off AIPAC.

It is deeply wrong for Jewish Democrats to accuse their GOP counterparts of politicizing the issue of Israel since it was their party, and not the Republicans, which failed on Iran and Jerusalem, as well as by their cowardly refusal to reject the anti-Semitism of the progressives. But the goal of pro-Israel advocacy can’t be to convince all Jews to become Republicans. That would be true even if it were possible, which it isn’t, given the fact that most believe so-called social-justice issues are actually more important than Israel and fail to see that anti-Semitism is as much a danger on the left as it is on the right.

The objective for the pro-Israel movement is not to destroy the Democrats, but to get them to return to their former stance of strong support and revive a consensus that the extreme left is destroying.

That means that efforts to cultivate moderates and even some progressives — and to convince them to back the Jewish state — is still both the right thing to do and good politics must continue. At the moment, that looks like a losing battle, as the party’s growing progressive wing has fallen under the spell of toxic ideas like critical race theory that give a permission slip to anti-Semitism.

In American politics, change is a constant.

The left may have thought the future was theirs after the rise of the Black Lives Matter movement and the defeat of Trump. But the party’s radical tilt may herald its impending defeat in future elections and a necessary course correction that will eventually bring it back closer to the center. At that point, if AIPAC is still doing its job, pro-Israel Democrats will be there to reap the benefits.

That doesn’t mean Republicans shouldn’t continue to oppose the left’s anti-Israel invective and Biden administration policies that undermine the alliance.

Yet in the long run, the pro-Israel community will be stronger if AIPAC is capable of vindicating its bipartisan strategy. If it can’t, then that will be a tragedy for both the Democrats and the lobby.