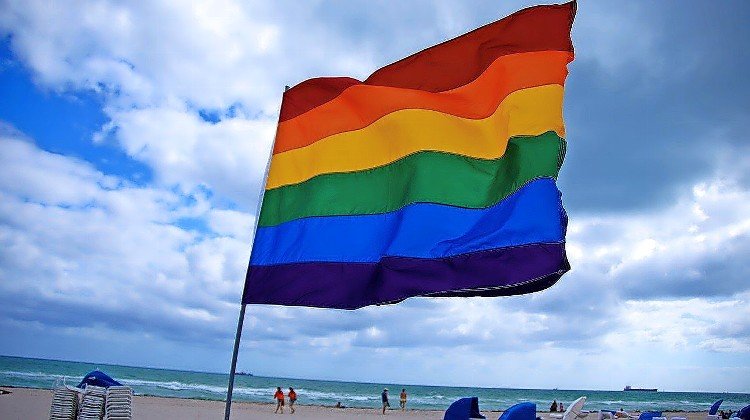 A rainbow flag on South Beach, Miami, in  2011.
Ted Eytan/Wikipedia

At the height of Pride Month, while countries around the Free World are going out of their way to celebrate the LGBTQ+ movement through parades, public-service announcements and all vehicles that highlight “choice” and “identity,” the very idea that any venue would dare to let DeSantis darken its premises presented a golden opportunity for bitching and moaning about victimhood.

The trouble is that this reactionary method of manipulation to silence all voices that don’t align perfectly with a “progressive” point of view works — at least, on liberals. Afraid to be labeled as Neanderthal right-wingers, the latter cave to pressure at the drop of a threat.

This is how the Tikvah conference, titled “Jews, Israel and the Future of the West,” got booted last month from its originally planned location, The Museum of Jewish Heritage in lower Manhattan, whose excuse was that the institution doesn’t “do politics.”

Given that the site had no problem welcoming such Democratic politicians as Rep. Alexandria Ocasio-Cortez, Senate Majority Leader Chuck Schumer, Gov. Andrew Cuomo and former Mayor Bill de Blasio, the claim was clearly bogus. Still, no official documents had been inked, so the museum was able to reject Tikvah, despite its initial assent.

This wasn’t the case with Chelsea Piers, however, which not only agreed to accept oodles of cash to host the conference, but was contractually bound to do so by the time left-wing activists got wind of the arrangement and complained. To cater, retroactively, to the anti-free-speech screechers, the major Manhattan recreation center announced that it would be donating the proceeds to LGBTQ+ causes.

Naturally, this ridiculous attempt at kowtowing to bullies wasn’t sufficient for the DeSantis detractors who turned out to express their displeasure. Whether those who vowed to boycott Chelsea Piers will make good on their promise remains to be seen. It might be difficult for all the gay couples with upcoming weddings scheduled at Pier 60 to find an alternative in short notice.

But the sentiment that no Republicans, least of all DeSantis, should have the right to talk — in this case, about Jewish issues — was shared by the apoplectic, reactionary hordes. An additional common thread linking them to one another and to their apologists was a total lack of familiarity with the legislation that united them in hate against the governor of the Sunshine State.

This is giving them the benefit of the doubt, of course, since anyone who has read the bill and refers to it as “don’t say gay” is a bald-faced liar.

First of all, Florida House Bill (HB) 1557 is titled “Parental Rights in Education.” It “prohibits classroom instruction on sexual orientation or gender identity in kindergarten through third grade, and prohibits instruction that is not age-appropriate for students and requires school districts to adopt procedures for notifying parents if there is a change in services from the school regarding a child’s mental, emotional or physical health or well-being.”

It’s hard to fathom that even the most “woke” of American society would wish to have his/her/their/its (forgive me if I left out the rest of the zillion possessive pronouns out there) toddlers taught about sex at all.

Secondly, this doesn’t and shouldn’t apply only to sex. It is just as relevant to all topics raised in pre- and elementary-school classrooms.

Parents of youngsters who are barely able to tie their own shoe laces or cross the street by themselves are responsible for family decision-making. This is their right and their duty.

Educators are tasked with what the name of their profession suggests. And if they were to focus on the skills that matter to little tykes, such as reading and telling time, everyone would benefit.

No good comes of inundating 5- and 6-year-olds with subjects that they are not ready to handle. This is why they aren’t forced to study calculus or the origins of communism until much later, whether or not they receive indoctrination in either or both at home from birth. DeSantis simply gave this concept an official stamp of approval, much to the delight of his constituents.

“They can’t cancel me; I’m going to speak my mind,” DeSantis said in his opening remarks to the conference. “You know, I saw that there was a little opposition to me coming here. All I can tell you is this: When the left is having a spasm, that just tells you that, in Florida, we are winning.”

Which brings us to the real impetus for the attempt to muzzle his unmasked mouth: the assumption that he will run in the Republican Party presidential primaries, coupled with the fear that his bid could lead him to the White House.

Their trepidation that the next person to occupy the Oval Office will not be a Democrat is justified. It’s what comes of their having gone off the ideological deep end into woke la-la land.