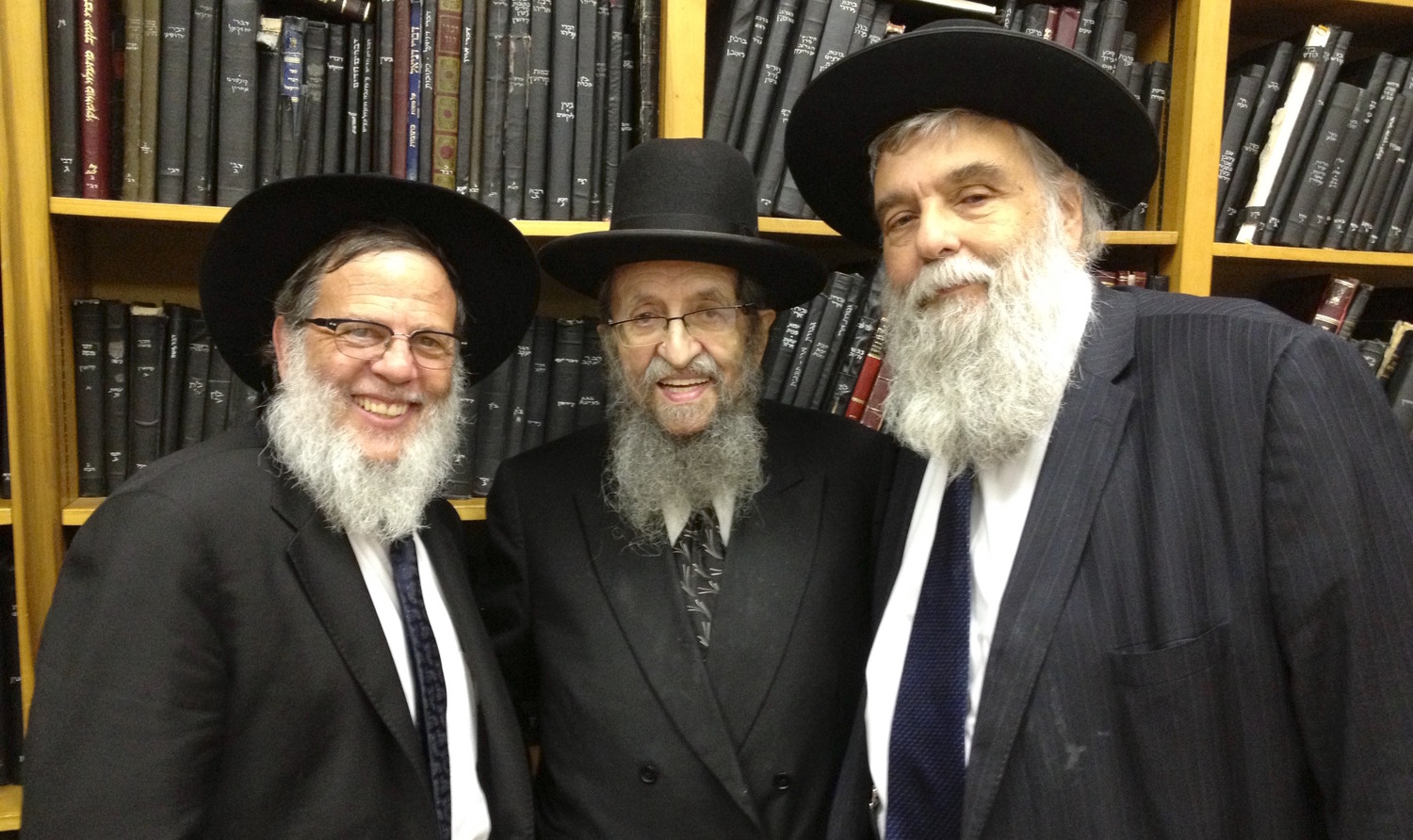 Rabbi Chanina Herzberg is pictured with, from left, Rabbis Mordechai and Shmuel Kamenetzky. 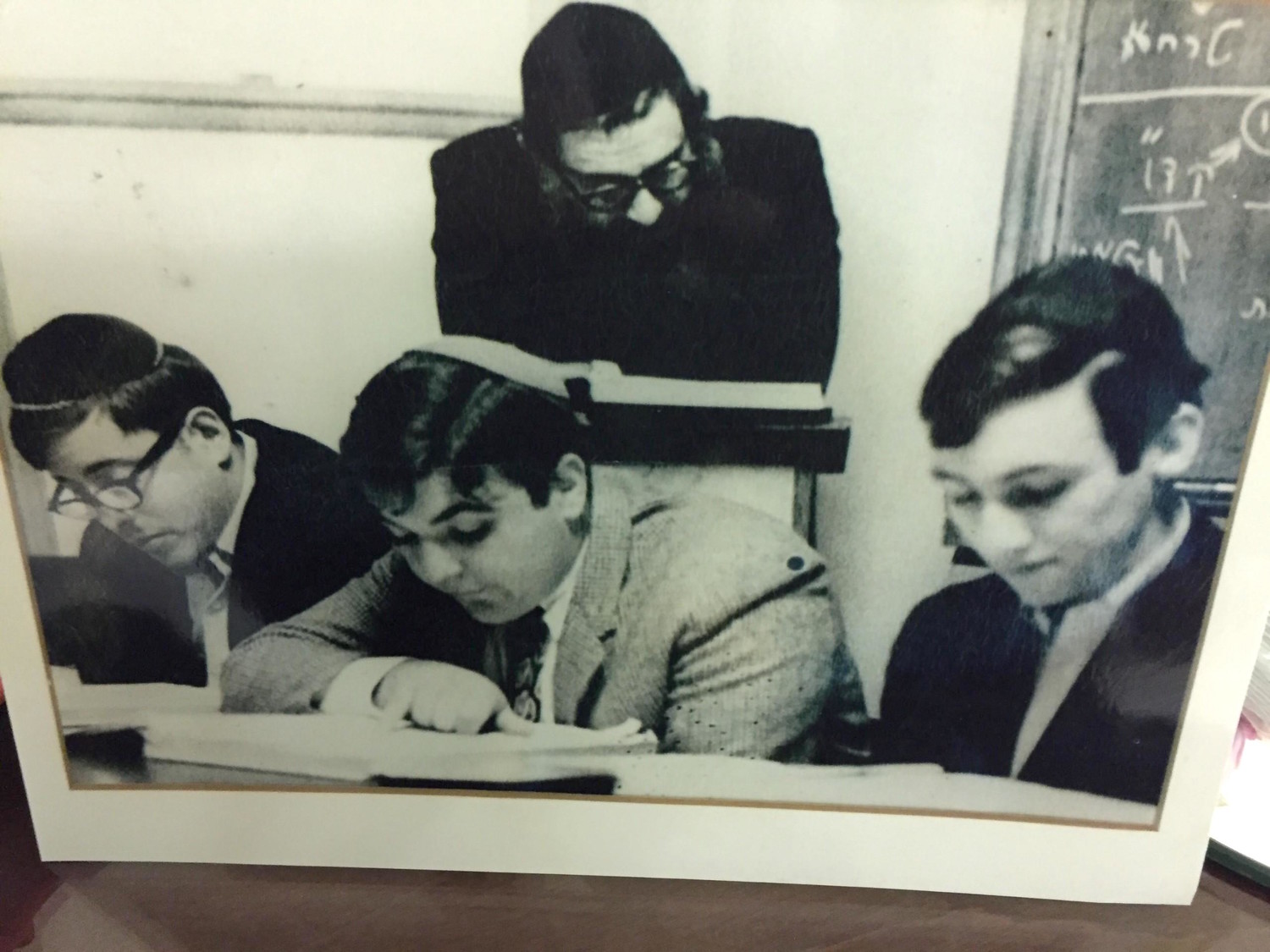 A young Chanina Herzberg with Rav Shlomo Freifeld looking on.
Previous Next
By Rabbi Shmuel Kamenetzky

Yeshiva of South Shore, together with the Five Towns and Far Rockaway community and the Torah World, suffered a tremendous loss with the petirahof Rav Chanina Herzberg, the yeshiva menahelfor nearly forty years,

Rabbi Herzberg was a master mechanechand leader. He guided the yeshiva through generations of talmidim, working hand-in-hand with the rosh yeshiva, Rav Binyamin Kamenetzkyzt”l.He kept the talmidimforemost on his mind, and he would often tell rebbeim, “Remember, you work for the talmid! Not for the board of directors, and not for the parents!”

Keeping to a cherished mesorah, he focused on the “core curriculum,” ensuring that rebbeimspent time on the basics of reading, Chumash, Mishnayos, and Gemara. Although always ready to innovate, he would not lose focus. His goal was to incorporate everything from hilchos lashon hara to yedios klalios within the context of the main limudimin yeshiva.

His embrace and acceptance of every child came from an encounter with one of the gedolei Yisrael as a young boy. Young Rabbi Herzberg, then known as Charlie, grew up in East New York and attended Yeshiva Toras Chaim there. When he was ready for high school, his menahel, Rav Yitzchok Schmidman, took him to Rav Hutner zt”l in the hope that he would be accepted to Chaim Berlin. Rav Hutner farheredhim, but as Reb Chanina would later admit, he did not do well.

Then Rav Hutner asked a final question, “Do you want to learn?” “Yes!” young Chanina replied. “Well then, you’re in!” Rav Hutner replied.

Rabbi Herzberg often repeated that question to boys old enough to understand that will to learn is the key.

When speaking to talmidimabout the importance of choosing the right mesivta, he would often say that in eighth grade, he wanted to go to the yeshiva with the best basketball team. But when he met Rav Hutner, that all changed!

He enrolled in Chaim Berlin, where he spent a lot of time in the office of the menahel, Rav Shlomo Freifeld. When Rabbi Freifeld opened Sh’or Yoshuv in Far Rockaway, Rav Chanina was one of the first talmidimto join him. From that moment on, he never left his rebbi.

It was a message he imparted to all the boys at YOSS. A few years ago, with two weeks left to the school year, a boy was acting out. When his rebbireprimanded him, the boy shot back, “You’re not my rebbianymore anyway!” The rebbibrought the boy to Rabbi Herzberg, who asked, “For how much longer will your rebbibe your rebbi?” “Only two more weeks,” the talmidreplied. Rabbi Herzberg banged on his desk and looked into the talmid’seyes. “Your rebbiis your rebbifor the rest of your life!”

When he interviewed potential rebbeim, he asked two important questions. What are you learning? And who is your rebbi? If the candidate did not have an adequate answer, the interview was over.

Rav Chanina was a master mechanech. He did not look at external factors and pass judgment. He looked at talmidimand saw Yiddishe neshamos. He made it his mission to reach every boy in his yeshiva. Alumni would joke that the more trouble you made, the more you would love Rabbi Herzberg.

At the levaya, his son Yudi told of how he had once received a 55 on a math test. Rabbi Herzberg, noticing his son’s disappointment, said, “That means you’re batting 550!” He looked at every talmidand saw potential.

As a menahel, there were times he had to discipline a child. But he did it lovingly. He was tough, and did not back down on what he believed was true. But he would look at a talmidwith penetrating sincerity. There was so much love in that look. His talmidimunderstood everything from it, even before he gave his rebuke, and sometimes consequences. They knew that it came along with a genuine love.

Once, a rebbicaught a talmidplaying Hangman in class and sent him to the menahel’soffice. Rabbi Herzberg, knowing the boy could use some chizzuk, looked at the paper, grinned, and with a twinkle in his eye, told the boy, “Ah! You’re playing hangman? Give me a ‘K’!”

He stood behind his rebbeimand backed them under all circumstances. A young, fresh rebbionce had to discipline a talmidwhose father was an active board member and a big supporter of the yeshiva. He received a phone call that night from the boy’s father threatening his job. The next day, the rebbirepeated the conversation to Rabbi Herzberg, very nervous about his future. Rabbi Herzberg told him bluntly. “There is one person here who makes the decision to hire or to fire a rebbi. That person is me! Don’t worry. Your job is secure!”

Rabbi Herzberg was a true hatzneia leches. He was not a public person, nor did he want any kavod. Although he had much chinuchwisdom to share and was often asked to enhance simchoswith his wonderful divrei Torah, he shied away from public speaking. One of his sons asked why he never lectures in public chinuchforums. “I have one mission,” he answered, “To be the menahelof Yeshiva of South Shore. If I start speaking here and there, I will not be able to use my full energy for the boys in yeshiva. It will distract me from my purpose!”

Once, one of his children noticed that he was not himself — he was not eating, and was pacing a lot. When asked what the matter was, he responded, “There is a boy in yeshiva, who, for various circumstances, had to be asked to leave. It pains me greatly, and it’s not a simple matter. But I had to do it. This week I received a phone call from a local rav berating me for my decision! Does he know that I spent three days agonizing over it? Does he know that I secured a place in another yeshiva for this boy? Does he know that I fasted on the day I asked the boy to leave?”

Rabbi Herzberg began his career teaching seventh grade at Yeshiva Tiferes Moshe in Queens. His first year was not easy; the yeshiva had split the class and assigned him a group of boisterous weak students. Yet despite the challenges, he persevered. In fact, a talmidof Rabbi Herzberg from Tiferes Moshe some forty years ago, requested, on the spot, to say divrei hesped at the levaya. He got up and spoke about how close he still feels to his rebbi, and how he still feels hakaras hatovto him.

He was then promoted to assistant menahelin Tiferes Moshe. Only a few years later, Rabbi Binyamin Kamenetzky zt”l asked him to join Yeshiva Toras Chaim of South Shore. He was excited at the thought of rejoining his alma mater but was apprehensive. Younger than most of the rebbeimin YOSS, he was nervous about accepting a position of leadership. He asked his rebbi who assured him that he would earn their respect. The many older rebbeim, some who are still in the yeshiva and others who came back to the levaya, attest to that.

At home, he was an amazing father — he never preached, but led by example. His son Reb Eli, a beloved Pre 1A rebbiat South Shore, said that on Purim his father handed him $500 and told him, a teenager, to give it to poor people in Far Rockaway. In addition to the erev Yom Tov tzedakathat the Yeshiva gave to needy families, Rabbi Herzberg would purchase hundreds of dollars of gift cards with his own money and give them to almanosbefore Chanukah, allowing them to give gifts to their children.

Though he thought about the yeshiva 24 hours a day, he generally did not bring his work home.  He did not diminish the focus and attention he wanted to give his children. He focused tremendous energy on raising them and giving them the attention they deserved.

He was always focused on personal growth. One Yom Kippur, in his shul, Ohr Shlomo, he got up in front of the crowd, and in midst of a speech on hakaras hatovand self-improvement, said, “Many people have criticized me for not thanking my rebbeimin yeshiva enough, and not recognizing their devotion to chinuch. I am publicly saying that I realize, and I am going to change that!”

He had tremendous respect fortalmidei chachamim.Besides his own rebbeim, he would honor any talmid chachamand rav. He internalized many stories of gedolimthat he heard.

He had heard the story of the rebbitzenof Rav Yonasan Steif, who approached the mechitzato get a glimpse of Rav Moshe Feinstein zt”l at a wedding, saying, “I want to see the tzaddikfor whom my husband puts on his hat and jacket when he talks to him on the phone.”

The story made an impact on him. His son Rav Yitzchok, menahelof Yeshiva Chaim Berlin, said he once noticed his father put on his jacket, walk into his study and make a phone call, then come and take the jacket off. He asked him to explain. “I had to call Rav Hillel David about a shaila,” Rabbi Herzberg said. “When I speak to Rav Hillel, I put on a jacket!”

On the rare occasions when he had to ask a rebbito leave, it was with serious consideration and thought. He would make sure to arrange another source of parnassafor the rebbi.

He had the ultimate chashivusfor tefillah, and he taught by example. He made sure that Shacharis and Mincha in yeshiva began on time, and he was at the helm, standing by the amud, ensuring proper kavod hatefillah. Every. Single. Day.

Once on vacation, it was close to sunset and there was a group forming a minyan. They pushed him to join, and did not want to wait for him to go back to the car parked some distance away. He reluctantly agreed, telling his children his hat was in the car but he was afraid the minyanwould break up if he went to get it. It was the only time in memory he remembered davening without a hat.

Talmidimremember him wearing Rabbeinu Tam tefillin, and lovingly choosing a different boy every day to wrap his Rashi tefillin during chazaras hashatz. The class that sat in front of his seat relished the opportunity.

His devotion to talmidimwas amazing. When he was able, he went to every bar mitzvah, even if it meant walking miles to Woodmere or Hewlett from his Far Rockaway home. He left his own son’s vort to speak at the weeknight bar mitzvah of a talmidin Brooklyn.

A number of years ago, he suffered a heart attack. As he was about to undergo a serious procedure, he told his son “The biggest zechusI have is that I always try to make people feel good when they see me!”

During the last two years, despite his progressing illness, he would come to yeshiva as often as he could. For him, there was no such thing as relaxation. In his weakened state, his wife and children would try to dissuade him from going, telling him he had to relax.

“The yeshiva is my life,” he would say. “They need me there. The talmidimare waiting for me.”

Indeed, Yeshiva of South Shore needed him. We await his return at techiyas hameisim.

Rabbi Shmuel Kamenetzky is director of development at Yeshiva of South Shore.