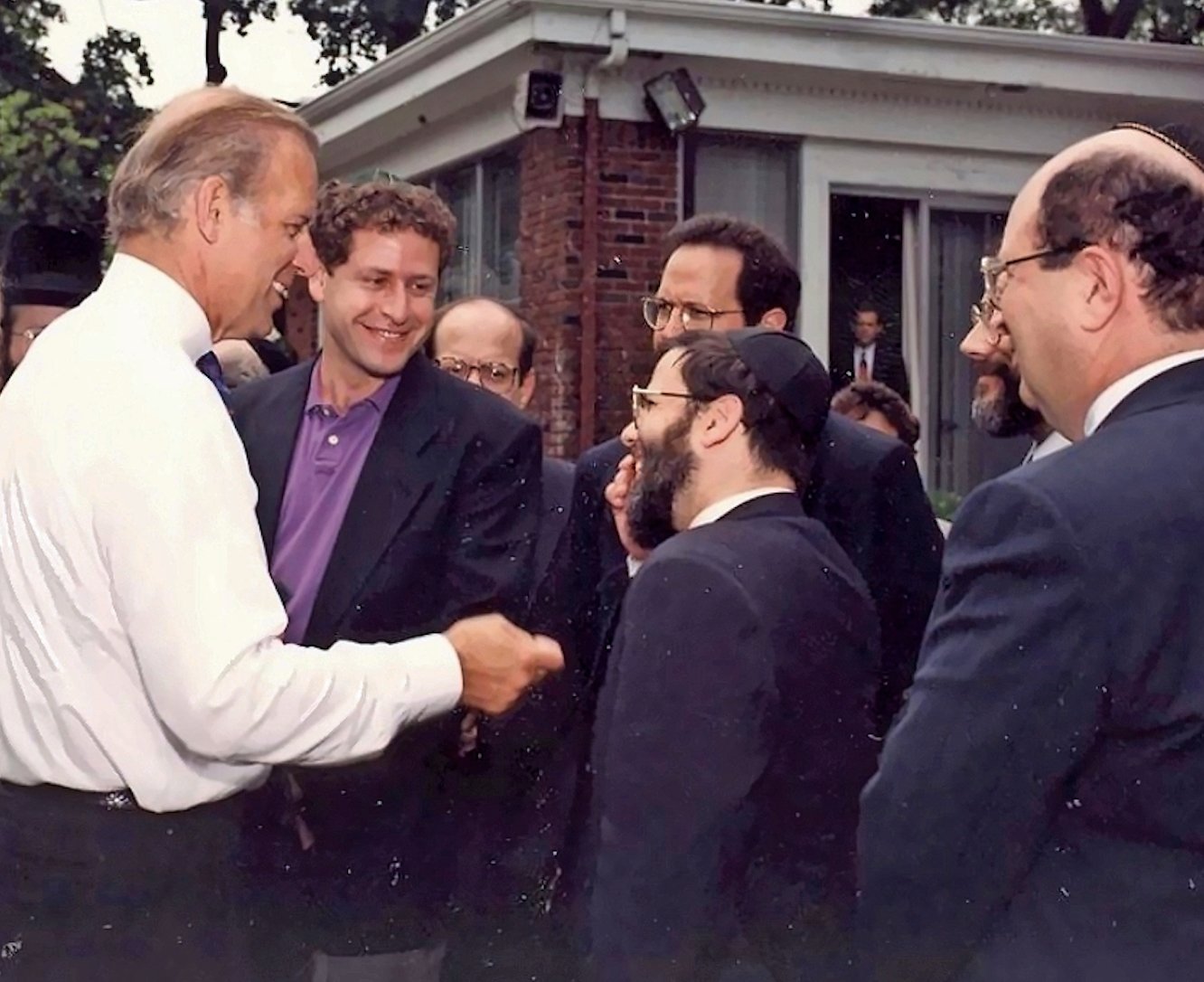 BIDEN IN THE FIVE TOWNS: In 1994, Joe Biden addressed the graduation ceremony of the Yeshiva of South Shore in Hewlett, then attended a fundraiser (above) at the Lawrence home of Martin and Reva Oliner. At the time, Biden, who was inaugurated as America’s 46th president on Wednesday, was chairman of the Senate Judiciary Committee.
From The Jewish Star files

President Joe Biden, in his inaugural address on Wednesday, told a strife-ridden nation that “we must end this uncivil war that pits red against blue, rural vs. urban, conservative vs. liberal.”

Biden said “we can do this if we open our souls instead of hardening our hearts, if we show a little tolerance and humility, and if we’re willing to stand in the other person’s shoes, as my mom would say.”

“Here’s the thing about life,” the 46th president continued. “There’s no accounting for what fate will deal you. Some days you need a hand. There are other days when we’re called to lend a hand. … And if we are this way, our country will be stronger, more prosperous, more ready for the future. And we can still disagree.”

Congratulatory words poured in for the president and for Vice President Kamala Harris.

“I look forward to working with you to further strengthen the US-Israel alliance, to continue expanding peace between Israel and the Arab world and to confront common challenges — chief among them the threat posed by Iran.”

Israel’s President Reuven Rivlin also sent a message congratulating Biden, emphasizing that the ties between Israel and America go beyond political parties and are based on shared values.

“Our region is changing quickly,” he said. “Many of the changes are positive. The recent peace deals between Israel and our neighbors brought new hope with them, and I expect to work with you to help build further bridges in the region, including with our Palestinian neighbors.”

Agudath Israel of America, in a letter to Biden and Harris, said it was “heartened by, and wholeheartedly endorse, your quest for national unity and for healing a troubled and divided America. Please consider us full partners in the pursuit of that noble mission.”

Hadassah the Women’s Zionist Organization of America extended its good cheer, referencing Vice President Kamala Harris, the first woman and the first person of color to hold that office.

“It is with great pride and full hearts that today America has a woman in the White House, serving the American people in the second highest office in the land,” Hadassah declared. “We look forward to working with the Biden Administration on a wide range of issues of importance to Hadassah’s nearly 300,000 members, including enhancing the US-Israel relationship, combating antisemitism at home and abroad, and strengthening women’s rights and women’s health.”

The Simon Wiesenthal Center noted that Biden had taken office at a time of  “grave circumstances now confronting the United States, the world’s greatest bastion of freedom.”

“May the day come soon when … justice will dwell in the wilderness and righteousness return to the fertile fields,” Rabbi Marvin Hier, Wiesenthal Center dead quoted the prophet Isaiah in a prayer. “And may the work of righteousness bring … peace … quietness, and confidence forever.”

Biden referenced the troubling truth-challenged environment in which many Americans have been living.

“Recent weeks and months have taught us a painful lesson. There is truth and there are lies, lies told for power and for profit,” he said. “And each of us has a duty and responsibility, as citizens, as Americans, and especially as leaders, leaders who have pledged to honor our Constitution and protect our nation, to defend the truth and defeat the lies.”

“Folks, this is a time of testing,” Biden continued. “We face an attack on our democracy and on truth, a raging virus, growing inequity, the sting of systemic racism, a climate in crisis, America’s role in the world. Any one of these will be enough to challenge us in profound ways. But the fact is, we face them all at once, presenting this nation with one of the gravest responsibilities we’ve had.

“Now we’re going to be tested. Are we going to step up? All of us?

“It’s time for boldness, for there is so much to do.

“And this is certain, I promise you: We will be judged, you and I, by how we resolve these cascading crises of our era.”