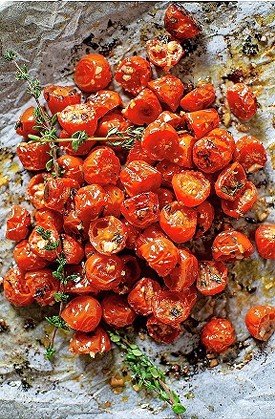 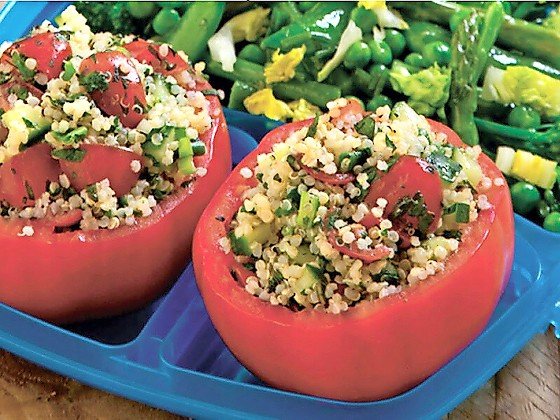 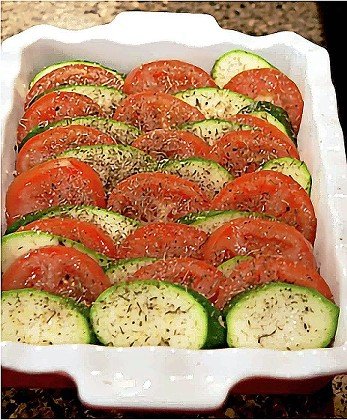 Baked Tomatoes, Zucchini and Herbs
Previous Next
By Joni Schochett

Here in the northeast, early August is the height of tomato season. No matter how we plan our gardens, the heat of August always seems to ripen hundreds at the same time. While there is nothing as luscious as a fresh tomato, warm from the sun, if you have had a bumper crop, you may be looking at hundreds of ripe red-orange tomatoes on your counter top!

My kids learned to love tomatoes while toddlers “helping” me in the huge garden I used to have. We would pick the cherry tomatoes and after a quick dunk in a pail of water, they would eat them like grapes! The small tomatoes were sweet and my kids loved the pop as each one exploded in their mouths. Now my grandchildren love them as well and grew up with cut up tomatoes as a favorite snack starting as soon as they were done with baby foods.

For over 200 years, the tomato was reviled as poisonous and corrupt and so the plant was grown for decoration only! People believes that the plant, which originated in Mesoamerica around 700 CE, was best eaten in the hot areas in which it was native. So the tomato languished in Europe and beyond for centuries.

Finally, the tomato made its way to the New World and by the very early 19th century, after Italy had invented the pizza and seen tomato usage explode, hundreds of recipes showed up in “cookery” books. Today, tomatoes are the number one choice of home gardeners and almost 2 billion tons of tomatoes are grown commercially throughout the world. America grows 3.5 billion pounds annually. The fruit even spawned a sci-fi parody movie, “The Attack of the Killer Tomatoes” and more recently, “The Return of the Killer Tomatoes!”

Besides giving your tomatoes to everyone who comes in the front door, there are only so many tomatoes one can eat in a day or week or month. But, there are many ways to use fresh tomatoes and an easy way to store them for the winter when that taste of fresh tomatoes is just a memory. So enjoy your bounty and the recipes below, and have a great August.

This is a wonderful way to make use of all those extra tomatoes. It keeps them fresh tasting for sauces and recipes all winter long.

Salt and pepper to taste, but use sparingly

Bring a large pot of water to a rolling boil. Wash the tomatoes (use only unblemished fruit). Process only the amount of tomatoes that will fit into the container or freezer bag you are using.

Place the tomatoes in the boiling water for 30 to 60 seconds. Using a slotted spoon, remove them to a bowl of ice water. Let cool. The tomatoes will peel easily. Peel them, cut out the stem end and cut the tomatoes into quarters and then cut the quarters in halves. Save any juice that forms on the plate and pour it into a large bowl. Add a bit of salt and pepper and the minced garlic to the bowl and add the cut tomatoes. Toss to mix well.

Place the tomatoes you’re your container or a zipper type plastic bag. Flatten to remove any excess air and zip shut. Repeat until you have processed all your tomatoes. Freeze the bags as flat as possible. Use as needed for sauces, stews and casseroles throughout the winter.

My family loves these as a side dish with fish.

Cut the top quarter off the tomato and, using a spoon, carefully scoop out the seeds. Place the tomatoes in a well-oiled glass or ceramic casserole dish. Preheat the oven to 350 degrees.

Heat a skillet and add the olive oil. Add the shallots and stir until translucent, about 3 minutes. Add the garlic and sauté another minute. Set aside.

Chop the spinach leaves into small pieces and place in a bowl. Mix in the feta cheese and half the garlic/shallot mixture. You can add the tomato seeds if you like. Add half the breadcrumbs and mix well. Spoon the filling into the tomatoes and pack well.

Add the butter to the skillet and melt over low heat. Turn off the heat. Mix the remaining bread crumbs into the skillet with the remaining shallots and garlic. Add the parmesan cheese, mix quickly to keep the cheese from melting, and spoon over the tomatoes, using the spoon to pack the crumbs gently.

This is delicious on crusty bread or mixed with fresh angel hair pasta and parmesan cheese. The roasted tomatoes caramelize and taste sweet and jammy as they mix with the pasta. You can also add other veggies to the mix for a healthful pasta dinner – more veggies – less pasta!

Line a large rimmed baking sheet with foil and then a sheet of parchment paper. Preheat the oven to 400 degrees.

Wash and dry the tomatoes, cut them in half and place in a large bowl. Add the garlic and olive oil and toss well. Julienne the basil by rolling several leaves tightly together and then cutting the rolls into thin strips. Add to the bowl and toss to blend.

Scrape onto the prepared pan with all the garlic, basil and oil, drizzling the oil evenly over the tomatoes. Try to turn most of the tomatoes cut side up. Place in the oven roast for 20 minutes at 400, reduce the heat to 350 and roast for an additional 30 to 40 minutes until deep golden brown, a bit dried and charred in some places.

Remove from the oven and let cool for 15 to 20 minutes on the pan. Scrape them into a bowl and pour the oil on top. Serve warm with bread or toss with cooked pasta.

NOTE: You can add a sprig of fresh oregano, rosemary or other herbs before roasting.

Cook the bulghur wheat (tabbouleh) according to the directions on your package. When cooked, scrape the wheat into a large bowl and add the mint, parsley, lemon juice, olive oil and salt and pepper. Stir well. Add the garlic, cucumber, cut tomatoes, and scallions, and mix well. Refrigerate. Can be made the day before.

Cut the tops off of the tomatoes and scoop out the seeds. Fill the tomatoes with the tabbouleh and serve. Easy and delicious!

Salt and pepper to taste

Heat a large skillet. Add 2 tablespoons of the oil. Add the garlic and mix for a few seconds. Add the zucchini slices and sauté, 3 to 4 minutes, to soften the zucchini. Set aside.

Slice the tomatoes with a very sharp knife to avoid losing any liquid. Mix the chopped herbs together in a small cup.

Grease a 3- quart glass casserole and place a row of the zucchini at one end of the casserole, like a deck of cards fanned out. Make sure you use all the garlic in the pan.

Place a row of tomatoes overlapping the zucchini and continue to alternate using all the veggies. Sprinkle with the herbs and two tablespoons of the olive oil.

If using, sprinkle the breadcrumbs over the top and drizzle with the remaining olive oil. If using cheese sprinkle with the cheese also. Bake at 350 degrees for 30 minutes. Serves 6 to 10.