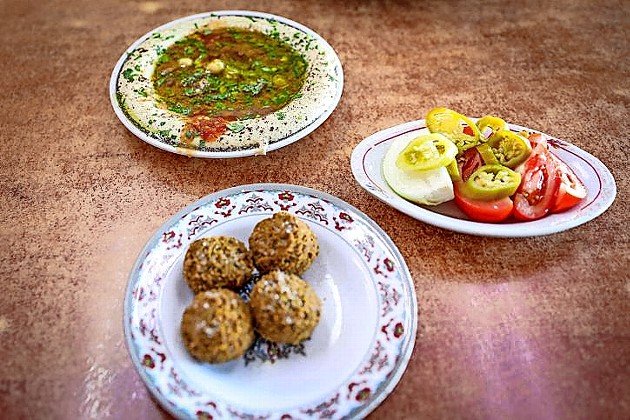 Hummus at a restaurant in the old city of Hebron on Aug. 16.
By Ricki Hollander

One of the most absurd fronts in an ongoing Arab/Palestinian war on Israel’s legitimacy is the fight about food. Israelis are accused of food imperialism (appropriating Palestinian foods), with James Zogby, founder and president of the Arab American Institute, going so far as to call it “cultural genocide” in a 2017 tweet.

This inane offensive over ownership of original recipes as part of a campaign against the Jewish state would not succeed without the assistance of the media. And the New York Times is the latest to join in.

In “Preserving a Palestinian Identity in the Kitchen” (online, Oct. 19; print, Oct. 20), Times contributor Aina J. Khan cites a Franco-Palestinian chef who created a cooking video series “aimed at reclaiming a cuisine that is part of a broader Arab tradition involving foods like hummus, falafel, tabbouleh, fattoush and shawarma that he felt was being co-opted by Israeli cooks.” She features and highlights his outlandish accusations:

“Food is being used to normalize the Israeli occupation by denying the origin of everything from hummus to falafel,” said Kattan. “The images of our grandmother’s hands working in the kitchen, rolling the vine leaves, dipping the bread of the mussakhan in oil,” he added, “These are images of beauty that are being stolen from us.”

That the food angle is just an excuse to expand on the greater theme of an illegitimate Jewish state is soon made clear by the article’s author. She writes:

“Before 1948, when over 750,000 Palestinians were forced from their homes or fled as the state of Israel was created, a mass displacement Palestinians call the nakba or ‘catastrophe,’ about three-quarters of the Palestinian population lived in villages centered around agriculture.”

In fact, Palestinians were displaced not as the result of the establishment of the Jewish state but of the war of aggression launched by Arab armies to annihilate it.

Most estimates of the numbers of Palestinians displaced as a result of this war vary between 500,000 and 600,000, with the vast majority of Arab refugees having fled in advance of the fighting, to escape the fighting, or at the behest of Arab leaders who urged them to temporarily leave their homes during the fighting. Although there were some instances where Arabs were expelled from their homes by Jewish troops during the hostilities, these represented only a small minority.

Khan further emphasizes the theme of Jewish dispossession of Arabs when she writes of large areas near Haifa having been “originally allocated to a putative Arab state by the United Nations in 1947” that “were occupied by Israeli soldiers in 1948 after Arabs rejected the UN [partition] plan. … Many Palestinian families returned to razed homes and slaughtered livestock.”

Again, it was not that Arabs passively rejected the UN plan that led to Israeli soldiers occupying the area, but that they launched an aggressive war, in violation of the UN Charter, besieging Jewish communities and attacking Jewish defense troops.  That property and lives were lost during these hostilities was a direct result of the illegal and ill-conceived attempt by Arab leaders to annihilate the Jewish state.

The New York Times has been increasingly showcasing the claims of anti-Israel activists and promoting their propaganda against the Jewish state, be it under the guise of a film review, and now, cuisine and food preparation. It is yet another entrée into the wholesale delegitimization of the Jewish state, in an attempt to make it more palatable to the general public.

Ricki Hollander is a senior analyst at CAMERA, the Committee for Accuracy in Middle East Reporting in America.