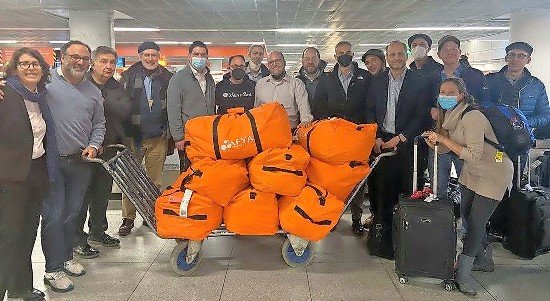 Among 18 Jewish spiritual leaders from who joined a UJA-sponsored mission to the Ukraine border this week, starting fifth from left: Shalom Axelrod of Young Israel of Woodmere, Jeremy Wiederhorn of the New York Board of Rabbis, Steven Exler of the Hebrew Institute of Riverdale, Elie Weinstock of the Jewish Center of Atlantic Beach, Shmuel Ismach of Young Israel of Great Neck, David Schuck, Jonathan Morgenstern of Young Israel of Scarsdale, and Chaim Steinmetz of Congregation Kehilath Jeshurun on the Upper East Side.
UJA-Federation of New York

A coalition of 18 Jewish spiritual leaders representing various denominations on Long Island, in New York City and in Westchester, visited Poland this week to assess the current and future needs of Ukrainians.

The delegation, which arrived in Poland on Sunday, brought urgently needed medical supplies and other aid for vulnerable Ukrainians who remain in Ukraine, as well as for refugees who have fled the country. The trip was organized by UJA-Federation of New York.

The mission began in Warsaw and continued through Tuesday, making stops in Przemsyl (a major transit hub for refugees), Lublin and Srodborow.

Orthodox rabbis who participated were, from Long Island, Shalom Axelrod of Young Israel of Woodmere, Shmuel Ismach of Young Israel of Great Neck, and Elie Weinstock of the Jewish Center of Atlantic Beach; from Riverdale, Steven Exler of the Hebrew Institute of Riverdale; from Westchester, Jonathan Morgenstern of the Young Israel of Scarsdale; and from Manhattan, Shaul Robinson of Lincoln Square Synagogue, and Chaim Steinmetz of Congregation Kehilath Jeshurun on the Upper East Side.

Several participants communicated with their congregants about their experiences.

“In connecting with refugees and those helping support them, I can send the message that as a Jewish community we are with them, we feel their pain, they are not alone, and we are mobilizing to their aid. And to further open my heart, and bring that back to all of you, by bearing witness and helping on the ground,” wrote Rabbi Exler of the Hebrew Institute of Riverdale.

“We bore witness to great displacement, suffering and uncertainty, and we saw so much human heroism and love in action, and we tried … to bring moments of support and strength and connection,” he continued.

The rabbis saw the suffering faces of Ukrainians near the border and, further away, a “more controlled and managed … humanitarian disaster.”

They found “generous-hearted Poles stepping up to find the needs and meet them,” Exler continued. “They are all volunteers [who] acknowledged the fear of burnout and the need to professionalize to sustain these efforts which will need to be ongoing, a message we heard from almost every organization we met.  ‘Please tell your communities back home that we are trying to do whatever we can because we see the need and we must meet it, and please thank them for their support,’ they shared with us.”

“The reality inside this humanitarian center was staggering — it felt like having all the air sucked out of me,” he wrote.

Lincoln Square’s Robinson said the rabbis went to “see for ourselves how agencies on the ground are responding to immediate and ongoing needs of the Ukrainian people.”