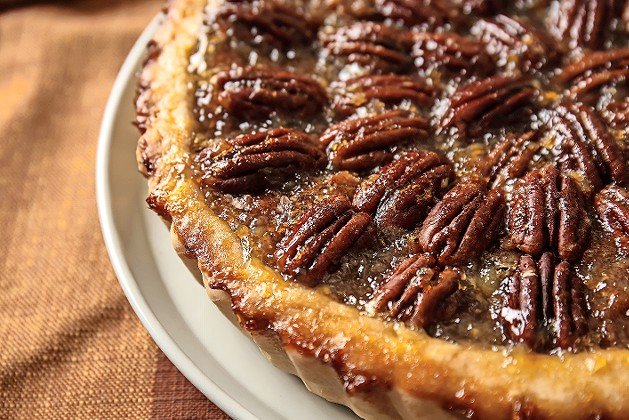 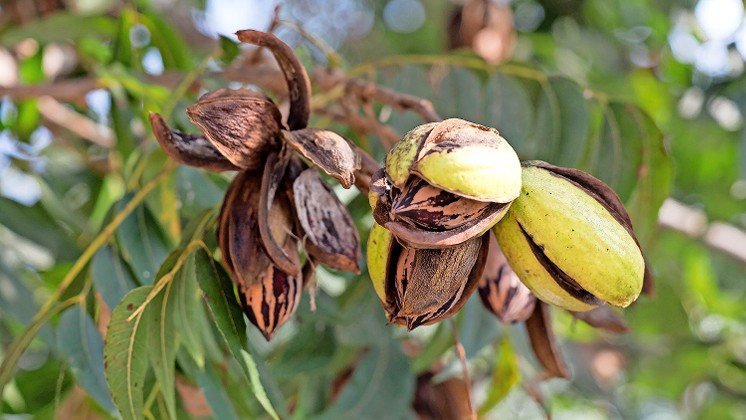 Dried nuts on a peacan tree in Israel.
Previous Next
By Joni Schockett

Thanksgiving is nothing without a pie for dessert and, more often than not, the pie of choice will either be an apple, pumpkin or pecan pie.

Everyone has a favorite recipe for apple pies and many people don’t make a pumpkin pie because a really great pumpkin pie uses dairy products to achieve the creamy consistency. So I thought it would be interesting to find out a bit more about the third most popular Thanksgiving pie in America.

Pecans can be traced back long before people, to their birthplace on the Texas-Mexico border. When people arrived, they actually lived their lives around the cycle of the pecan! Tribes gathered in the river basins at the time of the harvest, lived on the nuts for about four months of the year, left once the trees were emptied and the nuts gone, and then returned the following harvest season.

The Native Americans named their nut “pacane,” meaning “nut to be cracked with a stone.” Besides just eating the nuts, the Native Americans also created an alcoholic drink called “Powcohicora,” from which we get our word, “hickory,” the type of tree related to the pecan tree.

Pecans grew wildly throughout the border region, but the Native Americans began to cultivate the pecan tree around 1600. The new French and Spanish Colonists became enamored of the delicious treat and soon were actively planting and cultivating the trees by the late 1600s, about 70 years before the British colonists.

The first known plantings by these new Americans were in 1772 on Long Island. By the late 1700s the economic potential of pecans was clear to the French and Spanish colonists who lived in the gulf lands; they began to export the nuts to the West Indies and Spain. By the 1800s the British were advertising the importance of these nuts in their newspapers and they began to cultivate their own pecan trees rather than import the nuts from America. Perhaps it was hard feelings over the Revolution.

During those years, the pecan became a very important commercial enterprise for the colonists. They harvested naturally occurring groves and cultivated pecan orchards by planting trees in cleared land. The nuts, however, varied in size, taste, shape, and shell thickness. This was problematic as importers wanted uniform quality. Once in a while, a tree emerged that had large, sweet-tasting nuts with thin shells. This was the desired trait, but no one knew how to ensure that all the nuts would be like the ones from this tree.

In 1882, a man named Abner Landam from South Carolina, found a way to graft these special nut tree buds onto another pecan tree to change the crop of nuts to more resemble the “good” ones. His tedious method was soon forgotten, but in 1876, a freed slave named Antoine successfully propagated a grafted seedling that produced superior large, thin-shelled crops. His clone was named the “Centennial” and won a prize at the Philadelphia Centennial Exposition in 1876. The rest is history.

Antoine soon planted 126 grafted trees and this grove provided parent plants for pecan groves throughout the South. Soon America had a booming export business of uniform, thin-shelled nuts in the southern part of the country.

And finally we get to the pie.

The French settled in New Orleans and it was there that they are credited with creating the pie that still adorns many Thanksgiving tables across America; the Pecan Pie. While there is no known history or record of the pie before the late 1800’s, I imagine that settlers throughout the land were using maple syrup or sugar cane along with the pecans to make a delicious confection even before they recorded the recipe.

Sometime around 1925, Americans learned to make corn syrup and the Karo syrup company created the pecan pie recipe that is so popular today. In fact, the syrup has become so synonymous with pecan pie and many recipes actually use the trademark name “Karo” as the ingredient, something not usually done in recipes.

Today, the pecan pie is consistently in the top 3 favorite Thanksgiving pies in America. There are more than 24million pecan pie recipes on the Internet, but the most common are plain, chocolate and bourbon. While this pie is still most popular in the south and in New Orleans where it first began, pecan pie is fast climbing the popularity ladder in New England and even north into Canada.

So, this Thanksgiving, enjoy a bit of history and enjoy a pecan pie!

•You can make your own pie crusts, but I think it is easier to use Pareve, frozen deep-dish, 9-inch pie crusts for these pies.

I have been making this recipe forever. It is a basic pecan pie that is delicious.

Combine the syrup, sugar butter and vanilla in a mixer and mix well. Add the eggs and mix just until thoroughly blended. Add the melted butter or pareve margarine, if using and mix until blended. Pour half the mixture into each of the pie crusts. Arrange the pecans in any design you like over the top.

Bake at 350 degrees for about 45 to 55 minutes or until the pies jiggle just a bit when moved. The tops will mound and then fall a bit when cooling If the pecans begin to brown too much, place a piece of foil lightly over the top until the pie is done.

This pie is also good with walnuts instead of pecans and, for a dairy treat, some chopped chocolate covered toffee candy mixed with the nuts.

1/2 cup strong cold coffee (I use decaf 2 tsp. per a bit of hot water and then cold)

Preheat the oven to 375 degrees. Place the eggs, molasses, corn syrup, sugar, coffee, margarine and vanilla in the bowl of an electric mixer and mix on low speed until blended. Mix on medium speed for 30 seconds to completely blend.

Place the flour in a small bowl and toss the pecans with the flour. Pour the mixture into the bowl of the electric mixer and mix on low speed until blended. Pour into the unbaked pie shell and place the pie on a foil lined rimmed cookie sheet to catch and spills.

Bake for about 40 to 50 minutes until firm. Cool and then refrigerate. For about 1 to 2 hours.

I first made a maple syrup pie when I ran out of corn syrup and substituted some maple syrup. Then I got a recipe from a Canadian cookbook and then one from Williams Sonoma. This is a compilation of all three. Delicious - and maybe closer to the pie of the early settlers.

Preheat the oven to 375 degrees. Bake the pie crust as directed above. Reduce the oven temp to 350.

While the crust is baking, pour the maple syrup into a small saucepan and bring to a boil. Let simmer slowly and gently so as not to burn the syrup, until the syrup is reduced by 1/2 cup, about 8 to 12 minutes.

Pour the hot syrup CAREFULLY into a heat-proof measuring cup. Syrup should have reduced to 1-1/2 cups. If there is too much, return the syrup to the pan to cook some more. Pour the syrup back into the heat-proof cup and add the brown sugar. Stir to melt the sugar, about 1 minute. Let the syrup cool to room temperature, 45 to 60 minutes.

Pour the syrup/sugar into the bowl of an electric mixer. Add the eggs, vanilla and melted butter or margarine. Mix on low until thoroughly blended. Remove the bowl from the stand and add the nuts. Mix by hand and pour the mixture into the baked pie shell.

Bake at 350 for 40-50 minutes or until the pie puffs and does not jiggle when moved. Let cool.

Preheat the oven to 400 degrees. In a bowl, mix the eggs and the water until well-blended. Add the sugar and mix well. Add the melted margarine and vanilla and mix well.

Place the nuts (and chips if using them) in the pie crust, spreading them evenly over the bottom. Carefully pour the mixture over the nuts until the crust is about 4/5 filled. Discard any remaining mixture or pour into a custard cup and bake with the pie to make a custard.

Bake at 400 degrees for 10 minutes. Reduce heat to 325 and bake for an additional 60-75 minutes until the center jiggles but the sides are firm. Let cool.

Bake the pie crust as directed above and let cool. Place the eggs and egg yolks in a large bowl and whisk until blended. Add the sugars and mix well.

Add the syrups, melted margarine and bourbon and whisk well. Place half the chocolate and half the pecans in the bottom of the pie crust.

Pour the filling into the crust and sprinkle the remaining chocolate and pecans on top. Place on a foil-lined rimmed baking sheet and bake for about 50 to 65 minutes or until set in the center.

Place the first 7 ingredients in a large bowl and whisk to blend thoroughly. The mixture will be a bit thin. Place the nuts and chips in the bottom of their crust and pour the liquid over the nuts.

Place the pie on a foil-lined rimmed baking sheet and bake for about 20 minutes. Reduce the heat to 275 and bake for an additional 20-40 minutes or until just set in the center. Let cool.