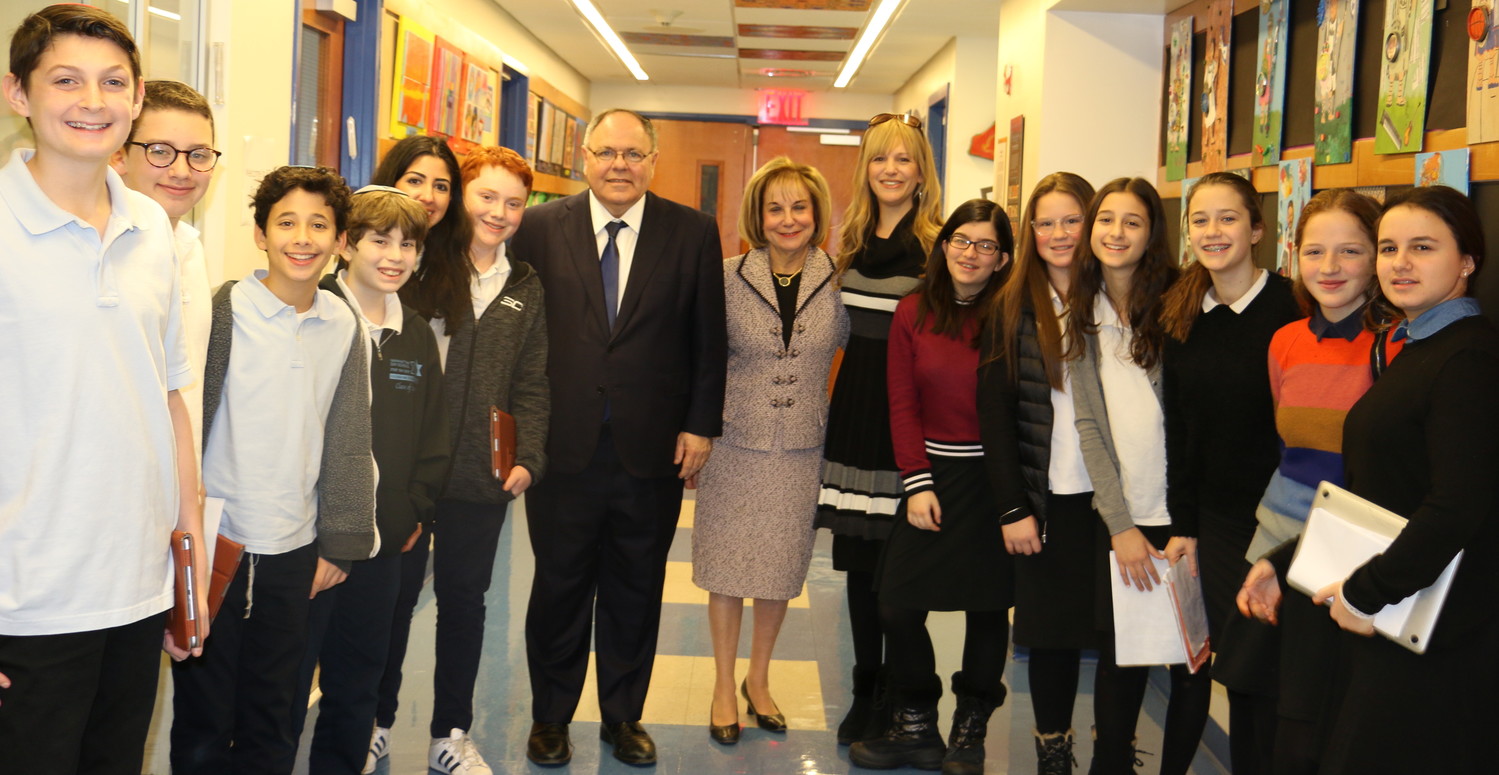 Students on the MDS Stand With Israel advocacy team are pictured with (from left) Ambassador Dani Dayan, Associate Principal Judy Melzer, and Head of School Raizi Chechik. MDS teacher and consultant to Stand With Israel Natacha Lugassy is pictured among the students to the left of the ambassador.

Chanukah celebrations at Manhattan Day School were especially bright this year, thanks to a Dec. 14 visit by Ambassador Dani Dayan, Israel’s consul general in New York. Dayan met with the school’s Israel advocacy team, Stand With Israel, before delivering a powerful talk to seventh and eighth graders.

“Ambassador Dayan’s moving words about the message of Chanukah, the eternal connection of our people to Israel, and Israel in the world today really resonated with our students,” said Head of School Raizi Chechik.

“Ambassador Dayan motivated our MDS Israel advocacy group to educate all who will listen about Israel’s accomplishments and achievements,” commented Judy Melzer, associate principal and Israel Advocacy Program coordinator. Dayan stressed the significance of relaying a positive message about the Jewish state.

The Stand With Israel team’s presentation, titled “An Analysis of Israel: Surviving and Thriving, A Modern Approach to Zionism,” included the Biblical/Religious connection, by Ava Eden and Henya Fortgang; NGOs —  Agenda and Narrative, by Tyler Fischman; BDS — the Campaign against Israel, by Cailey Erber; Hate and the American Campus, by Sophia Heller, Shoshana Horowitz and Leah Roth; Propaganda and the Press, by Max Korenman and Eitan Zomberg; Israel’s Technological and Environmental Advances, by Eitan Weinberg; and Advances in Defense and the World of Medicine, by Avi Herman.

“It was a huge honor, as a proud advocate for our nation’s homeland, to be able to present in front of such an important Israeli figure,” said Ava Eden.

Dayan praised the presentation by Avi Herman and Eitan Weinberg that discussed advances Israel has made in the medical, environmental and technological areas.

“Ambassador Dayan’s speech opened my eyes to the anti-Israel campaigns and how prevalent they are,” said Avi Herman. “It’s amazing how Israel deals with this on a daily basis and always takes the high road. I am so proud of Israel’s behavior.”

The visit encouraged the formation of a new component of Stand With Israel by Agam Ackerman and Danielle Mero, who will research Israel’s ongoing contributions to third world countries.

Dayan connected to the students on a personal level, sharing intimate stories about his years of service to Israel.

After his visit, the ambassador commended MDS students on their leadership and support, tweeting that visiting the Upper West Side elementary school was “the best investment I made today for our future — Thanks Manhattan Day School!”