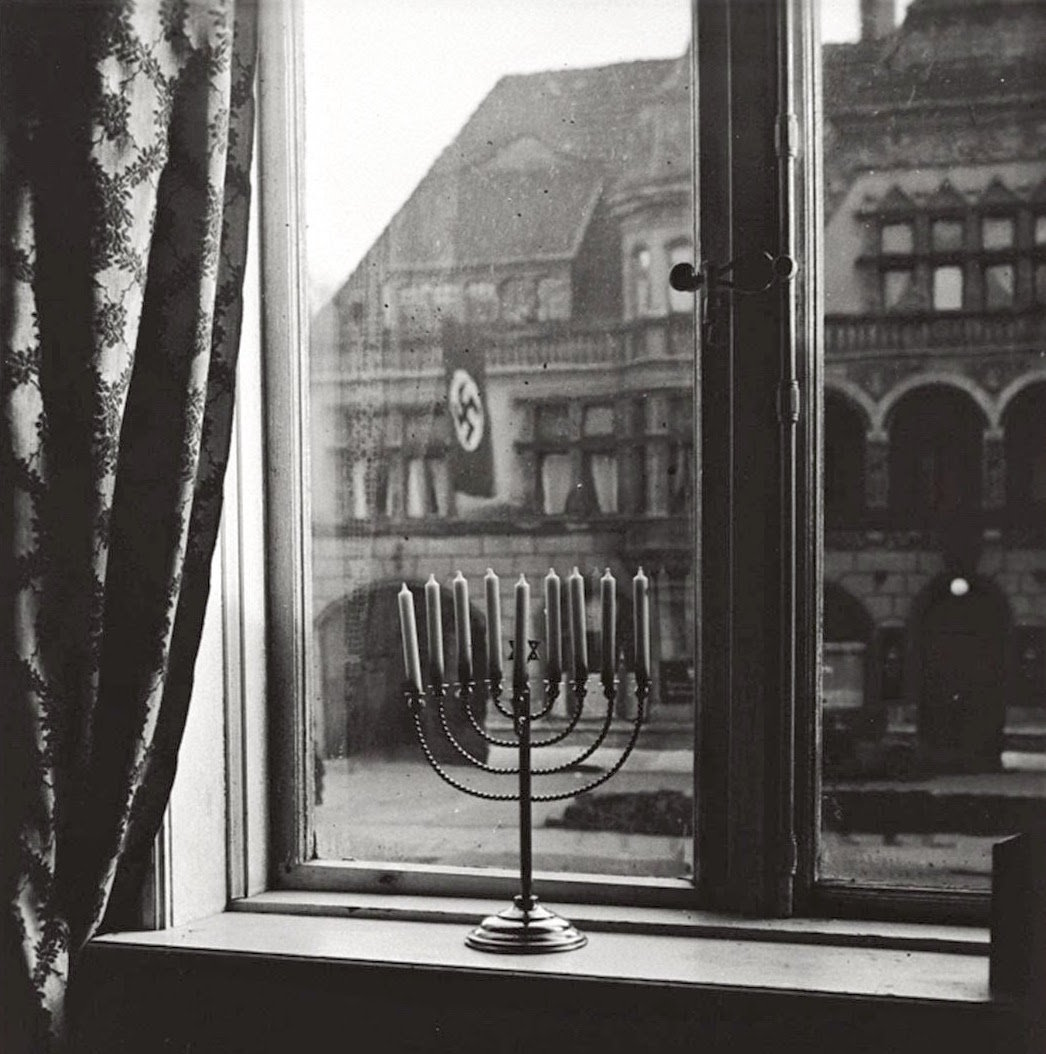 A defiant light against rising darkness.”
By Tehilla R. Goldberg

By now it’s an iconic picture. The one from Kiel, Germany, 1931. Yad Vashem has circulated it for a while; nonetheless, every Chanukah it still touches me.

It was an erev Shabbat, the final, eighth day of Chanukah; hence, a menorah filled with all eight candles. It’s framed by the window of an apartment. Just across the way, in the apartment building facing it, unfurled from another window, is the Nazi flag, stamped with the infamous interlocking black Nazi swastika.

It’s a silent, yet audible, picture, a defiant dialogue of two powerful symbols.

Sometimes, the power of a photo or of a moment is only fully felt in retrospect, after events unfold. This photo is from 1931; the Nazis hand not yet risen to power, but the threat was acutely felt by the woman, Rachel Posner, who snapped the iconic shot. Her husband, Rabbi Dr. Akiva Posner, was the rabbi of the small town of Kiel.

In looping German script, Rachel Posner writes in the back of the photo: “Chanukah, 5692. ‘Judea dies,’ thus says the banner. ‘Judea will live forever,’ thus respond the lights.”

This mysterious time of erev Shabbat twilight is so special, to the point that it is encoded in creation as the time when miracles-to-come were encoded in history-to-come.

While obviously these liminal moments capturing the power of the light of a menorah in contrast to the darkness of Nazism were anything but miraculous, they do seem laden. Not just with the sacredness of erev Shabbat, not just as the glowing light of an eight-candled menorah symbolizing the light of Chanukah in completion, but also of a twilight of historic proportions.

Although not as overt or dramatic as the dialogue of light and darkness that is intertwined in this photo, these silent dialogues are still going on in our own time.

How do we transmit Judaism to the next generation? What is the power of our Jewish rituals and continuity?

In a post modern world where everyone’s story is deemed a “narrative” to the exclusion of the recognition of historic truths, how can the legacy of Judaism be passed on? How do we transmit the powerful legacy of the Maccabees who, against an all-powerful sophisticated Greek narrative like today’s culture of globalization, managed to take a very un-post modern position and stand their ground for the Jewish Torah and the continuity of our Jewish identity in seminal mitzvot such as protecting and observing the sanctity of Shabbat?

Today we take the Jewish traditions of Torah study, Shabbat and circumcision for granted, but in the context of the assimilation the Maccabees were living in, had they not fought and rebelled in order to pass on their Judaism, it could have been lost forever.

In this photo, the symbol of the menorah stands as a defiant and proudly rebellious light against rising darkness. But Chanukah goes beyond kindling the lights of a menorah in defiance of darkness.

With each candle that we kindle, we can focus on a particular tradition or mitzvah with which we assert our Jewish identity, to protect against forces that threaten the continuity of Judaism, even if they are not objective, overt evil, as represented by the Nazi flag. Ultimately, this photo encapsulates the overcoming of both the physical forces of evil that can threaten to annihilate living, breathing Judaism, and the spiritual temptations and erosions that endanger the continuity of Judaism.

With each year of Chanukah and with each flame we light, we are asserting to ourselves how worthy our dedication to Judaism is, how much our challenges and story as a people still lives on in the spirit of the Hasmoneans.

That photo lives on for us as an echo of the defiant Hasmonean spirit from long ago that touched a women in Kiel, Germany in 1931. We can almost touch the proximity of her defiance and continue to pass on our tradition of illuminated, Jewish defiance to all future twilights and generations.