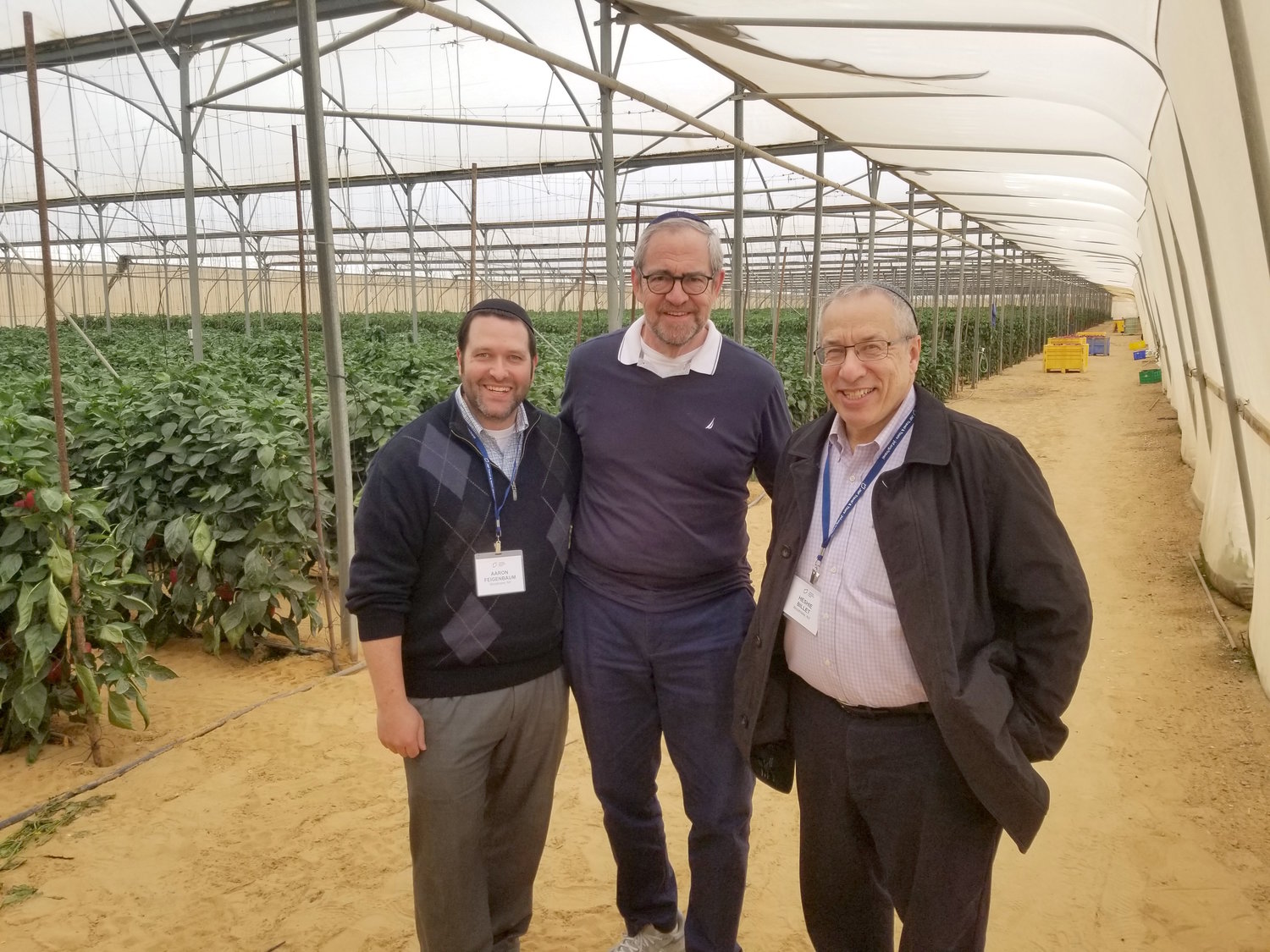 These three Five Towns rabbis visited one of the hundreds of greenhouses of the Halutza Communities along Israel’s Egyptian and Gazan borders, during a Long Island Rabbis for Israel Mission with the Jewish National Fund. Rabbis (from left) Aaron Feigenbaum of the Irving Place Minyan in Woodmere, Kenneth Hain of Congregation Beth Sholom in Lawrence, and Hershel Billet of the Young Israel of Woodmere also planted trees in the Neot Kedumim Biblical Forest, an iconic symbol of JNF’s work over the past century. 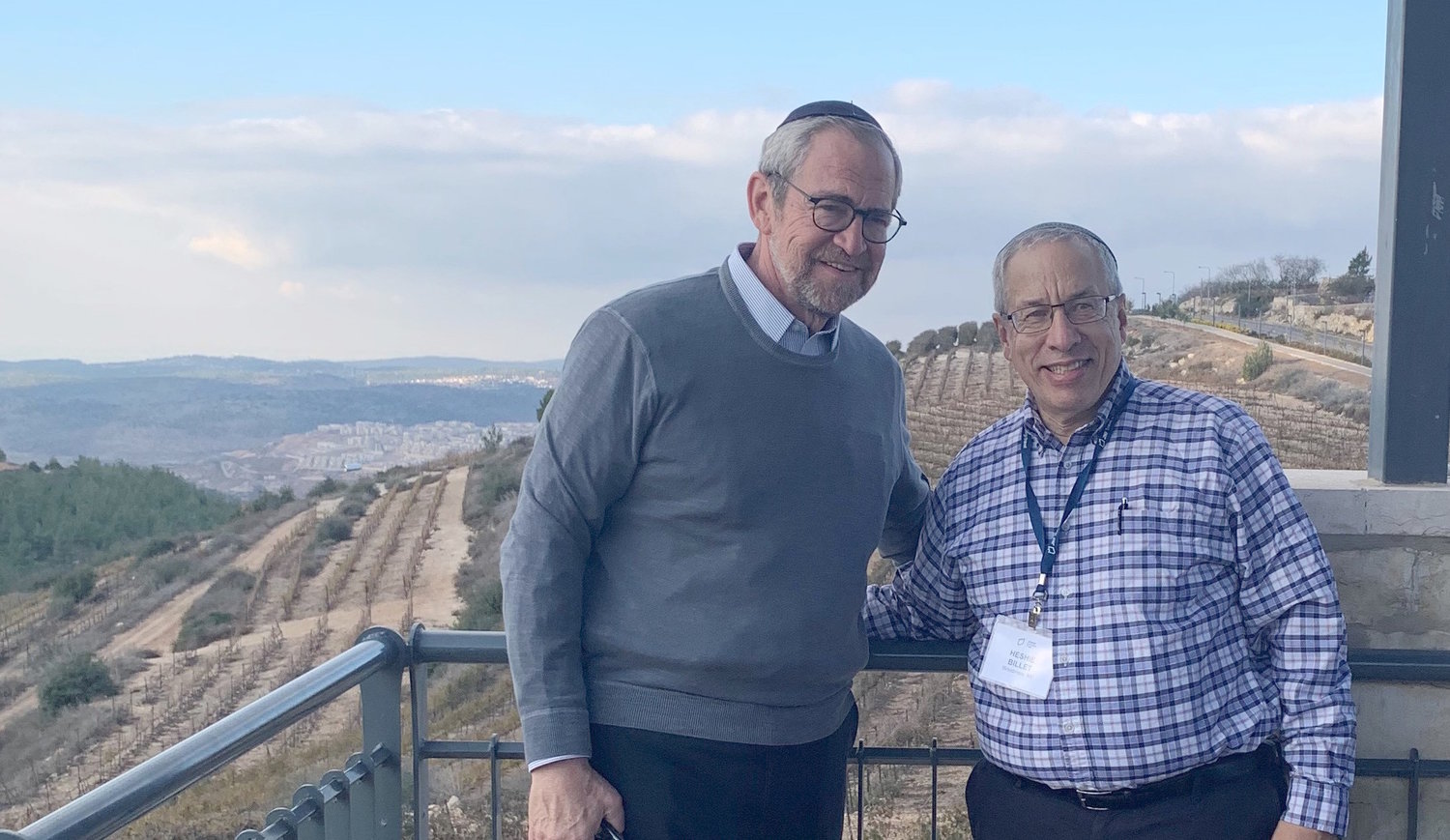 Rabbis Kenneth Hain (left) and Hershel Billet overlook the Judean Hills at the Three Boys Promenade in Gush Etzion, built in memory of the three yeshiva students killed in 2014.
Previous Next
By Eric Narrow, JNF

Israel — the Holy Land, Eretz Zion, the Land of Milk and Honey. It’s a frequent topic of conversation around the Shabbat table, in shuls and on college campuses. Its politics may be polarizing at times, but for the Jewish people, it is ours.

For participants in last week’s Jewish National Fund-USA Long Island Rabbis for Israel Mission, Israel is a symbol of the ongoing saga of the Jewish people, a multicultural, diverse and deeply moving story of our shared values and identity.

Spearheaded by Rabbi Hershel Billet of the Young Israel of Woodmere and Rabbi Kenneth Hain of Congregation Beth Sholom in Lawrence, the mission brought together nine spiritual leaders from both Orthodox and Conservative congregations, for a week of experiential learning and reflection. They viewed today’s Israel through the lens of JNF’s work in building the country’s future.

Rabbi Hain reflected on the responsibility of rabbinic leaders in the realm of Israel education. “How do we present this in a way without pushing religious or Israeli politics? JNF-USA is willing to try to make that balance, rather than be unidimensional in its approach to Israel,” he said.

The JNF mission offered a weeklong dvar Torah on Israel today, told from multiple perspectives, with a wealth of experiences shaping the dialogue throughout the week.

“It’s been great to be here with my colleagues from our community, across denominations, to see our shared support for the Land of Israel,” said Rabbi Aaron Feigenbaum of the Irving Place Minyan in Woodmere. “We all live in close proximity, and we view Judaism differently, but there are areas that we can work together. The kinds of projects we have been seeing are things that we can get behind, to create a stronger sense of cohesion that speaks to all of us.”

While each participant has spent a good deal of time in Israel, the beauty of this trip was that it connected them to the people and communities that are part of Israel’s modern day evolution, many of which were new to the rabbis.

Each of the sites explored are part of JNF-USA’s mandate to serve as the voice of the American Jewish community for the growth and development of Israel.

As part of JNF-USA’s Blueprint Negev campaign to transform Israel’s southern region, JNF-USA identifies and supports the intersection of infrastructural and socioeconomic initiatives that are at the forefront of modern-day Zionism.

Standing along the borders of Gaza and Egypt, the rabbis learned about the ongoing story of Halutza, a small but thriving community built by the pioneers from Gush Katif who were forced to resettle in the Negev following the 2005 disengagement from Gaza. Their inspiring story demonstrates the resiliency and determination of the Jewish nation, as these beautiful agricultural communities have grown over the past 10 years literally out of the sand.

Just north of Halutza, the Aleh Negev Rehabilitation Village near the small town of Ofakim, outside of Beersheba, gave a glimpse into the core values of Jewish philosophy. The 160 residents of Aleh Negev, each of whom have severe disabilities or special needs, live full lives in a desert oasis that also provides over 400 enriching jobs for residents of the Negev regardless of religious, political, or ethnic affiliation.

“This goes beyond the idea of tikun olam. This is an example of Kiddush hashem,” surmised Rabbi Hain, filling him with inspiration and joy at seeing the example the Jewish State sets for the rest of the world.

Within just five packed days, the rabbis gained a deeper understanding of some of Israel’s hidden developments while meeting with pioneers who are leading the Zionist movement of the 21st century.

While much of the program focused on learning and bringing these experiences back to the rabbis’ Long Island communities, it was also a chance for them to impart their American Jewish identity on Israel.

But one thing is for sure — Israel has a true partner in the Long Island Jewish community, and this meaningful connection will only continue to deepen the Jewish identity of all its community members for years to come. As Rabbi Billet put it, “We are the closet community to Israel in the United States — just ten minutes from JFK airport.”