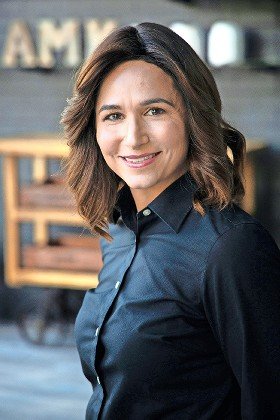 "The Giving Table" author Naomi Ross.
For The Jewish Star

Naomi Ross’ kitchen is her canvas.

Ross — who lives in Woodmere with her husband and four children — has been infusing meaning into the everyday kitchen experience for 19 years, as a cooking instructor and a contributor to Fleishigs, Binah and OU Jewish Action magazines, and Kosher.com.

The Jewish Star’s Kosher Kitchen food columnist, Joni Schochett, called Ross’ just-published debut cookbook “new, enticing, and quite beautiful,” with stories that “are real and beautiful and reflect all the values we want to emulate.”

“I have rarely been as enthusiastic about a new cookbook as I am about ‘The Giving Table’,” Schochett wrote in her column this week.

“Kosher by Design” author Susie Fishbein said Ross “is like your favorite high school teacher whose class you wish you could take again and again. [Her] desire to impart culinary knowledge is baked into every page. Her warm heart weaves the healing effects of food into each chapter.”

Kosher cookbook author Jamie Geller called “The Giving Table” “truly a gift … an inviting and wholesome journey into the warmth of what cooking at home really means.”

In 2003, Ross created “Cooking for Kallahs,” a course for newly married women overwhelmed with their responsibilities in the kitchen. Unlike other cooking classes, “Cooking for Kallahs” combined training in cooking and baking with such integral kitchen management skills as menu planning and Shabbat preparation.

As interest in the program grew, she formed “Cooking Concepts,” expanding her offerings to include men and women in all stages of life, ranging from adolescents to grandmothers.