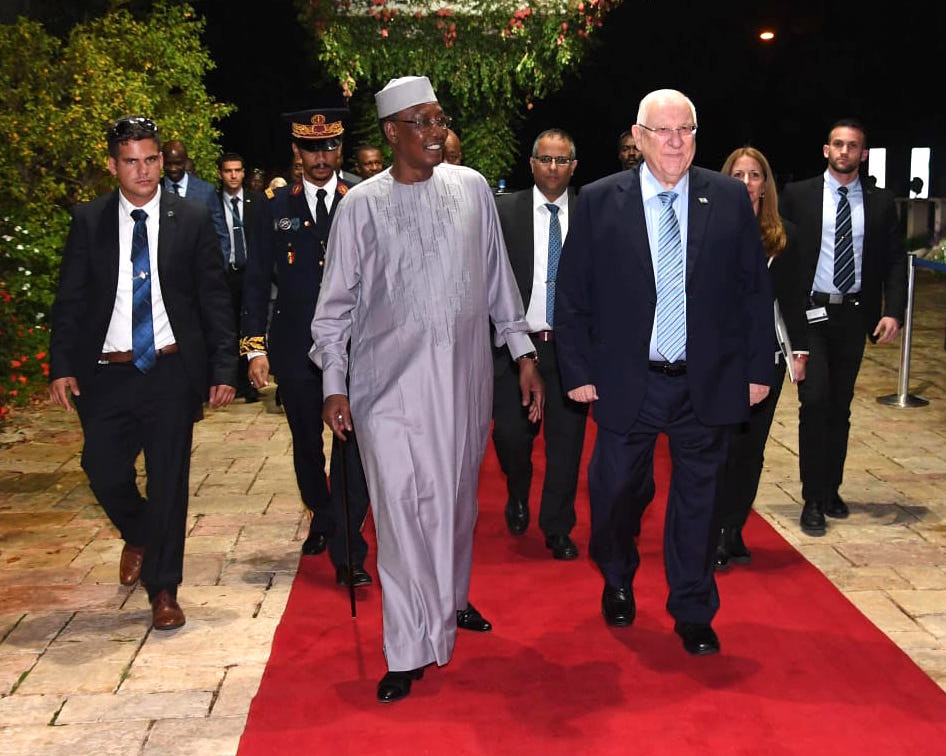 Chadian President Idriss Déby’s historic visit to Israel last month did not occur in a vacuum. It is part of a larger effort by Israel to develop close diplomatic ties with many African countries.

Israeli Prime Minister Benjamin Netanyahu hinted at this when he tweeted, “This visit reflects the revolution we are leading in Israel’s foreign relations. More countries are on the way.”

According to Yonatan Freeman from the political-science department at Hebrew University of Jerusalem, over the last two years, Israel “has increased its relationship with Africa.”

There are a number of reasons for this. First, Africa has many challenges that Israel can solve both in terms of government and the private sector, said Freeman. It also faces water and technical challenges with which Israel, also grappling with similar climates, can offer assistance.

Another reason is that Israel seeks to change anti-Israel voting patterns in international forums, such as the United Nations. “We want to get to those 1.3 billion people,” said Freeman. “In return, we want to get votes.”

The idea behind Israel’s thinking is that there are 54 recognized countries in Africa. The more states Israel can get to vote with it, or at least abstain from votes against it, the less it will come under attack in international arenas.

In addition, Freeman pointed out that Déby recently became president of the African Union, an organization Israel wants to join as an observer. Chad can provide that access.

“Most importantly,” Freeman told JNS, “the fact we have increased ties with Muslim countries proves they are no longer waiting for the solution to the Israeli-Palestinian conflict before they talk to us. In fact, they desire the Israeli solution to their many internal problems. And if there is one country in the world that can prove you can succeed without being dependent on a natural resource and being dependent on our own brains, that’s Israel.”

Diplomacy is in the air, and Israelis should expect practical changes on the ground.

Freeman explained that when Egyptian President Anwar Sadat came to Israel in the fall of 1977, he spoke in the Knesset, toured Beersheva, and that was before the peace agreement with Egypt.

“There’s always a big visit before a big change,” said Freeman. “I think that is what is going to happen with Chad. Netanyahu is going to go over there, and I think they’re going to announce the start of an official diplomatic status between Chad and Israel.”

Freeman speculated that Netanyahu would likely be meeting with Muslim or Arab leaders who will be coming to Chad during his visit. “We might even hear of other diplomatic recognitions, and it may be a chance for others to do that with Israel in Chad,” he added.

Freeman pointed out that “the part Israel will be doing with them, as done with many other countries in the developing world, is help them develop a civil society. The Chadian people will be benefiting since Israel will be helping prop up and increase the democratic and civil society [there]. In the end, the more prosperous Chad is, the more political rights will be extended.”

Omer Dostri, a research fellow at the Jerusalem Institute for Strategic Studies, told JNS, “The president of Chad strictly said in the meeting with Netanyahu that the object of his official visit to Israel is to renew the diplomatic relations between the two countries. It could be assumed that an expression of that objective will be the opening of an Israeli embassy in N’Djamena and a Chadian embassy in Tel Aviv,” although the chance that an Arab Muslim country will open its embassy in Jerusalem is slim.

“Nevertheless,” said Dostri, “the two countries could decide to only open a consulate, at least for the beginning.”

Opposition leaders in Chad have voiced objections to renewed ties, raising questions over whether they can impact Déby’s decision, but according to Dostri, “the opposition’s objections will not have any impact on Israel-Chad relations whatsoever. … Déby is not exactly a democratic ruler. The opposition leaders in Chad have no real voice, and they do not have the political power to influence Déby’s decision.”

Dostri said Israel is well on the way to renewing ties with more African nations.

“Israel already renewed ties with the Republic of Guinea in January 2016 after 49 years. Also in 2016, Netanyahu met Mali President Ibrahim Boubacar Keita at the Economic Community of West African States conference,” where the two leaders agreed on the warming of relations between their respective countries.

“Additionally,” Dostri said, “in the last year there are some reports, including reference from officials in Khartoum, about unofficial relations between Israel and Sudan. It is estimated that Mali and Sudan could be the next African countries to declare diplomatic relations with Israel.”

“Time will tell, but this is just the first part of it, and I think we will see more countries in Africa coming to Israel,” he said. “I foresee more states, even Pakistan, Indonesia or Bangladesh. … I’m looking at a wave of Muslim-majority countries coming to Israel in terms of publicly talking about maintaining good relations even with the [Arab-Israeli] conflict still going on.”