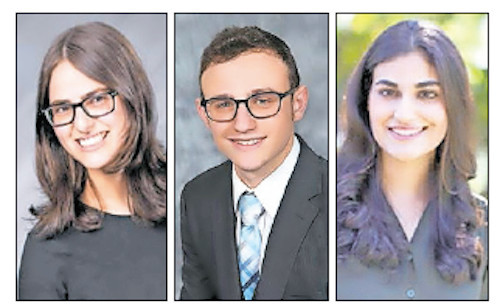 Yeshiva Har Torah’s graduating class of 2013 wasn’t big by the school’s standards, but it punched above its weight in high school. From a class of 46, three students were selected valedictorian or salutatorian at three different high schools in 2017.

Yeshiva Har Torah does not have an affiliated high school so graduates typically go to a range of yeshiva high schools around the metropolitan area.

In addition, the school is located in Little Neck hich is centrally located but does not have a large native Orthodox population of its own. As a result, the school draws students from communities throughout Nassau County and Queens, resulting in unusual diversity for a yeshiva day school.

Ariel hails from West Hempstead, Rachel from Great Neck, and Sophia from Roslyn.

Sophia said she felt that there were “no words to express the tremendous hakarat hatov that I feel towards Yeshiva Har Torah.”

Rabbi Menchel, the principal, expressed pride that so many graduates “continue to distinguish themselves in their respective yeshiva high schools and beyond.”