‘Hitler’s Mufti and the Rise of Radical Islam’ 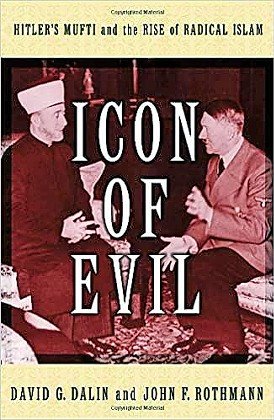 It was the time when there was no State of Israel, before there were Arab refugees, occupied territories and Zionist crimes and criminals. The Kotel, the Old City, the West Bank, Gaza, the Golan Heights and Jerusalem were part of the British Empire and under a particularly strange governance that included a dominant role for Haj Amin al-Husseini. This is his story.

The highest office, governing both Moslem religious and secular affairs in the Holy Land, is called Mufti; in the inter-war years, al-Husseini was to hold this sensitive position and proceed to lay the ideological and programmatic foundations for the holy war and anti-Jewish crusade that would be the hallmark of Middle East conflict for the next century.

The book under review, “Icon of Evil: Hitler’s Mufti and the Rise of Radical Islam” by David Dalin and John Rothmann, is the story of the genesis of that conflict and the man who inspired it.

The Mufti of Jerusalem, and by extension all of Palestine, was to give the political and religious atmosphere of that part of the world a hateful and bigoted polity that predated the Nazis and in effect, anticipated the Nazi ideology by one generation. Zionism and its program for the establishment of a Jewish state in the Holy Land was to become the political and religious target for al-Husseini’s political agenda at eliminating Judaism as a spiritual presence in the Middle East and subsequently in the whole world. How that was to be achieved is what al-Husseini was all about.

“Icon of Evil,” published by Random House in 2008, deals with an era that was to foreshadow a century filled with hate and murder on a scale unheard of in human history. At the center of this tragedy was the attempt to eliminate the Jewish people.

The first personality to attempt this despoiling of the Jewish people was al-Husseini, who, together with his cohorts, set the pattern for what was to morph into mass genocide. Consider the following litany of horror that filled the pages of 20th century history with the blood and smoke that was to be its signature.

It was al-Husseini who instigated and led the murderous Arab uprisings starting in 1920, 1939 and 1936 in all the major holy cities of Israel, including Jerusalem and Hebron. These uprisings and their murderous outcomes were to establish the pattern of plunder and murder that would serve as the model for the intifadas conducted later that century. It was al-Husseini who was to openly collaborate with Hitler and helped fuel the plans for genocide of the Jewish people so as to halt their aliyah to Israel, all of which is fully documented in this book.

It was al-Husseini who personally visited the Auschwitz death camp, incognito, together with Adolph Eichmann, to witness firsthand the execution of the Holocaust, something he was to write and gloat about. This fact fascinates me, given the penchant for many contemporary Moslem leaders to downplay or outright deny the reality of the Holocaust.

The Mufti is their role model and it behooves all people of good will to remind the modern day Islamo-Fascists of his active and open role in encouraging the Holocaust. It was the Mufti who personally introduced European-style anti-Semitism into the Middle East by promoting the translation and publication of the “Protocols of the Elders of Zion” and Hitler’s “Mein Kampf.”

Furthermore, it was the Mufti who was directly responsible for the establishment of a Moslem Waffen SS unit that massacred 90 percent of Bosnian Jewry. All the above predated the State of Israel and defies all the reasoning behind the radical Islamic stance against the Jewish state and its people. The Mufti’s activities throughout his life put to shame those who found fault with whatever policies the State of Israel followed at self-preservation. It was al-Husseini’s post war relationships with Arab luminaries such as the radical Islamist Sayyid Qutb, Yasser Arafat, a distant relative and secular successor, and Iraq’s Gen. Khairallah. Talfah, an uncle to Saddam Hussein, helped vault his hateful policies into the mainstream and set the tone for all that was to follow to this day. Indeed, it can truly be said that, based on the facts detailed in the book, al-Husseini’s actions and writings serve as the inspiration to the current leaders of Hamas, Hezbollah and al-Qaeda, among other terror organizations.

This mindset is relevant today when one considers that the current head of the Palestinian Authority, Mahmoud Abbas, earned his doctorate based on the premise of Holocaust denial. The irony here is that this man occupies a secular position previously held by al-Husseini, who personally participated in the Holocaust. A double irony is that Abbas earned this doctorate from an institution, the Moscow Oriental College in 1983, a communist-run institution that would hardly give credence to Holocaust denial if it did not fit communist interests at that time. It should be noted that it was the Soviet Union that bragged for many years that it took the lead, militarily and politically, in ending the Holocaust. How an educational institution dominated by communism passes favorably upon a Ph.D dissertation whose basic premise is Holocaust denial defies logic. Jewish leaders and other people of goodwill should take note of this when dealing with Abbas and his kind.

An additional feature of the book is the extensive treatment given to speculation on what would have resulted if the Nazis had conquered the Middle East and Israel. There is also the attempt by the Mufti to get the Nazis to launch a massive air attack upon Tel Aviv and Jerusalem’s Jewish neighborhoods. This brazen behavior puts to a lie the Islamic claim that the premise of their opposition to the state is anti-Zionism and not anti-Semitism. Given the tone of this time of year on the Jewish calendar, a reading of this book is most appropriate. The personalities of tyranny who attempted to destroy our faith and people deserve close study. From their actions, we can learn to better identify and cope with future tyrants who wish us ill. And of those, unfortunately, there is no shortage.