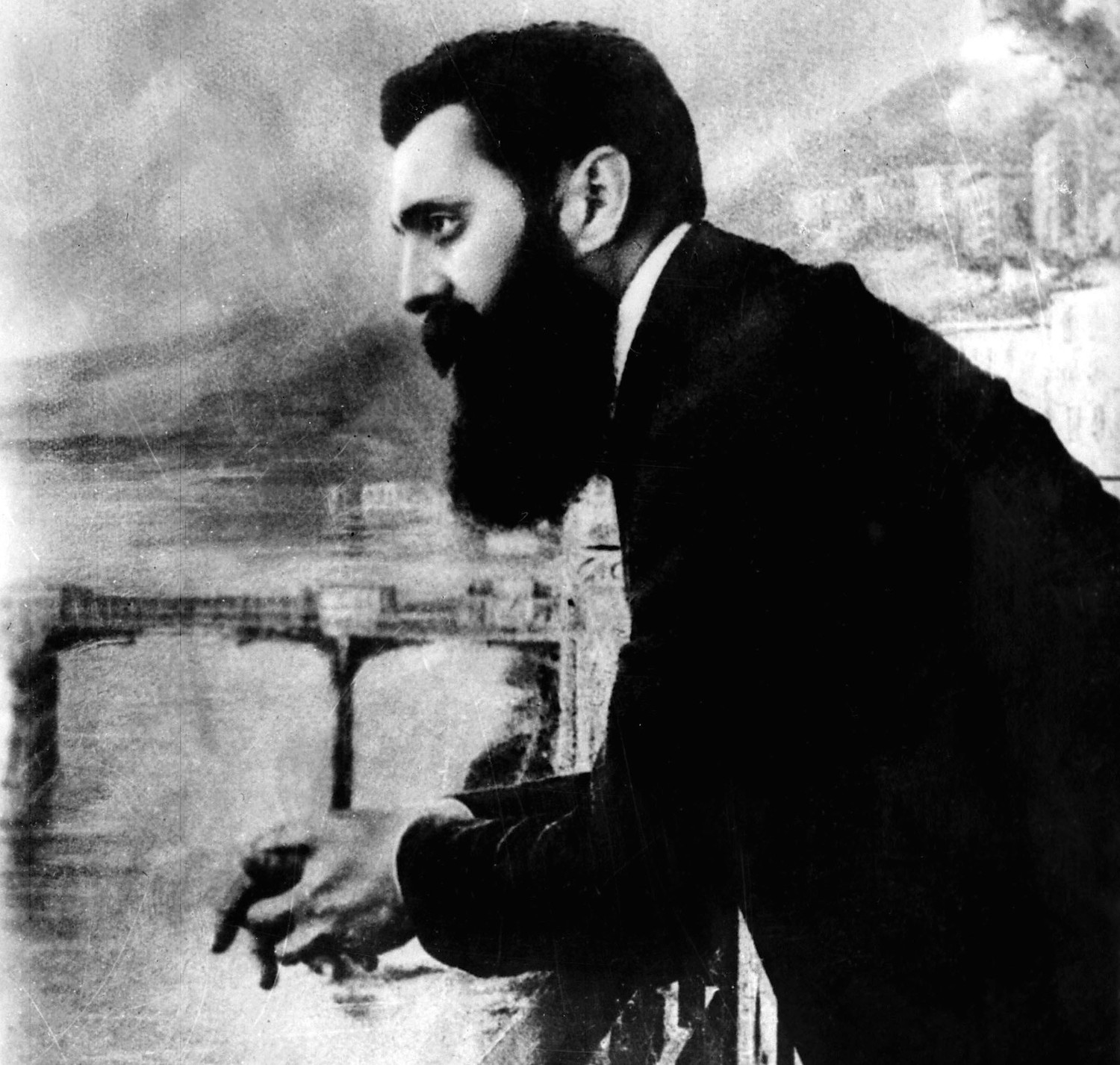 Theodor Herzl has been with me my whole life.

I know that is an odd statement from a Canadian who has lived his entire life in Toronto. I am not related to Herzl and, of course, I never met him.

My earliest memory of Herzl is of a family visit to his grave in Jerusalem in 1966. I co-wrote and performed in a play about him when I was in seventh grade and organized Herzl-related programming at summer camps in Ontario. When I go to Israel, I revisit his grave to pay my respects.

I celebrated my 50th birthday in Basel at the Three Kings Hotel, the site of the balcony on which the most famous picture of Herzl was taken (seen at left). My wife Leanne and I celebrated our 25th wedding anniversary at the Hotel Castille in Paris, where Herzl wrote “The Jewish State” in 1895.

I have been collecting Herzl memorabilia for over 30 years. While people ask me many questions about the collection, I know they are all thinking: Why? What’s the point? Who cares?

These are good questions.

I believe there is much we can learn from Herzl. He believed that we are not trapped in the conditions in which we find ourselves, that things can be improved and tomorrow can be better, that anything is possible.

This is a universal message. It speaks to all people, not just Jews. Since Herzl’s dream of a Jewish state came true, everyone else’s can as well.

Herzl was aware of this universality. It is best illustrated in his 1902 book Altneuland(Old-New Land). One of his characters says, “There is still one other question arising out of the disaster of nations which remains unsolved to this day, and whose profound tragedy only a Jew can comprehend. This is the African question. Just call to mind all those terrible episodes of the slave trade, of human beings who, merely because they were black, were stolen like cattle, taken prisoner, captured and sold. Their children grew up in strange lands, the objects of contempt and hostility because their complexions were different.”

This is remarkable. While dedicating his life to the Jewish people, Herzl also wanted to help end black suffering. He understood that we are only free if we are all free.

Although North Lawndale is now a predominantly black neighborhood, the name was not changed. The Theodor Herzl School of Excellence remains in operation, with 500 scholars from kindergarten to eighth grade. The scholars wear uniforms with “Herzl” on them, the sports teams are called the Herzl Bears and the students dedicate a unit of study to learning about Herzl.

In the auditorium of the Herzl School there are several images. On one wall is a portrait of Herzl next to one of former President Barack Obama. On the other wall is a large portrait of Martin Luther King, Jr.

In 1966, King moved with his family to North Lawndale and lived in a third-floor apartment two blocks from the Herzl School. From there, he launched what he called the “action phase” of his agenda. In the ethos of the Herzl School, the similarities between Herzl and King are highlighted.

Both men believed in the power of dreams. King famously said, “I have a dream,” while Herzl’s motto was “If you will it, it is no dream.” They believed in a better future for their people and dedicated themselves to creating it. They advocated publicly for their ideas, and suffered and sacrificed greatly on their behalf.

The Herzl School has brought the Jewish and black communities together. Congregants of Temple Beth Israel of Skokie annually provide Christmas presents to all Herzl School scholars. The institutions’ students have shared group experiences. The Israeli Consulate in Chicago has an ongoing relationship with the school and school principal Tamara Davis has participated in programs organized by the Herzl Center in Jerusalem and the American Zionist Movement. The Chairman of the World Zionist Organization, Yaacov Hagoel, visited the school in Dec. 2022.

We often focus on the things that make us different, but all people want a better future. When we are faced with a decision as to whether to take action to create that future or to remain passive, it is useful to ask ourselves, “What would Herzl do?” The answer is always the same: Herzl would act. It is when ideas are coupled with action that change happens.

So, why the collection? Because Herzl is relevant. His life serves as an example to us. My collection is a reminder that we all can change things, including ourselves.

What is the point? The point is that there is much to learn from Herzl. He challenges us not to be satisfied simply because our people’s dream came true, but to help the dreams of others come true.

David Matlow is a Toronto-based lawyer who is chair of the Ontario Jewish Archives and a member of the board of the iCenter for Israel Education.