He brought the Torah to a L.I. midbar 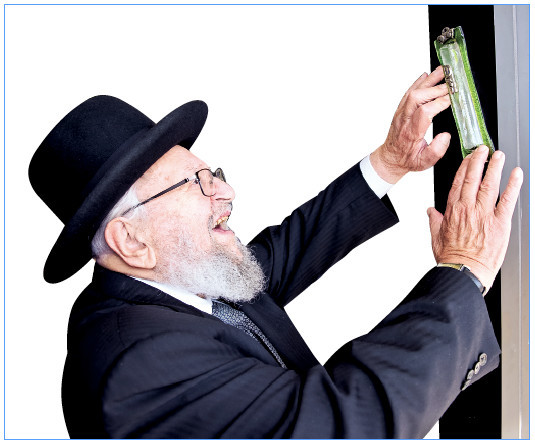 Rav Kamenetzky affixed a mizuzah at the 2015 grand opening of Gourmet Glatt in Woodmere. As the number of observant Jews grew, the number of kosher markets grew as well.
The Jewish Star

Harav Binyomin Kamenetzky, a pioneer in the establishment and growth of Orthodox Judaism in the Five Towns, was niftar on erev Shabbos. Thousands attended his levaya on Sunday at the Yeshiva of South Shore. He was 93.

The eldest son of Harav Yaakov Kamenetzky, zt”l, Rav Kamenetzky was a founder of YOSS as well as TAG (Torah Academy for Girls), the Young Israel of Woodmere and many other institutions. He touched more lives than can be imagined.

While serving as a rebbi in Yeshiva Toras Chaim in East New York, he encountered a child who was travelling there from Cedarhurst. When he realized that the South Shore lacked the institutions of Yiddishkeit, he and his rebbetzin, with the encouragement of his father, moved there in 1956 and began building a Torah-true community.

At the levaya for Rebbetzin Tzirel Kamenetzky, a”h, in 2015, Rav Kamenetzky recalled that after the couple moved to the Five Towns, any thought of returning to the more familiar and yiddishe Brooklyn was pushed aside with the knowledge that “the Torah was given in the midbar [and we] have an obligation” to bring Torah to a place where it was lacking. This was a theme echoed frequently at his levaya.

More on the life of Rav Kamenetzky, and special tributes, in next week’s edition.