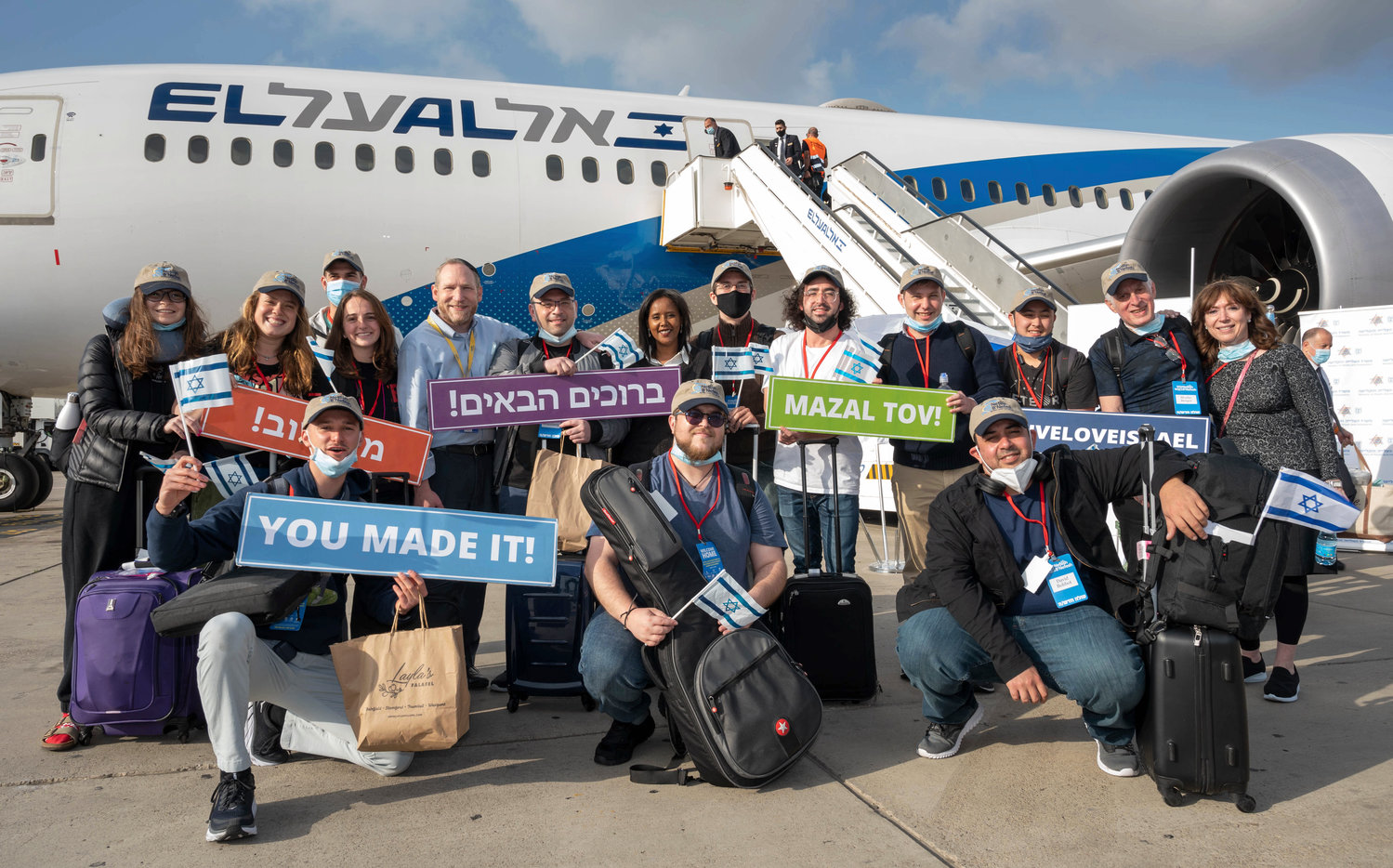 Some of Monday’s 104 oilm with Rabbi Yehoshua Fass of NBN and MK Pnina Tamano-Shata, minister of Aliyah and Integration.
NBN/Shaha Azran

Israel welcomed 104 olim from North America on Monday, as the Jewish state continues to loosen its barriers to international travel.

The gates were never really shut for those making aliyah, however. Nefesh B’Nefesh reports that since the beginning of April 2020, more than 3,500 North Americans have made aliyah.

This week’s group arrived at Ben Gurion Airport on a chartered flight from JFK organized by NBN in cooperation with the Israeli Aliyah and Integration Ministry, the Jewish Agency, Keren Kayemetl LeIsrael (KKL) and Jewish National Fund-USA.

The group included 28 families, 18 singles and 27 retirees — the eldest of whom is 98 and the youngest four months old — from nine states. Among the olim were people from Far Rockaway, Forest Hills, Brooklyn, Teaneck and Englewood.

The olim plan to settle throughout the country. Thirty-five are making the move as part of the NBN-KKL “Go Beyond” program, which provides enhanced aliyah packages and increased services to new immigrants moving to the Israel’s northern and southern frontiers, as well as to Jerusalem.

“Since the beginning of the pandemic, despite all the challenges and uncertainty, interest in aliyah has continued to rise,” said Rabbi Yehoshua Fass, NBN co-founder and executive director.

The new olim have shown “incredible resilience in the face of delayed dreams,” he said, and “continue to inspire us with their commitment to the Zionist dream of living in Israel.”

NBN reports that 8,100 aliyah applications were been submitted during the COVID-19 year, and more than 17,000 people have contacted the organization for information about immigrating to Israel.

“Despite these challenging times, we are doing our utmost to expedite aliyah from around the world,” said Israel’s Aliyah and Integration Minister Pnina Tamano-Shata.

Jewish Agency Chairman Isaac Herzog added, “Despite the significant travel restrictions during the pandemic, we’ve succeeded in bringing tens of thousands of Jews home to Israel, proving that nothing can stop aliyah.”

This week’s flight followed all of the guidelines set out by the Ministry of Health, with olim producing negative PCR coronavirus tests prior to arrival. The olim will undergo mandatory quarantine in Israel.