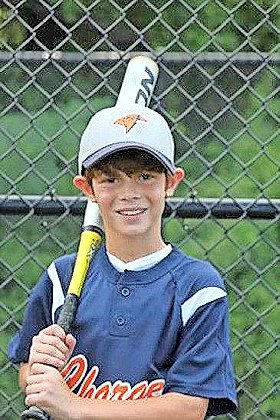 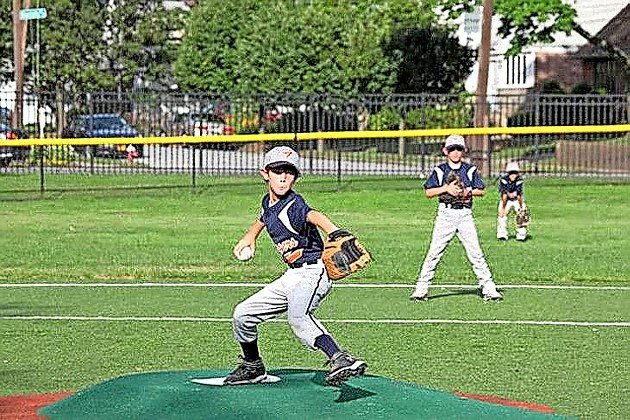 Jacob Steinmetz on the mound in 2012 was featured in The Jewish Star.
Previous Next
By Karen C. Green

With a batting average of .415, on-base percent of .642 and an ERA of 3.2, you’d say this player is heading for the big leagues. He is, but he’s also heading to 4th grade — at HALB. At just 4’8” Jacob Steinmetz, 9, of Woodmere, has played baseball locally since he was in kindergarten.

He got his start playing with the Young Israel of Woodmere team in the shul league, and then moved onto the Hewlett-Woodmere District league, where he just finished his fourth season. As his level of playing continued to escalate, Jacob at age 7, with the support of his father, tried out for a travel team, the Long Island Chargers, and scored a place on the team.

And he’s not only scoring hits on the team, which just won the National Junior Baseball League 9U level championship, but he’s earning high marks with his coach Rob Gaertner of Wantagh, who has made accommodations for their only Shomer Shabbos and Jewish player. “He’s the youngest boy on the team, and he’s playing kids two years older. He’s a good little ball player. I saw that in him. He’s got an incredible passion for the game. Jacob’s my starting centerfield. He’s very coachable and he’s always the first one there at games and practice. After every game he always comes to me and says thank you. He’s a good little boy. We’re very happy to make arrangements for his religious needs. We had one tournament on a Saturday and he and his Dad walked two miles to get there.“

Elliot Steinmetz, Jacob’s father, expresses how the experience is so rewarding beyond the ball field. “With the exception of tournaments, the team scheduled all games around Jacob, on Sundays and weeknights. The parents of his teammates have been wonderful. They ask questions as to whether certain food is kosher. It’s brought a real sense of cultural awareness to all.”

Richie Kahn, Jacob’s coach of two years at Hewlett-Woodmere District league describes him as “one of my top players since second grade. He’s very enthusiastic, and has a great desire to play. More than anything is his incredible sportsmanship. It’s a pleasure to coach him.”

He may have baseball on the brain, but it hasn’t come at the expense of his schoolwork. He’s an excellent student, remarked Jacob’s father. When he’s not playing or doing school work, he’s rooting for his team, the Yankees. He’s confident that with the help of his favorite player, Derek Jeter, New York fans will be watching baseball in October, and cheering them to another World Series victory.