Why did police turn their backs? 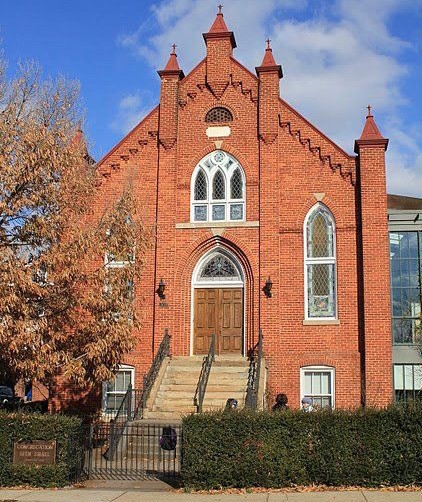 Charlottesville’s Congregation Beth Israel. As three white supremacists with semi-automatic weapons stood across from the synagogue, congregants recently left through the back door.
Pinterest
By Abraham H. Miller

Jews are asking if we’re back in the 1920s. To me, the scene outside a Charlottesville synagogue is more like Odessa in 1905.

Across from the synagogue stood three white supremacists with semi-automatic weapons. During the Friday night torchlight parade that passed the synagogue, the alt-right marchers, hands in the salute formation, hurled slogans reminiscent of the Nazi era. The armed men in fatigues looked as if they were ready to carry out the threats.

The police were called. They did not show. Did the city council want blood spilled to advance an agenda?

We are told by one distraught police officer that the police were told to let the two groups of demonstrators have contact with each other and then stand down—a scenario designed for chaos and crafted outrage. Although this is from an anonymous source, video footage of the event posted by the Virginia ACLU shows just that. The Virginia ACLU repeated on Twitter that the police were told to stand down.

Inside the synagogue, the rabbi and the congregation were helpless. If the neo-Nazis, KKK members and other white supremacists entered the synagogue, they might have slaughtered all the worshippers before the first police car could arrive at the scene.

The congregants left through the back door, and were told to walk in groups instead of dispersing. In fact, a group only provides more targets in close proximity. The congregants have a lot to learn.

But what does this have to do with Odessa in 1905? Odessa was the scene of the bloodiest pogrom to take place in Russia, whose Jews sustained a long series of brutal massacres. Although many Jews (estimates vary from 400 to 2,000) died in the Odessa pogrom of 1905, the Jews had created organized, armed militias and fought back, taking a toll on police and soldiers who were actively involved in the pogrom, along with the Okhrana, the czarist secret police.

Two Russian Jews who took special note of the Odessa pogrom were Ze’ev Jabotinsky and Joseph Trumpeldor. Jabotinsky, at the time, was a leading Russian-Jewish intellectual. Trumpeldor was a decorated military hero who lost an arm in the Russo-Japanese War.

Influenced by the events in Odessa, the two set about to create Jewish, teaching the repelled pogromists that pitchforks, torches and knives were no match for trained and disciplined men with guns. Jabotinsky and Trumpeldor left their mark through the fact that the Russians learned killing Jews just wasn’t what it used to be.

Surviving pogroms in Charlottesville isn’t very different from surviving them in Odessa.

If Jews want to survive, they need to arm and train themselves. Their other option? Walking out the back door of the synagogue and praying white supremacists don’t shoot them as they gather together in groups to make themselves easier targets. Or better yet, Jews can stay home where it is safe.

Those are the choices. Remember, the police never showed, and the average police response time in the nation is 11 minutes when they do arrive.

When a gun-toting hate group showed up outside a mosque in Texas, they were met by armed congregants who greatly outnumbered them. Nobody walked out the back door of the mosque that day.

During the turmoil of the civil rights era in Louisiana, the Deacons for Defense, made up of veterans, armed themselves to protect young civil rights workers from the savagery of KKK violence. The Deacons also protected blacks who wanted to register to vote.

Unprotected by the Los Angeles Police during the Rodney King riots, Korean business owners organized and defended their businesses with guns.

Yes, it is America in 2017. But for Jews, it’s beginning to look like Russia during the era of the pogroms. Jews need to learn from their own tragic history and from other ethnic groups that acted to defend themselves. Walking out the back door of a synagogue should never be the recommended option. Jews being told to walk in groups is the stuff of nightmares.

Abraham H. Miller is an emeritus professor of political science, University of Cincinnati, and a distinguished fellow with the Haym Salomon Center. Follow him on Twitter: @salomoncenter.