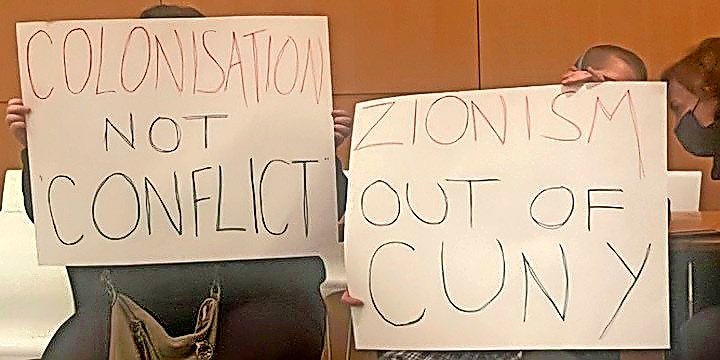 Anti-Zionist protestors disrupt an event at the CUNY Graduate Center.
StopAntisemitism via Twitter

As if to confirm its reputation as an institution stewing in radical anti-Zionism, anti-Israelism and antisemitism, members of CUNY4Palestine and other activists did their best to disrupt and shut down a Dec. 8 panel discussion titled “A Conversation on the Language of the Israeli-Palestinian Conflict,” held at the City University of New York Graduate Center.

The panelists were speaking about how language used by students and faculty in discussing the Israeli-Palestinian conflict has been contorted, redefined, and weaponized as part of the cognitive war against Israel. They were building upon a theory they had substantively explored, along with several other academics, in a special issue of the journal Israel Studies entitled “Word Crimes: Reclaiming the Language of the Israeli-Palestinian Conflict.”

No sooner had the panel discussion kicked off than CUNY’s brownshirts started screaming and chanting at the panelists. They held placards using some of the very words that were examined in the journal, among them “apartheid,” “colonialism,” “settlers” and “occupation.”

In texts CUNY4Palestine published to bring anti-Israel students to the event, the group claimed that the panel only “diverts attention away from the violent oppression of Palestinians” and that discussions about the issue were, in their view, irrelevant. They stated that it was “our conviction that there are no ‘conversations’ between the oppressed and the oppressor.” They added, “This is not a conflict. This is settler colonialism and apartheid.”

Of course, examining the misuse of those words was the very purpose of the panel, whose members were Miriam Elman, executive director of the Academic Engagement Network; Donna Robinson Divine, professor of Jewish studies at Smith College; and Dr. Asaf Romirowsky, executive director of Scholars for Peace in the Middle East.

But the activists had already determined that they had the high moral ground and thus the right to suppress any pro-Israel speech, even by a panel of professors with a deep understanding of the Middle East.

This rude and unacceptable behavior on the part of these activists is not surprising. A 2017 national survey of 1,500 undergraduate students at four-year colleges and universities asked whether it would be acceptable for students to shout down and disrupt a speech by a “very controversial speaker … known for making offensive and hurtful statements.” A full 51 percent of those polled agreed that shutting down such speech with the “heckler’s veto” would be justified.

Even more troubling, respondents were asked if they believed in using violence to interfere with and shut down the controversial speaker’s appearance. Astonishingly, 19 percent of students answered in the affirmative.

The “heckler’s veto,” of course, is an unethical tactic reminiscent of the worst totalitarian regimes, including Nazi Germany. It is intended to silence anyone who might question the activists’ party line. Moreover, campus speakers are guests of the entire school. A few self-selected students have no right to censor speakers and decide — in advance — that their fellow students should not hear them.

Speakers who have been shouted down and prevented from speaking are usually highly educated, academically accomplished and appropriately credentialed individuals with many years of professional experience behind them. The protesting college students are the polar opposite. Their disruptions are directed towards those who are smarter and better than they are. If anyone’s speech deserves disrespect, it is that of the protesters.

It is very telling to compare Elman, Divine and Romirowsky’s experience to the treatment of CUNY law school’s recent graduation speaker Nerdeen Kiswani. Kiswani’s graduation speech was toxic, redolent with anti-Zionist and antisemitic racism. Indeed, she kicked off her address with an antisemitic conspiracy theory, complaining about “facing a campaign of Zionist harassment by well-funded organizations with ties to the Israeli government and military on the basis of my Palestinian identity and organizing.”

Kiswani is a leader of the racist anti-Israel movement at CUNY. Canary Mission, a website that tracks and catalogs antisemitic and anti-Israel activism, has a voluminous file on her. It notes that she has “spread hatred of America, incited hatred against pro-Israel donors, promoted hatred of Israel and demonized Zionism.” Furthermore, Kiswani has “glorified intifada, honored leaders of the Popular Front for the Liberation of Palestine (PFLP) terror group and expressed support for other terrorists.” If anyone’s safety is imperiled in this situation, it is the Jewish students targeted by Kiswani’s monstrous hate speech.

Unsurprisingly, Kiswani’s speech was regularly met with applause, but more significantly, no one in the audience — in which there were undoubtedly many Zionist Jews and other pro-Israel individuals — attempted to shout her down or otherwise disrupt the speech.

Shutting down speech is more than just unconstitutional. It violates one of the primary values of a university. When members of the academic community ignore those values and violate free speech regulations, there must be swift and significant consequences. The sanctions should be publicized well in advance of any event, so that students understand that any attempts to suppress the speech of others with whom they disagree will not be tolerated. Students should not and cannot be allowed to take over a campus, lecture hall or classroom and hijack the robust exchange of ideas.

As the great jurist and champion of free speech Louis D. Brandeis once said, “If there be time to expose through discussion the falsehood and fallacies, to avert the evil by the processes of education, the remedy to be applied is more speech, not enforced silence.”