Considering ‘The Making of a Halachic Decision’ 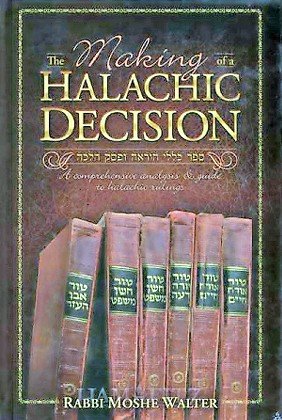 In “The Making of a Halachic Decision,” Rabbi Moshe Walter leads us through the route that has been traversed through the ages by our great halachic decisors. Using a simple straightforward style, Rabbi Walter explores the history of halachic decision making, beginning with the Rif and the Rambam and continuing through the Mishnah Berurah and contemporary halachic works. Comprehensive definitions of halachic terminology are elucidated along with the laws of ruling on halachic queries and their application.

Drawing on his broad background in Torah learning, Rabbi Walter illuminates the complex world of p’sak halachah, complete with extensive footnotes for scholars and a glossary of names and terms for beginners. In this groundbreaking work covering a range of fundamental concepts, your questions on the halachic process will be acknowledged and examined ultimately resulting in an infinitely deeper application of the ins and outs of this area of Torah.

The Gemera in Shabbos53 relates an interesting event: When the Sages entered a vineyard in Yavneh, they said the Torah would eventually be forgotten from klal Yisrael proving this point from various pesukim in Tanach. The Gemerah then cites a disputing opinion. Rabbi Shimon bar Yochai exclaimed, “Heaven forbid that the Torah will be forgotten from Yisrael.” He proved his point by reinterpreting one of the verses that indicates the eventual disappearance of Torah to mean, “They will not find clear halachah and clear teachings in any one place.”

One does not have to look very far to see the fulfillment of Rabbi Shimon’s prophecy. Students of halachah know that this area of study is marked with machlokes (dispute) and disagreement. This, however, does not mean that the study of halachah never leads to proper conclusions; on the contrary, because of machlokes, correct halachic opinions ultimately emerge. Just as we witness machlokes in halachah over the generations, we also see how these disagreements bring us to greater truth and deeper understanding of halachah and its practice.

A second lesson as well can be gleaned from Rabbi Shimon’s resolution. The fact that the verse indicates that mishnah and halachah will never be agreed upon by all should not stop one from immersing in the depth of Torah. It is Hashem’s will that the Torah be fraught with machlokes, yet it is still our responsibility to try to achieve a level of halachic understanding.

In a letter to a disciple, Rav Salanter writes:

“The thing that truly stands at the apex of the world is giving thought to strengthen the situation of dissemination of halachah in Israel, as the foundation of religion leans upon it; to instruct the nation the deeds that should do.”

Clearly, the responsibility to clarify halachah is not a contradiction of Hashem’s ultimate will but is rather an absolute requirement. It is my tefillah that this work will narrow even slightly the gap that stands before a greater understanding and appreciation of the halachic process.”