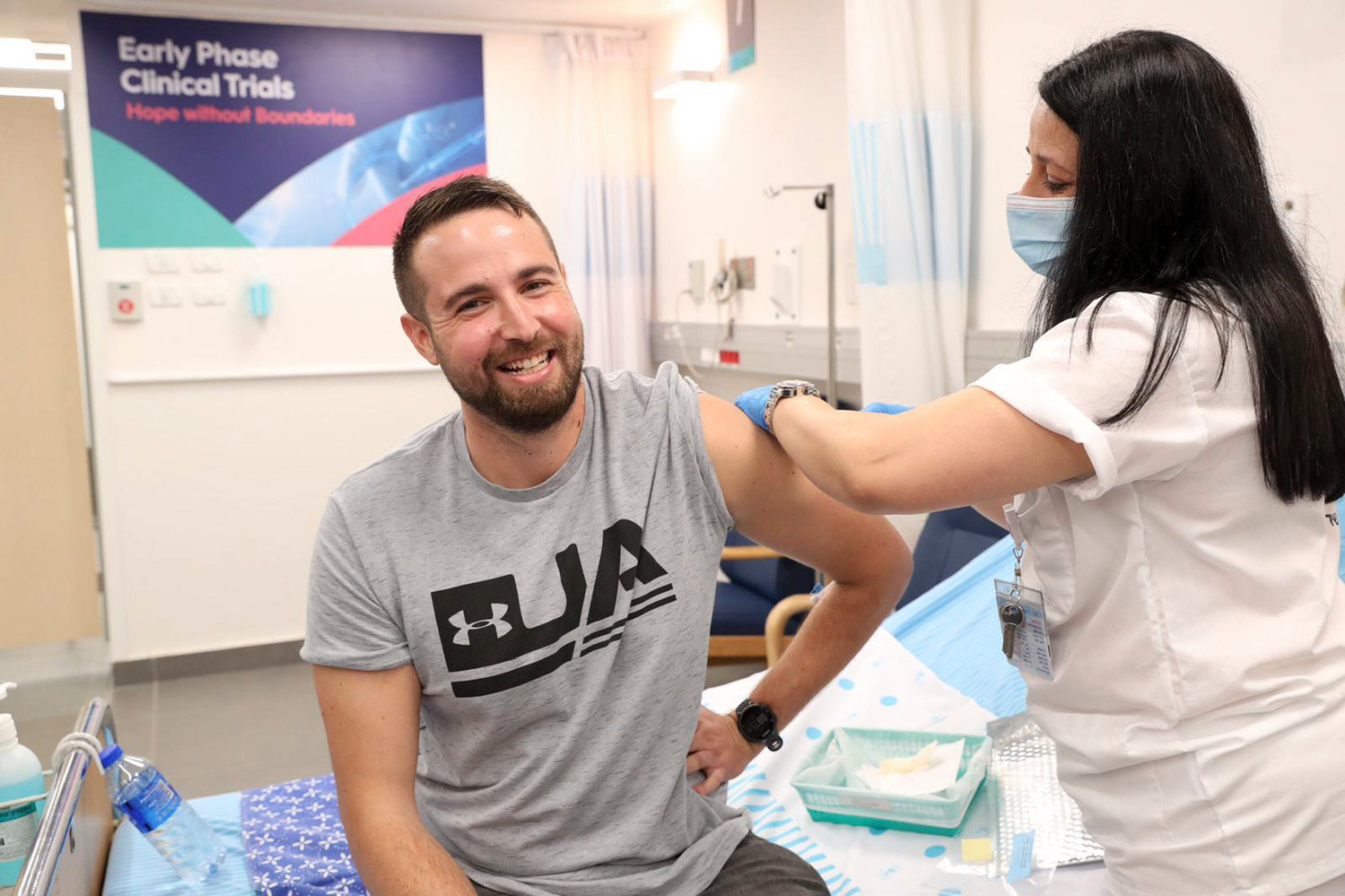 The first Israeli SARS-CoV-2 vaccine was administered at Sheba Medical Center at Tel Hashomer in Ramat Gan on Sunday to the first volunteer in a clinical trial.

The vaccine, called “BriLife,” was developed by the Israel Institute of Biological Research (IIBR), which has prepared 25,000 doses ahead of the 80-person trial. Half of the volunteers will be given the vaccine (or a placebo) at Hadassah University Medical Center in Jerusalem, and half at Sheba Medical Center.

In the first stage of the trials, the volunteers, ages 18 to 55, will be monitored for antibodies and side effects for three weeks after receiving an injection (vaccine or placebo).

The second, wider stage is set to begin in December, and will involve extensive safety tests on a group of 960 healthy volunteers in several medical centers across Israel. The third and final phase, which is scheduled for April or May, depending on the success of the first two stages, will test the vaccine’s efficacy with the participation of up to 30,000 volunteers.

The first dose was administered on Sunday at Sheba to Segev Harel, 26. The second was given to 34-year-old Anar Ottolenghi at Hadassah.

At a press conference at Sheba to mark the event, IIBR head professor Shmuel Shapira called the start of the clinical trials “a historic moment.”

This achievement had been made in record time, he said, despite the fact that the IIBR had taken no shortcuts “of the kind enjoyed by the big corporations.”

“They all took shortcuts — we went the whole way,” he said.

“It should be remembered that this trial is based on a virus that has already been used for vaccines against Ebola [so] all things considered the risks are very small,” said Professor Dror Haratz, deputy director general of research and development at the hospital and the chairman of the Helsinki Committee that deals with research approval and human experimentation. “And despite this, we are taking every possible precaution to protect the volunteers’ safety in this trial.”

“I can tell you that the State of Israel is considered to be a leader with respect to the regulation of clinical trials,” he added.

Prime Minister Benjamin Netanyahu, who was present at the event, along with Defense Minister Benny Gantz and Health Minister Yuli Edelstein, said that a viable vaccine represented the true end of the pandemic in Israel.

“Therefore, this is a very important day, a day that gives us all — please forgive the expression — a shot in the arm,” he said. “With G-d’s help, we will have a vaccine made here in Israel. This is a very big thing.”

In parallel with the development of an Israeli vaccine, said Netanyahu, Israel has been working with the big pharmaceutical companies, with the assistance of the Health Ministry, for access to their vaccines.

He had also reached out personally to various world leaders, he said — including German Chancellor Angela Merkel, US Vice President Mike Pence, Indian Prime Minister Narendra Modi, Russian President Vladimir Putin and Italian Prime Minister Giuseppe Conte — to ensure Israel “was at the front of the line, not the back.”

“What’s important is that, by whatever means, by means of local production that has been developed here or through the import of vaccines from abroad, we will get enough vaccine for all citizens of Israel.

“Then, finally, at long last, with G-d’s help, we will be free of the pandemic,” said Netanyahu.

“I do not think that this will happen immediately, but I do tell you that I already see the light at the end of the tunnel — I see vaccines in the State of Israel,” he said

“Therefore, I have one request: that you pay heed to the regulations of the Health Ministry and corona Cabinet, which are designed for the benefit of the citizens of Israel. This is to safeguard your lives and your health. Above all, wear masks over the nose and mouth.”