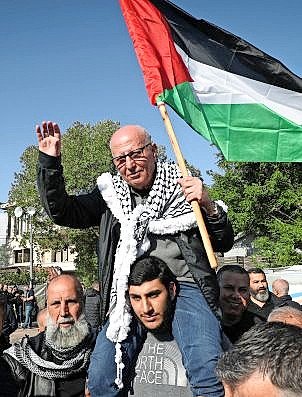 As his boss, President Joe Biden, has done in the last two years, Blinken gave assurances that the administration was committed to Israel’s security and its alliance with Washington. He also paid lip service to a desire to “advance mutual interests,” including Israel’s further integration into the Middle East and a need to address the threat of a nuclear Iran.

He then got to the real purpose of the call: to “emphasize the continued US commitment to a two-state solution and opposition to policies that endanger its viability.”

This is more than opposition to the presence of Jews in the heart of their historical homeland in Judea and Samaria, or to Jewish rights in all of Jerusalem, including its holy places, such as the Temple Mount. It’s a policy mindset that further empowers forces like Hamas and the supposedly “moderate” Palestinian Authority, the ultimate aim of which is the destruction of, not coexistence with, Israel.

This is the same message that the Israelis have been receiving from both left-wing and mainstream American-Jewish groups and leaders grudgingly welcoming Netanyahu’s new government. They still cling to the illusion that the phrase “two-state solution” is a magic formula that must be propped up despite the evidence of the last three decades that the Palestinians have no real interest in it.

This is in stark contrast to public opinion in Israel, where even most of those who voted for the Yair Lapid-led coalition that was defeated by Netanyahu’s right-wing/religious bloc want no part of the kind of policies favored by Biden and liberal Jews abroad.

Lapid may have nodded to a two-state solution as a theoretical ideal, but neither he nor his political allies campaigned on the issue, focusing instead on a failed effort to persuade a majority of voters that Netanyahu was a criminal and his coalition a pack of irresponsible extremists. Other than for far-left parties like Meretz, which failed to garner enough votes to win seats in the Knesset, the “peace process” with the Palestinians is a dead letter in Israeli politics. Still, few American-Jewish liberals, for whom this issue is an article of faith, seem willing to grasp that their Israeli counterparts have largely discarded faith in the two-state myth.

The release on Thursday from jail of Karim Younis, Israel’s longest-serving security prisoner, is an example of an incident that has a profound impact on Israeli public opinion, but makes no impression on Americans.

The 65-year-old Arab Israeli from a village near Haifa was one of three terrorists who, in 1983, kidnapped and killed IDF Cpl. Avraham Bromberg, 20, when he was on leave and hitching a ride home.

The three members of the Younis family were convicted of murder and sentenced to death, but had their sentences commuted to life in prison. One of them, Karim’s cousin, Sami — who had instructed his two younger relatives to commit the murder — was released in 2011 as part of the deal to free abducted Israeli soldier Gilad Shalit from Hamas captivity in Gaza.

The sentences of Karim and Maher Younis were reduced in 2012 to 40 years in prison by then-Israeli President Shimon Peres at the behest of US Secretary of State John Kerry. The move was intended as a goodwill gesture to the PA as part of the Obama administration’s many failed attempts to broker a two-state deal.

While Maher is expected to be released in a few weeks, Karim had the distinction of being the terrorist serving the longest consecutive time in an Israeli prison. Anyone who was expecting the latter to emerge after 40 years in jail a changed man repenting for his callous crime, or for his release to be ignored by fellow Arabs ashamed of his conduct, knows nothing about Palestinian society.

Indeed, he was defiant upon his release, expressing pride in his evil act and stating that he would have been glad to give another 40 years for the Palestinian cause. Despite the efforts of Israeli authorities to ensure that the event be a low-key affair, Karim Younis was treated to a hero’s welcome in his village where, draped in a Palestinian flag, he was carried around on the shoulders of his many admirers.

It should be noted that his hometown is not in the disputed territories, but inside pre-1967 Israel. Yet he and those cheering his return spoke as if they, too, are “occupied.” Moreover, as Palestinian Media Watch director Itamar Marcus noted this week, not only has he been honored and financially rewarded by the leadership in Ramallah, he was the focus of a recent campaign, organized in PA schools, in which 40,000 students wrote letters welcoming him home and lauding him as a role model.

This is hardly an isolated case. As a shockingly biased article published last week in the New York Times showed, Palestinian society is obsessed with honoring “martyrs” who died trying to kill and injure Israelis and Jews.

The conceit of the piece centered on assertions that the Israel Defense Forces have been killing growing numbers of civilians, and that 2022 had been the “deadliest year” since 2005 for Palestinians. But efforts to smear the IDF are being undermined by the fact that most of the Palestinian casualties from such encounters involve operatives claimed by Hamas, Islamic Jihad or terror groups like the Al Aqsa Martyrs Brigade, associated with the Fatah Party that runs the PA

As Honest Reporting pointed out, 90% of those killed by the IDF were involved in violent incidents, with 60% taking part in armed attacks on Israeli civilians and security forces, and the rest being participants in riots. The claim of IDF targeted killings of innocent Palestinian civilians is worse than bad reporting on the part of a journalist biased against Israel, as CAMERA noted in an article on Times correspondent Raja Abdulrahim; it’s a blood libel.

Lies about Israeli actions aside, a crucial fact repeatedly omitted from most coverage of the conflict is that the factions competing for popularity among Palestinians understand that the way to gain political influence is by playing a role in terrorism and shedding Jewish blood. The problem is not just that the PA engages in a pay-for-slay scheme that rewards Younis and his ilk with salaries and pensions. It’s that such an incentive is so popular that neither PA leader Mahmoud Abbas nor any of his potential successors would dare end it.

The valorization of terror is an integral element of Palestinians’ culture. It’s part and parcel of the way their national identity is inextricably tied to the century-old war on Zionism.

Palestinian protests are not motivated by grievances about Israeli policies or aspirations for statehood. Rather, they are about rejecting the legitimacy of a Jewish state, no matter where its boundaries might be drawn. That’s why Abbas and his predecessor, Yasser Arafat, refused numerous compromises and peace offers, dating back to the Bill Clinton administration, which would have resulted in the establishment of an independent Palestinian state.

This leaves Israel with an anomalous situation in which it must not relinquish security control over Judea and Samaria (the West Bank), even as the Palestinian population is governed in most of the area by Fatah and by Hamas in Gaza, which has functioned as an independent Palestinian state in all but name since the 2007 coup that ushered in the rule of the radical-Islamist group.

All of the above explains why Israeli voters turned their backs on parties that support a two-state solution and brought to power a coalition that has stated its determination not to tolerate more Palestinian terrorism.

Unless and until Americans acknowledge the reality of the conflict and the nature of Palestinian politics, the disconnect between the two countries about two states will continue. What both the administration and liberal Jews need to fienally understand is that if their coveted solution is dead, it wasn’t slain by so-called Israeli hard-liners. It was murdered by Palestinian cheer and cash for terrorists.